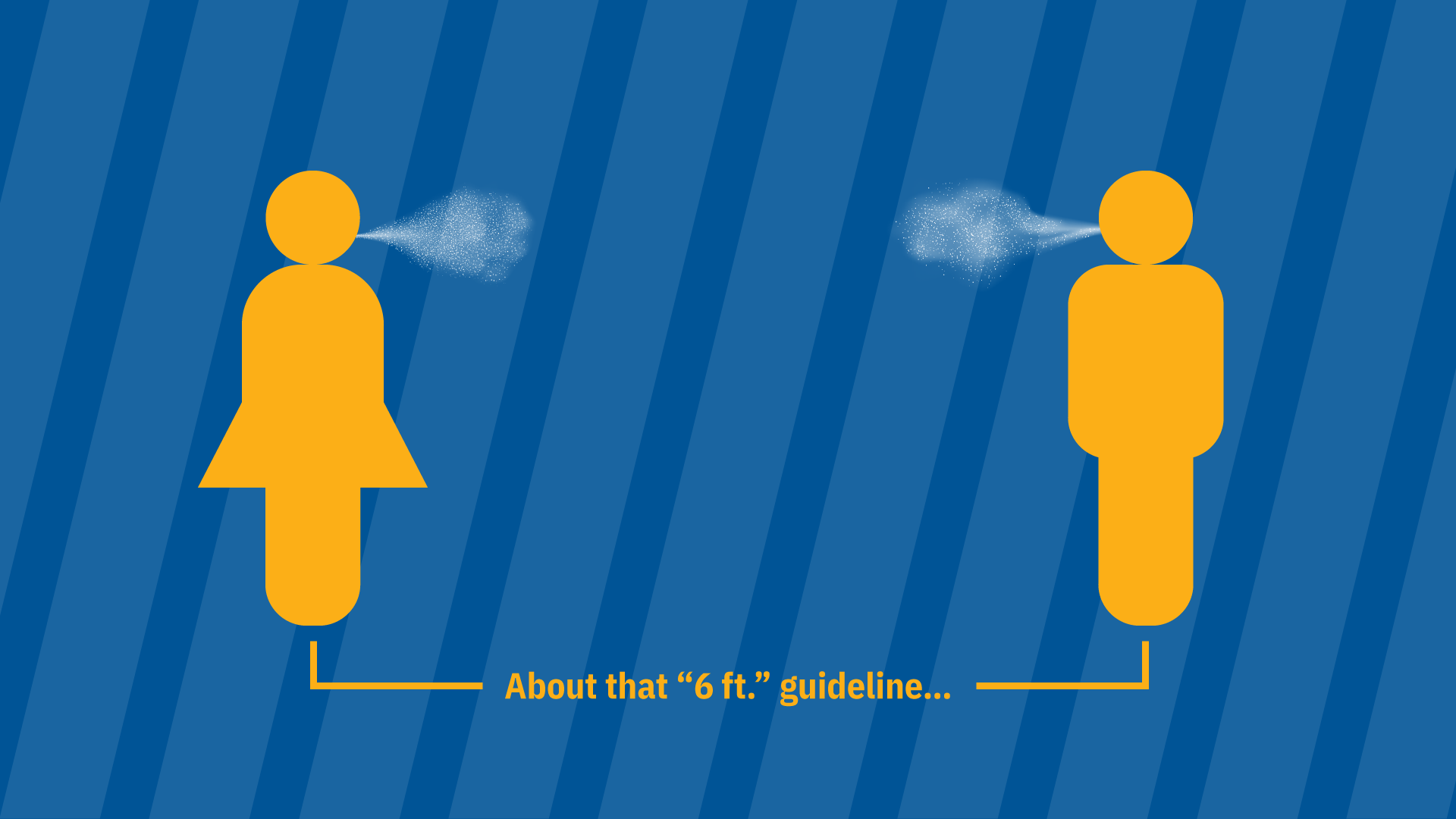 As scientific voids go, it would be hard just now to find a more pressing question: How do the aerosols that carry the invisible coronavirus travel on the air after they leave an infected person?

Is 6 feet of social distancing enough?

Into that void, University of Florida scientist S. “Bala” Balachandar is leading an international team of experts. The science is sorely in need of an update. Some of the studies on which the 6 feet of social distancing guidance is based are decades old.

Balachandar and his team, however, are working on a new theoretical framework designed to model the behavior of host-to-host airborne transmission. The task is huge because many variables are at play in figuring out how a virus-infected breath, sneeze or cough might travel from one person to another.

Physics may be able to offer answers that have eluded public health specialists. Balachandar’s expertise is in taking complex, multiphase turbulent phenomena that can’t be tested in a lab – nuclear explosions or volcanic eruptions, for instance – and developing computational models of their behavior. A cough or a sneeze also produce multiphase turbulence and are more complicated than they might appear.

“It is increasingly clear that airborne transmission is an important contributor to rapid spreading of the disease,” says Balachandar, a professor of mechanical and aerospace engineering with funding from the U.S. Navy to study atomization of liquid spray. “We don’t have the fundamental knowledge we need at this moment. Our job is to develop that kind of knowledge, and this is a starting point.”

As an established researcher with federal funding to study multiphase flow, Bala felt he was in a position to tackle the question. He assembled an international team of established scientists:  Stéphane Zaleski at the Sorbonne is an expert on droplet generation; Balachandar, and Alfredo Soldati at the Technical University of Vienna are experts on how turbulent multiphase flows behave; Goodarz Ahmadi at Clarkson University is an expert in inhalation of particles; and Lydia Bourouiba at MIT studies the intersection of fluid dynamics and epidemiology.

“Multiphase flow is nothing but flows containing particles, droplets or bubbles that are typically very turbulent, and they appear anywhere from a volcanic eruption to how a shoreline is formed to industrial processes,” says Bala, who co-edits The International Journal of Multiphase Flow with Soldati.

“It just so happens that sneezing and coughing are fabulous examples of multiphase flow, where you eject a lot of droplets and then the flow just carries them forward, and the turbulence in the rooms spreads them all around. So, we have the right background to look at this problem.”

Other scientists, too, are interested. The tiny aerosols that carry the virus got more attention in July when 239 scientists from around the world asked the World Health Organization in an open letter to acknowledge the role of airborne transmission in spreading the virus.

Then, on Aug. 4, an interdisciplinary UF team posted results of a test in a hospital room with two coronavirus patients. The team isolated live coronavirus in air samples collected about 7 feet and about 16 feet from a patient with an active infection, but not outside the room, thanks to multiple infection control practices.

“The next step is to be able to say how it got there; was it a one-time occurrence?” Balachandar says. “That’s where we come in. We want to show how and why the aerosols can travel that far.

“To stop the virus, you have to know how it travels,” Balachandar says.

The problem of transmission is pretty straightforward: To become infected with coronavirus, virus-laden droplets must leave one person as they are exhaled, be transported through the air, then inhaled by another person. Larger droplets, thanks to gravity, fall quickly, settling on surfaces. Transmission occurs when people touch the surfaces, then touch their face, bringing viral particles to mucosal surfaces in their mouth, nose or eyes. Safety protocols now in wide use – deep-cleaning offices or gyms or making hand sanitizer dispensers a staple – offer protection from surface transmission.

Protection from airborne transmission, however, is more complicated: It’s easier to avoid an icky doorknob, touchscreen or elevator button than to avoid breathing. As we inhale and exhale, we can’t see the tiny, invisible viral particles in the air we share.

Attempts to quantify pathogens in exhaled breath have a long history that goes back to 1897. Social distancing guidelines that recommend 6 feet of space for protection grew out of a 1930s study that classified exhaled moist droplets into large and small categories, and evaporation of the smaller droplets was not accounted for. In the 1940s and the 1960s, more detailed studies were done, but the technology of that time still did not allow scientists to accurately account for smaller droplets. In addition, the tools needed to study the atomization of droplets into aerosols are only just now being developed.

Other variables also complicate the quest for answers about generating, transporting and inhaling droplets.

The force of exhalation – breathing, talking, coughing, sneezing – varies as does the number of droplets exhaled in each condition and their size. Even the same condition, a sneeze for instance, can vary person to person. These exhalations, clouds that physicists call puffs, generally are hotter than ambient temperatures when they leave the body, and so more buoyant, letting them rise.

The droplets also behave differently depending on ventilation. Indoors, droplets can be trapped and remain in the air. Outdoors, they may circulate farther and disperse more quickly.

The end stage, inhalation, is affected by filtration, via masks or in the nose or the respiratory tract. At the point of inhalation, viral load becomes important, but Balachandar, an engineer, says his team will leave questions of viral load to epidemiologists.

The theoretical framework the team has developed approaches all these variables as a multiphase turbulent flow problem, leading to multiple equations.

“Like any other science or engineering problem, ultimately it boils down to some mathematical representation, which we try to make simple and easy, but at the same time, accurate enough for people to use to come up with quick answers,” Bala says.

Balachandar and the team have started on some of their own experiments, simulating coughs and sneezes.

An exhaled cough comes out in a multiphase turbulent gas cloud, or puff. The puff contains varied droplet sizes that become mixed with the ambient air, which captures the droplets and carries them forward. The droplets evaporate based on their size, the speed of the puff and environmental conditions.

Larger droplets – 50 microns or more – fall, while partially evaporated droplets stay airborne. As the droplets fully evaporate, the puff loses momentum and dissipates. The tiny aerosols, however, remain and can stay aloft for hours, their range extended by air flow, such as a breeze at a beach or an oscillating fan on a desk. This means the current social distancing guidelines may underestimate the distance aerosols travel and the time they persist in the air, and in some cases, by quite a large margin.

“This is where the difference between a small enclosed environment such as an elevator or an aircraft cabin or an open field matters, along with factors such as cross breeze and ventilation,” Balachandar says.

Work by Bourouiba earlier this year at MIT shows a gas cloud from a sneeze traveling 7 to 8 meters, a sign that more study is needed, Bala says.

“There are places, confined environments with poor ventilation, where the puff could spread far more than two meters, just as in an open environment, such as a beach with a vigorous cross breeze, it could dilute much more rapidly,” Balachandar says.

How much virus a person inhales depends on the concentration of virus-laden particles – or viral load – in the breathing zone around that person, as well as on age and activity level. It also depends on filtration. Breathing through the nose offers more protection than breathing through the mouth, thanks to the respiratory system’s natural filters. And masks provide filtration, too.

The efficacy of masks varies widely depending on the type, with masks for health professions being the most efficient: the N95 is the best, then surgical masks, then procedure masks.

The conventional assumption – that evaporation of droplets reduces the viral load – needs to be re-examined. Balachandar says it is clear that the number of viral particles emitted in smaller droplets remains within the cloud almost unchanged, representing a more dangerous source of transmission than previously considered and one that not all masks can catch.

The team’s equations also predict a much larger number of drops in the micron and submicron range, “possibly the most dangerous for both inhalation efficiency and filtration inefficiency,” according to the position paper.

Although Balachandar says he initially was reluctant to take on a new project, the need for more quantitative knowledge intrigued him.

“I first thought that COVID would go away, so I didn’t want to redirect my interest,” Balachandar says. “But then it became very clear COVID isn’t going anywhere.

“This is not an easy problem to solve,” Balachandar says. “But we need to try. Even if we solve COVID, it’s just a matter of time before something else comes along.”