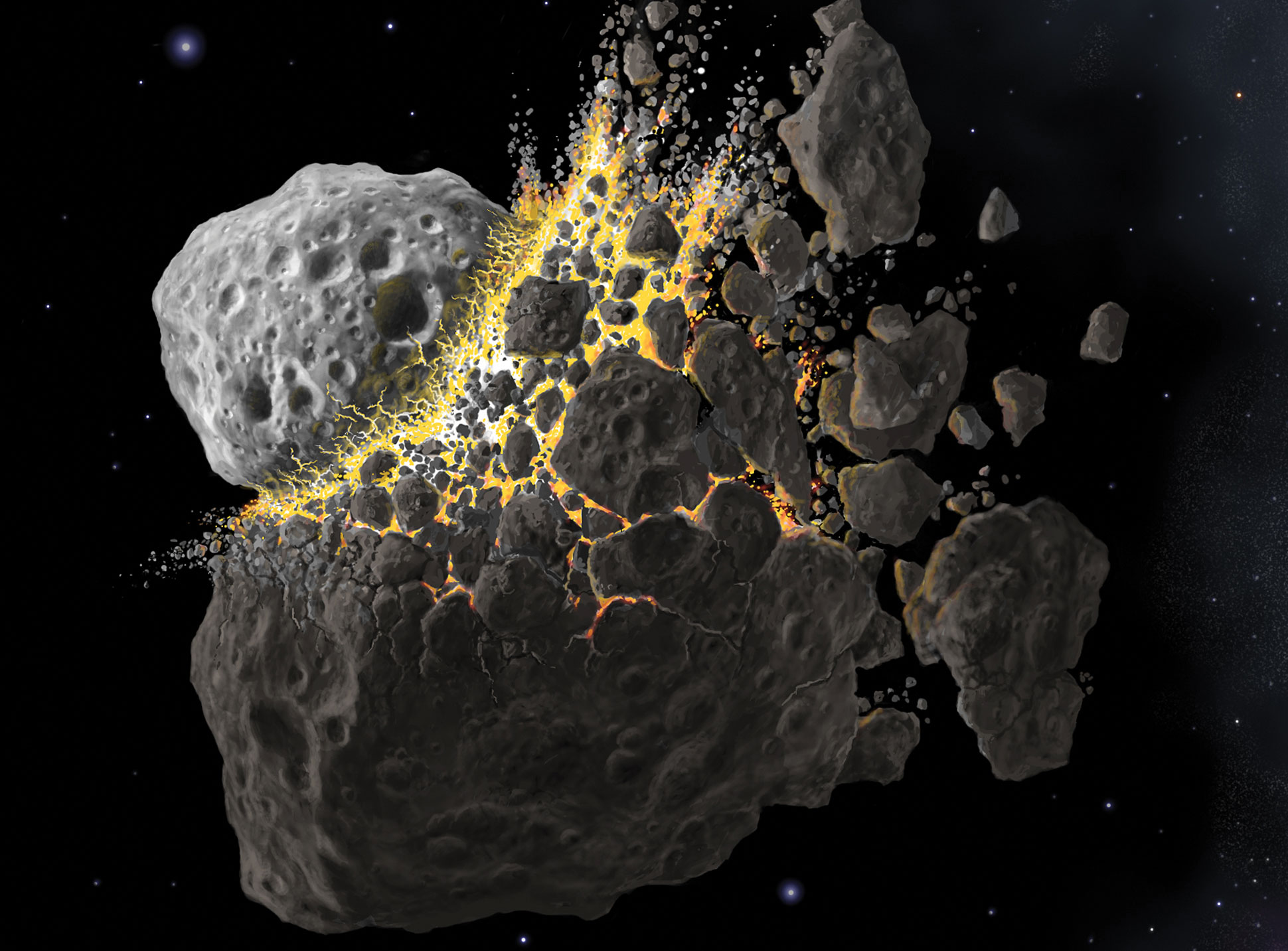 During Florida’s brief winters and fall in his native England, astrophysicist Stanley Dermott likes to take walks. One might assume these happen at night with telescope in hand. Astrophysicists love the stars, right? No, he’s more interested in the materials that shaped our own rocky planet — and others like it.

“I honestly can’t say I know much about star-gazing,” says Dermott, a professor emeritus in UF’s astronomy department. “I don’t look at the sky the way astronomers do.”

It’s not that he’s indifferent to the beauty of space. Most of what interests Dermott is too far away to be spotted by anything less than the world’s largest telescopes, or deep-space probes like NASA’s Voyager and Cassini. So, when Dermott takes walks, it’s to find time to think. His mind is filled with theoretical questions that haven’t been answered yet, usually about places that haven’t been seen.

As a theoretical astrophysicist, some of his discoveries were predictions long before space missions confirmed them, others were based on baffling observations by spacecraft that took years to unravel.

Often found working equations in a sparsely decorated office on the second floor of UF’s Bryant Space Science Center, the soft-spoken Dermott is obsessed with structure. The orbits, shapes and evolutionary changes of planets and moons, and asteroids, which characterize our solar system’s function within a spiral galaxy, have drawn his attention for the last 50 years. He wants to know how the solar system moves and has changed through time.

An expert on solar system dynamics, he co-wrote the textbook on the subject. He reformulated the structure of the solar system in terms of orbital periods, rather than distances, now called Dermott’s Law. He’s studied everything from the origin of the circumsolar ring of dust that circles the Sun to the shapes of icy satellites and the composition of the lakes on Saturn’s largest moon.

Now he’s focused on the asteroid belt: thousands of icy rocks coasting between Mars and Jupiter.

In April 2018, an asteroid more powerful than 100 atomic bombs came closer to Earth than our moon. Thousands of tons of rock fall to Earth each year. Most are the size of peas. We make wishes on them, and movies about them. Our government even has a plan to protect us from them. But what happens if a big one, a really big one, slips through the net? The dinosaurs aren’t here to tell us.

Building a more robust understanding of the evolutionary history of asteroids and the materials that form them, Dermott says, could prove essential to protecting Earth and ourselves from asteroids the size of the Statue of Liberty and more powerful than atomic bombs.

“These large bodies whiz by the Earth, so of course we’re very concerned about how many of these there are and what types of material are in them,” Dermott says. “If ever one of these comes towards Earth, and we want to deflect it, we need to know what its nature is.”

Although large asteroid impacts are rare, they played a major role in shaping Earth’s terrain. Some evidence even suggests they brought the first primordial life to our planet in the form of amino acids. But asteroids have ended life, too. Research has shown the Chicxulub impact off the modern-day coast of Mexico likely caused the dinosaurs’ extinction, leading to the takeover of mammals and eventually humans.

Orbiting between Mars and Jupiter, the asteroid belt contains hundreds of thousands of mile-wide asteroids. These asteroids fly through space in various orbits that form an intersecting web, Dermott says. In 1918, at a time when scientists had discovered only 790 asteroids in the belt, the Japanese astronomer Hirayama Kiyotsugu suggested that some of these asteroids, later known as family asteroids, had identical orbits. This argument suggested that they originated from an asteroid collision. After shattering, Hirayama thought the surviving fragments would have remained in the orbit of the original body, Dermott says.

The origins of asteroids remained a debated mystery until Dermott’s team found that most, if not all, asteroids and meteorites originate from the splintering of a handful of minor planets formed during the infancy of our solar system. Their study, which appeared in the July 2018 issue of Nature Astronomy, showed at least 85 percent of the 200,000 asteroids in the inner asteroid belt — the main source of Earth’s meteorites — originate from just five or six ancient minor planets. The other 15 percent may also trace their origins to the same group of primordial bodies.

Today, scientists have data on more than 600,000 asteroids in the belt. After analyzing 200,000 of these, Dermott’s team demonstrated that the type of orbit actually depends on the size of the asteroid, showing for the first time that all asteroids, not just those belonging to a few specific families as previously thought, originate from the splintering of a few large parent asteroids.

“This transforms our understanding of the origin of the meteorites that have crashed to Earth,” Dermott says. “These meteorites, which are fragments of asteroids that land on Earth, allow scientists to study the composition of the known source bodies in the asteroid belt, and there are intriguing differences in their makeup.”

The discovery suggests that differences in meteorites found on Earth appear because of the evolutionary changes that occurred inside a few large, precursor bodies that existed more than four billion years ago.

“I wouldn’t be surprised if we eventually trace the origins of all asteroids in the main asteroid belt, not just those in the inner belt, to a small number of known parent bodies,” he says.

Dermott plans to further investigate the structure of the asteroid belt, as he did years ago for the ring of dust around the sun and the mysterious cloud that stalks Earth.

This is not the first major discovery of Dermott’s career. In 1994, Dermott’s team showed that Earth is embedded in a ring of circumsolar dust. His team traced the origins of the ring to the asteroid belt, where collisions sent dust flying into space, following planets’ gravitational pull. But they didn’t expect to also find a colossal cloud of dust stuck permanently in Earth’s wake. When the team used NASA’s Infrared Astronomical Satellite — the first space-based telescope to survey the universe in infrared — to look behind the Earth, they always got a brighter signal than when it looked in front. Dermott and colleagues found a gravitational interaction between the dust cloud, part of the larger ring, and Earth. The cloud of dust exists because it is gravitationally trapped in Earth’s orbit.

When scientists first began looking for planets in distant systems around other stars, they couldn’t see them because the planets are comparatively small objects next to enormous stars. “It’s like looking for a firefly in the head of a searchlight,” Dermott says.

The trailing blob of dust is huge. He realized that it’s easier to spot these hot, colossal dust clouds with infrared technology than planets themselves, a finding that changed the way scientists search for planets in other planetary systems.

Years earlier, while a postdoctoral researcher at Cornell University in the late 1970s, Dermott worked with Carl Sagan, one of the most popular astrophysicists of all time, to study the possible presence of seas or lakes on Titan, Saturn’s largest moon. Titan is a hazy, fatter version of Earth. A thick nitrogen smog and methane clouds hid its polar lakes. Unlike Earth, Dermott and Sagan argued Titan’s lakes would be full of oil.

Dermott developed a tidal flow chart for the hydrocarbon lakes and determined how the lakes’ tides would affect the moon’s orbit. In 2004, the Cassini mission proved their prediction, eight years after Sagan’s death.

“The lakes were not as big as we thought, but at least we knew they were there. That was exciting,” Dermott says.

For each of his major discoveries, Dermott values communicating the findings with the public, a trait of Sagan’s he admired.

During his 16 years as chair of UF’s astronomy department, Dermott helped to raise its international reputation as a world-class center for astronomy. Under his lead, UF became a partner with Spain and institutes in Mexico in building the 34-foot diameter Gran Telescopio Canarias, now the world’s largest optical telescope. But he’s most proud of the success students graduating from UF have had getting jobs in the field.

His former student Mark Wyatt is now a full professor of astronomy at the University of Cambridge. He’s carried on the work to develop models of the evolution of circumstellar disk material, including linking clumps seen in the dust disk belonging to Vega, the fifth brightest star in the night sky, to gravitational trapping by an unseen Neptune-like planet. Another of Dermott’s students of cosmic dust and debris, J.C. Liou, is now the NASA Chief Scientist for Orbital Debris and serves as the Program Manager for the NASA Orbital Debris Program Office at the Johnson Space Center.

When Dermott was a student himself, he remembers the first time he saw Saturn’s rings through a telescope. Back then, there was nothing like seeing for the first time what you’d previously only known from textbooks. It was often that initial moment of awe that hooked new students. Today, Dermott says teachers of planetary science face a new challenge: Hollywood.

“The students are more impressed by these video effects that they see in any sort of movie about space,” he says, pointing out the asteroid belt is one of the more often seen inaccurate depictions in movies.

“They’re always in the asteroid belt and there are all these rocks crashing here and there. The thing is, that’s almost impossible.”

When spacecraft have gone looking for asteroids, they always have a tough, if not near-impossible, time finding one. Space is, well, space — it’s big and mostly empty. And asteroids are distances apart that would take months or years to travel. But, it’s been done a few times.

Eros, the first near-Earth asteroid discovered, was also the first asteroid on which a spacecraft landed. In 2001, the robotic probe Shoemaker landed on the asteroid’s surface. Dermott says he’d love to go on a space mission, but probably not to an asteroid like Eros. The closest one is a six-year round trip. Our moon is the most reasonable space vacation, he says.

For now, he’s content with pouring over data from 600,000 asteroids. Understanding the evolutionary history of the bodies that formed our early solar system helps theoretical astrophysicists answer questions related to where other planets like our own might exist. But, first, he says we have to understand the processes that produced our home planet.