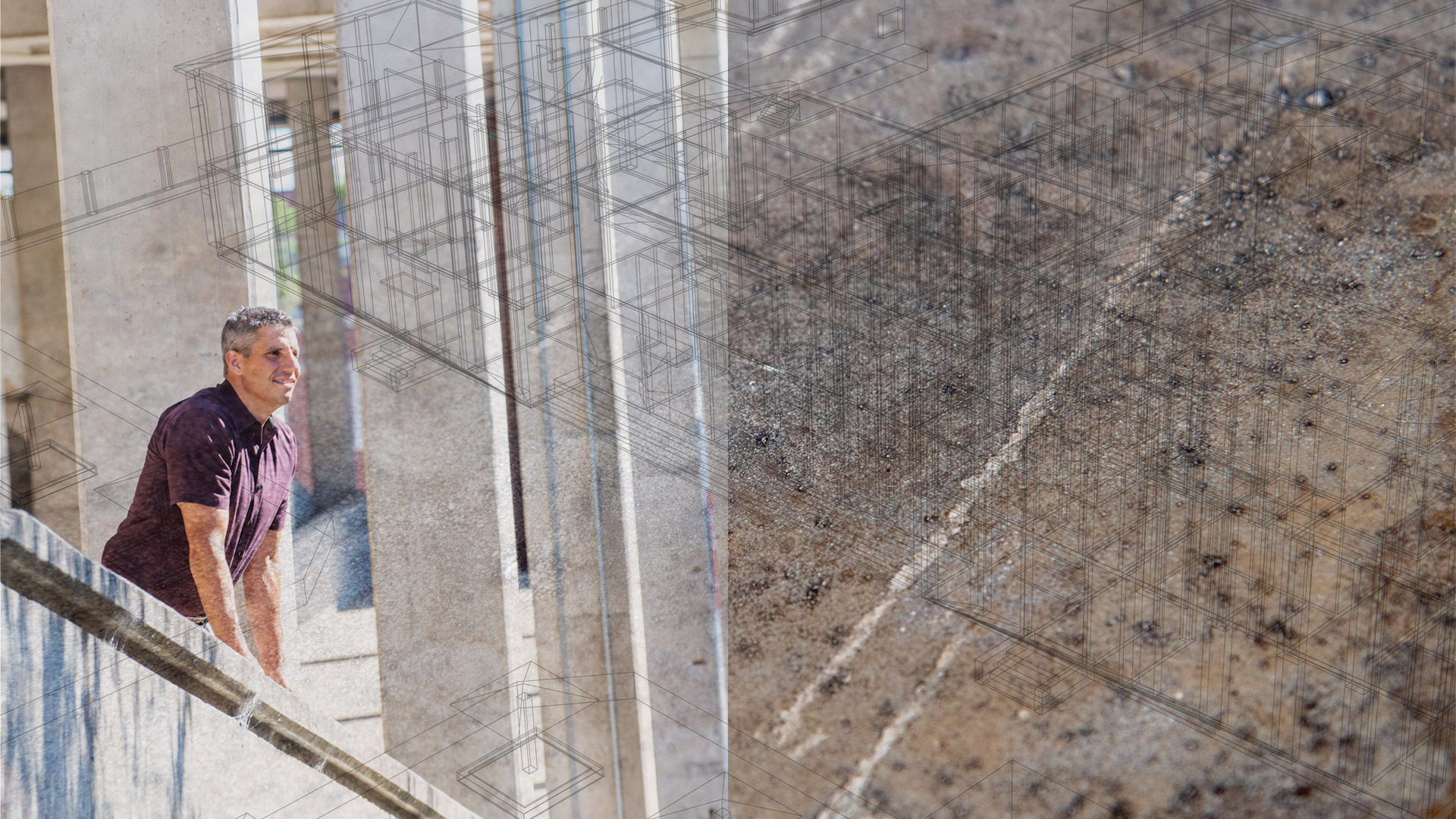 From ancient times to the space age, concrete has staying power
By Cindy Spence

The earliest known use of concrete is a floor that dates back to Galilee, circa 7000 BCE, still sound when unearthed in 2007. After thousands of years as the go-to building material, it might seem like science surely could come up with something better, perhaps a material that doesn’t crack or crumble when used in columns or sidewalks.

The problem is that many materials that are stronger or more durable than concrete don’t provide clues that something is wrong. The cracks in concrete are a signal, Ferraro says, one that can save lives.

Concrete made the news when the Champlain Towers South collapsed in Surfside, Florida, in June, with attention focused on the condition of the concrete and rebar construction, which was showing signs of wear. Concrete will stay in the news as the massive federal infrastructure spending plan takes shape, with much of the outlay going to structures that will be made of concrete.

The climate crisis, too, focuses attention on concrete, which is a contributor to greenhouse gas emissions. Still, Ferraro says, the United States today has a pretty good track record compared to other industrializing countries. China, for instance, used as much concrete between 2011 and 2013 as the United States did in the whole 20th century.

And while it’s not likely that any other material will displace concrete any time soon, the science of concrete seeks to make the world’s favorite building material stronger, more durable and more sustainable.

Ferraro points out that many of the failures that are attributed to concrete aren’t because of concrete at all, but concrete’s near-constant companion: steel.

As a professional engineer and frequent expert witness on all matters concrete from New York to Florida, Ferraro says he has seen his share of concrete, and 95 percent of all repairs to reinforced concrete structures are due to degradation of the steel encased within. When steel corrodes, two things happen. First the iron turns into iron oxide. Then, the iron oxide expands, up to seven times its original measurement. The expansion pushes against the concrete, which results in spalling, or cracking. When you see cracks in reinforced concrete, Ferraro says, it’s often attributed to the expanding steel underneath.

“Concrete lasts a long time,” Ferraro says. “What fails is the steel.”

Concrete and steel are used together to provide two kinds of strength. Concrete handles the compressive load, the weight of a structure. The steel takes care of the tensile load and allows for some flexibility. The combination of concrete and steel provide structural strength that’s hard to beat.

The ingredients in the recipe for concrete are among the most common raw materials on Earth, Ferraro says. Cement is made of limestone, sand and clay. Concrete is made of cement, plus sand and gravel and water. That makes cement — Portland cement, in particular — a key focus of research.

In Ferraro’s lab in the Engineering School of Sustainable Infrastructure and Environment, research focuses on nondestructive testing, uses of alternative binders and aggregates, infrastructure condition, and virtual testing and modeling of the concrete microstructure.

Traditionally, Portland cement is combined with a pozzolan, a material that has binding properties when combined with water. One of the most effective and common pozzolans is fly ash, which is a byproduct of coal-burning power plants. Coal fly ash also has the added benefit of recapturing a waste product of burning coal. Instead of releasing fly ash into the air or landfilling it, it is used to make concrete, and the addition of fly ash makes concrete more durable. As coal burning decreases, however, alternatives to fly ash will be in demand.

“We know that Portland cement on its own is less durable without fly ash, so we are looking for substitutes,” Ferraro says.

Concrete is porous, and one thing fly ash does really well, Ferraro says, is protect the steel encased within the concrete from chlorides that seep through the concrete layer. Pylons of coastal bridges, for example, sit in a chloride-rich environment of salt water.

“Fly ash gives us a long timeline on the initiation of corrosion and therefore extends the life cycle of the concrete,” Ferraro says.

While structures in Florida are protected from the freeze/thaw cycles farther north, and Florida bridges are spared the application of salt for snow removal, Florida faces other challenges, Ferraro says.

“We do have the world’s biggest corrosion laboratory called the Florida Keys,” Ferraro says. “So we do have to design our structures in a more robust manner for this high-chloride environment. And we do.”

But a salty, seaside environment does not automatically shorten a structure’s life span. Ferraro inspected the Miami Marine Stadium after Hurricane Andrew in 1992 and was surprised by what he found.

“I was amazed at how pristine the steel was, the rebar underneath the concrete,” Ferraro says, plucking a sample from the stadium from the specimens that line his office window ledge. The stadium, he says, was solid before the hurricane hit.

As a veteran of hundreds of structural inspections, Ferraro says he has seen poor construction practices that have scared him and poor maintenance practices that have been nerve-wracking. The condition of a structure, for the most part, is dependent on its age, how well it was constructed and how well it was maintained. Usually, he says, structures are constructed pretty well, so that leaves age and maintenance as the two main factors in structural performance.

“Personally, I’ve seen a lot of concrete in Miami, and a lot of it’s in really good shape,” says Ferraro, who is working with another engineering professor to assess inspection reporting and building conditions in South Florida for the Florida Building Commission, a part of the Department of Business and Professional Regulation.

Ferraro snags another sample off his window ledge and holds it next to the sample from the marine stadium. The rebar in the stadium sample is like chrome, gleaming. The other sample is rusty and brown.

Pointing to the stadium sample, he says, “This is Portland cement, nothing special, no amazing admixtures, and it’s literally sitting right on the water for as long as I’ve been alive. I was impressed with the wonderful nature of the concrete there.

As fly ash sources diminish and the Earth’s supply of materials to make cement dwindles, other sources of those minerals and metals are being investigated.

“There have been talks about how to harness a meteorite or asteroid to grab the minerals from within,” Ferraro says. “We’re a ways from it, but part of my job is to look at science fiction and not make it science fiction anymore.”

Until we can grab a meteor and start extraterrestrial mining, we’re stuck with finding ways to make the materials on Earth more sustainable and more durable.

About 25 to 33 percent of all industrially produced CO2 comes from the concrete industry, Ferraro says. That seems like a huge number until you consider that concrete is the number one building construction material in the world, not only each year, but historically since its invention.

“It’s still relatively green when you consider that we use as much as we have and have produced as little CO2 as we have,” Ferraro says.

If Portland cement can be amended with other ingredients, the emissions can be reduced.

“The majority of all cement produced in the world happens in one place,” says Ferraro, who also collaborates with colleagues in China, Canada, Colombia and elsewhere on sustainability research.

“We all know we’re going to have to become much more sustainable if this species is going to be able to persist on this planet,” Ferraro says. “And a lot of us are working to make that happen.”

One thing that boosts the sustainability of concrete is its durability. Once a structure is built, generally it lasts a long time, Ferraro notes.

That’s one reason concrete is the backbone of the world’s infrastructure, including the largest concrete structure in the world, the Three Gorges Dam in China.

Closer to home, concrete and infrastructure get a report card every year.

The infrastructure grades issued annually by the American Society of Civil Engineers sometimes paint a dim picture of the condition of U.S. infrastructure. The 2021 report card says:

A boost in infrastructure spending, however, could change that, and concrete structures — roads, runways, sidewalks, bridges, levees, seawalls, dams, drainage systems  — will mean more concrete. Although concrete is estimated to be responsible for 8% of global emissions, the structures built with concrete often last half a century or more.

Ferraro says the U.S. compares better to other countries than the ASCE grades might indicate, with a few exceptions. China, Japan and much of Europe have embarked on a rebuilding boom that makes portions of those countries more modern than the U.S.

One of the research thrusts for Ferraro’s lab is testing concrete. How do you test something that could last 50 years and still retire on time?

“There are a number of proxy tests that give us a good indication of the durability of the aggregates we use with concrete,” Ferraro says. “But some tests can last two years, and you don’t want to wait two years for results if you want to build a bridge next month.

“We have to be able to do rapid testing to determine whether something will last for many years.”

Part of the lab’s focus is inventing new tests  — “and arguing over the old tests”  — and giving them the highest scrutiny, Ferraro says.

In addition to traditional computer modeling, Ferraro is checking the robustness of models that use artificial intelligence and working with colleagues to develop virtual computer modeling. The training datasets to develop reliable algorithms have to be very robust, but with concrete’s long history, plenty of data are available.

“AI takes data and kind of black boxes it for us,” Ferraro says. “I think AI will have a key role in the next few years in helping us really define some of the microstructural aspects that maybe we haven’t been able to look at in the same way.

“We’re starting to ask those kinds of questions,” Ferraro says.

New developments in materials, testing and sustainability can’t come soon enough, and Ferraro says he and his colleagues stay busy.

“A breakthrough would have huge impact,” Ferraro says, “because there’s so much concrete out there.”