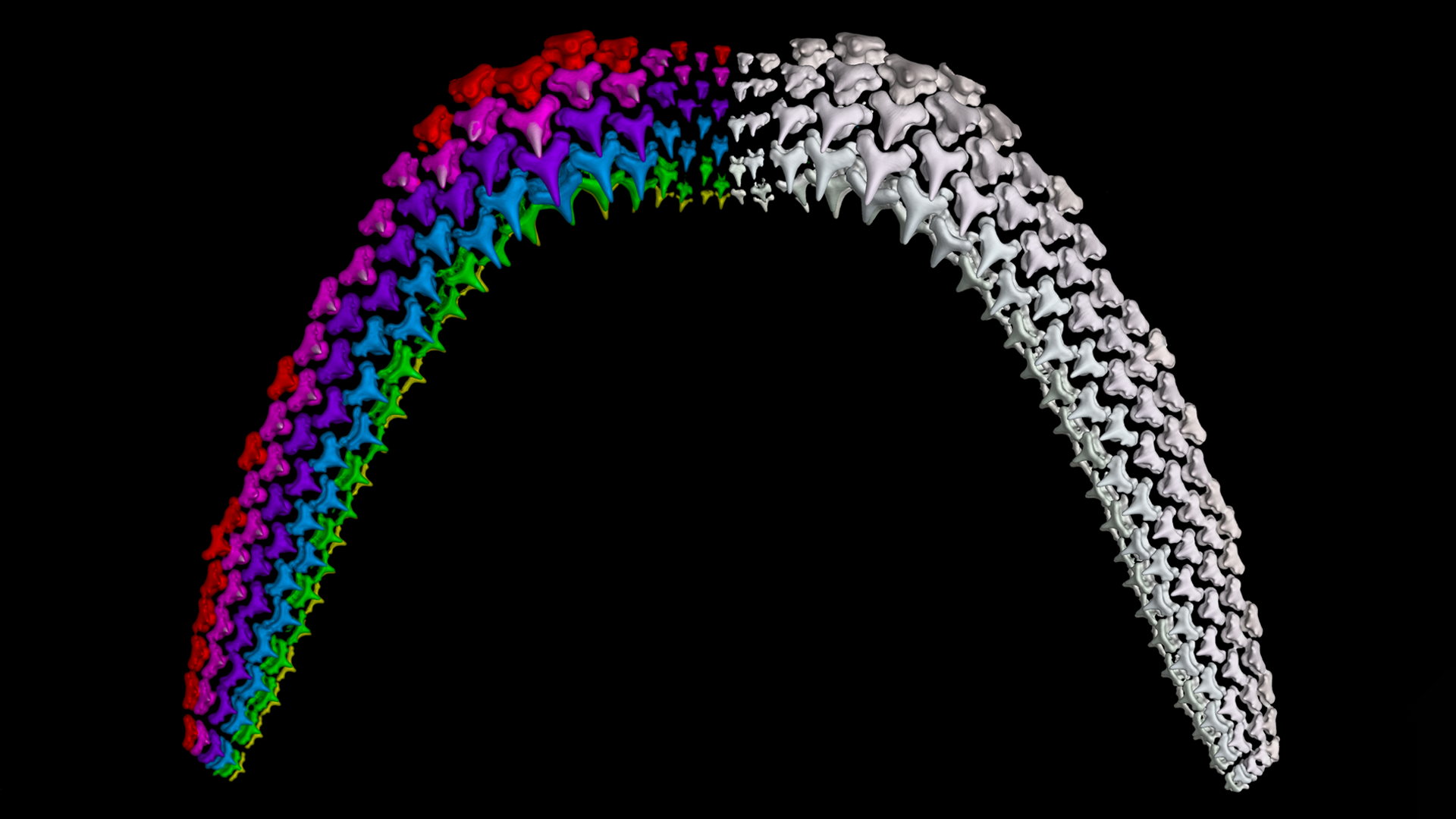 Could sharks teach us how to grow new teeth?

When UF evolutionary biologist Gareth Fraser gives a talk titled “Why sharks are the future of dentistry” at dental conferences, there are a lot of raised eyebrows.

But slide by slide, he outlines the surprising structural similarities between human and shark teeth and shows how the genetic pathways undergirding our tooth development are the same.

“We can learn a lot about mammalian and human tooth development from looking at sharks,” says Fraser, an assistant professor of biology. “They lay down almost the exact same materials, using the same cell types with the same genes.”

It’s a controversial approach to studying teeth. Mice, not sharks, have been the go-to model for human tooth development for decades. Many scientists have argued mammal teeth are special, featuring unique innovations not found in other animals. Fraser’s research, however, suggests our teeth have much more ancient roots.

Fraser grew up fossil hunting and fishing along the sweeping coastline of Wales in the village of Ogmore-by-Sea. When his grandparents brought him a pair of pufferfish skeletons from travels in Egypt, he became incurably captivated by their strange forms. Throughout his university studies and beyond, his curiosity encompassed paleontology, evolutionary developmental biology and dentistry. He found himself pursuing an unconventional question: Do fish and humans develop teeth in the same way?

Surprisingly, we do. Fraser’s research has shown that our teeth and those of all fishes, from hammerheads to deep-sea anglerfish, arise from the same band of tissue, a structure known as the dental lamina. In humans, the dental lamina degrades after we grow our adult teeth, but fish maintain this tissue throughout their lifetime, enabling them to create a continuous supply. Sharks are the ultimate masters of tooth regeneration, with some species growing a new set of teeth every two weeks.

This raises a tantalizing possibility. If sharks can regrow teeth, why  can’t we?

It’s doable, Fraser says. His work has pinpointed pockets of still-viable stem cells in the remains of the human dental lamina deep in our gums. These cells could help us unlock the ability to regenerate our own teeth — increasingly a need as humans live longer. The American College of Prosthodontists estimates that more than 36 million Americans do not have any teeth and 120 million people in the U.S. are missing at least one tooth. These numbers are expected to grow in the next two decades.

At UF, Fraser’s lab is culturing and studying sharks’ “immortal” tooth cell lines in hopes of uncovering new human dental therapies. To locate the genetic switches that enable sharks to keep making teeth, Fraser is manipulating some shark embryos to stop developing teeth — essentially “gummy sharks” — and others to kick their tooth production into hyperdrive. By comparing human tissues to the active dental lamina in sharks, his team aims to identify key gene sets and signaling pathways essential for tooth production.

“The genetic features that sharks retain may be what we need to reinvigorate the human system,” he said.

But Fraser’s not stopping there — if humans could regenerate simple organs such as teeth, why not more complex ones?

“Animals regrow things pretty well,” he says, pointing to axolotls, salamanders that can redevelop limbs and even parts of their brain. Lizards such as anoles can discard and regrow their tails at will. At the root of regeneration is developmental tissue, the malleable underpinnings that give embryos across the animal kingdom a greater ability to recover from setbacks.

“This is one of the things that makes me so excited about this science,” he says. “There’s so much that we can learn about these sorts of processes, these embryonic transitions. We sometimes overlook this beautiful process of change.”

Fraser is also studying shark denticles, the intricate “skin teeth” that armor their bodies and help them reduce drag as they move through water. In 2021, he and collaborators at Harvard and Yale Universities secured a $1.7 million grant from the National Science Foundation to examine the characteristics and patterns of shark denticles. Better understanding these structures could help engineers create artificial shark skin for airplanes, boats and cars to improve aerodynamics and reduce fuel emissions. Fraser also sees opportunities to use these patterns to explore new approaches for healing skin wounds.

Likewise, Fraser’s work co-opts features derived over millions of years of evolution, repurposing them in innovative ways. The common thread throughout his research is his own curiosity.

“I’m definitely a scientist who will only do things that are fun. Working on these strange models gives me more joy than working in a mouse lab.”