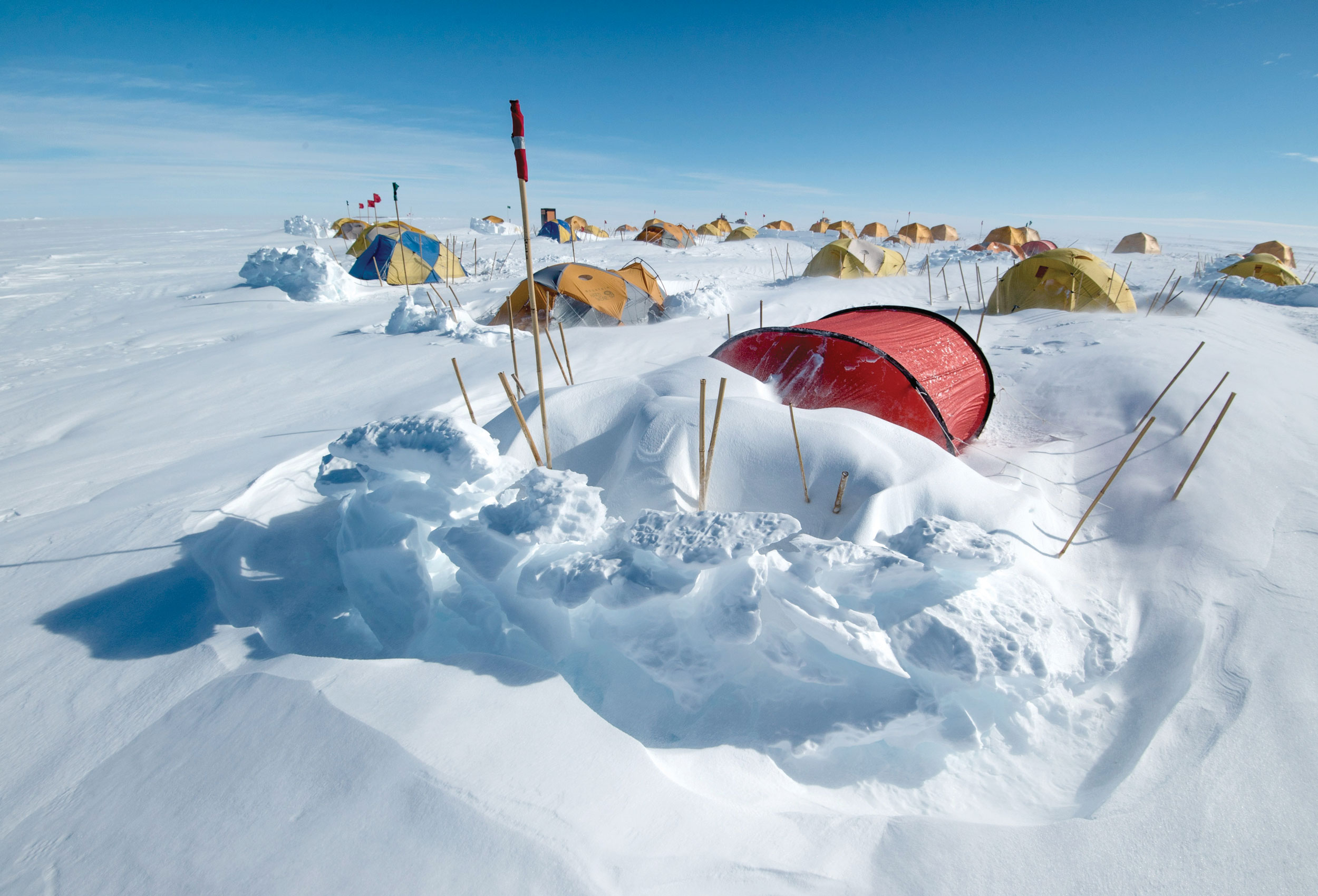 Lake beneath Antarctic ice reveals its secrets
By Joseph Kays

Standing in the perpetual sunshine and chill of the Antarctic summer last Dec. 26, UF microbiologist Brent Christner peered into a hole 60 centimeters in diameter in the ice below his feet.

Years of planning and preparation, millions of dollars and 60 hours of boring with hot water through more than 1,000 meters of ice had finally opened a window into Lake Mercer, a body of water twice the size of Manhattan that hadn’t seen the light of day in at least thousands and perhaps millions of years.

Now, Christner and his colleagues on the Subglacial Antarctic Lakes Scientific Access, or SALSA, team had just a few days to conduct a carefully choreographed series of experiments to extract as much information as possible from the lake’s water and sediment before the borehole froze up.

As a co-principal investigator on the SALSA project, Christner had spent years helping to marshal funding and resources from the National Science Foundation to transport about a million pounds of equipment and dozens of people to this desolate location just 600 kilometers from the South Pole.

An advance crew driving giant tractors — with ground-penetrating radar arrays stretched in front of them to detect dangerous crevasses in the ice — had spent almost two weeks hauling most of the drilling and scientific equipment and provisions 900 kilometers across the ice on skis from the U.S. base at McMurdo Station.

They carved a runway into the snow that enabled a specially equipped C-130 transport plane on skis to bring several dozen more scientists, students and logistical support people, and many more boxes of supplies, to the site. The researchers erected a tent city on the frozen plain and then went to work, 24 hours a day in shifts.

The varying needs of the scientists on the project — geologists, ecologists, biologists, chemists — dictated the order of the instruments that went down, and hopefully came back up, the hole, says Christner, an associate professor of microbiology and cell science in UF’s Institute of Food and Agricultural Sciences.

“You want to sample the water column before you put a core into the bottom of the lake that’s going to stir up all these sediments,” Christner says, adding that there’s another reason the researchers get water samples before sending the long, heavy sediment corer down the borehole.

“The sediment core is a big beast and the riskiest thing that we put into the borehole, because if it gets stuck, that’s the end of the season,” Christner says. “Those first water samples may be the only water samples we get. Every milliliter of that first water is accounted for, so if we didn’t get another sample there are four or five major science objectives that we could still meet.”

Over the next 10 days, Christner, UF doctoral student Christina Davis and the other scientists carefully extracted all manner of samples from the lake, analyzing some in the 40-foot-long shipping container lab on site and prepping many more for further analysis back at McMurdo Station or in Gainesville.

But the team that operates the drilling equipment had done their work well, and the borehole provided excellent access to the lake far below.

The SALSA website describes the Antarctic subglacial environment as “a dynamic ecosystem where life, ice, water, and rock form a web of complex interactions.”

SALSA is employing “an integrated approach of scientific discovery that samples from three geobiological systems” — hydrology, geology and geomicrobiology — to “learn new information about our planet’s past and gain knowledge on subglacial processes such as carbon cycling and water-ice dynamics.”

“Liquid water has been known to occur beneath the Antarctic ice sheet for more than 40 years, but only recently have these subglacial aqueous environments been recognized as microbial ecosystems that may influence biogeochemical transformations on a global scale,” Christner and his colleagues wrote in Nature in 2014 after an expedition to subglacial Lake Whillans, a smaller lake about 75 kilometers from Lake Mercer.

Scientists have good evidence that there are active hydrological processes beneath the ice streams in this region, which they described in the 2014 Nature paper as “a network of three reservoirs … that regulate water transport to a subglacial estuary at the grounding zone, linking the hydrologic system to the sub-ice-ocean cavity beneath the Ross Ice Shelf.”

The Ross Ice Shelf — the world’s largest floating ice shelf at about the size of France — holds back even more ice in land-based glaciers, so anything that might contribute to its instability is cause for concern.

“That part of the ocean, like any part of the ocean that is in a coastal region, is affected by runoff from the land,” Christner says. “But here, all that export of nutrients from the continent occurs underneath the ice, so the question remains as to how that actually influences the biological and chemical oceanographic system around Antarctica.”

Christner says that by analyzing the water and sediments cored from the bed of Lake Mercer, scientists can get a better idea of what kinds of biological processes are going on now and go back through time to understand the history of the region.

“For example, when was the last time this area was inundated — was it a 100,000 years ago, was it a million years ago?” Christner asks. “That is something that is of great interest for understanding how the dynamics of the West Antarctic ice sheet behave under rising sea levels and temperatures.”

That’s just one of the reasons Christner and his colleagues are seeking to understand what kind of life exists in these subglacial lakes. The 2014 Nature paper, on which Christner was the first author, was the first to confirm that “aquatic environments beneath the Antarctic ice sheet support viable microbial ecosystems.”

The water in Lake Whillans was rich in organic compounds, probably released from fossils buried in the lake bed millions of years ago when the area was open ocean. Those compounds supported a dense and varied bacterial life in the lake, with nearly 4,000 species and 130,000 cells per milliters, according to the Nature paper.

At Lake Mercer, Christner, Davis and their colleagues focused on gathering samples to confirm those earlier findings about bacteria and determine whether any higher life forms survive in the cold, dark environment.

Christner says that because the window to gather samples from Lake Mercer was so small, scientists didn’t waste anything that came up through the borehole, whether it was mud on the bottom of an instrument to measure the water column or samples in a device Christner designed to filter lake water through three progressively finer screens, from 3 microns down to 0.2 microns.

In some of that mud the team made a surprising discovery — what looked like remains of crustaceans. But even after further analysis at McMurdo Station, it was unclear how long the creatures had been dead or where they came from.

Based on those initial observations, however, Christner and Davis decided to get one more water sample with just the largest filter in place to only capture larger creatures.

“We wanted to see if we could actually find anything eukaryotic (multi-celled),” Christner says. “We looked hard at that filter and we didn’t see anything like they found in the mud, so we put the samples in a tube and we froze them and we’ll analyze them more closely when they get back to our lab.”

Davis is particularly focused on messenger RNA, because the presence of the short-lived genetic material can help distinguish between creatures that are living in the lake today and ones that died thousands of years ago.

“DNA can be preserved for a very long time, so that could be dead or dormant organisms, but mRNA breaks down super quickly so the presence of mRNA tells you something,” Davis says.

Davis spent the latter part of her journey stabilizing and packing hundreds of samples for shipping to Gainesville, where she and Christner will use state-of-the-art microbiology tools, like nucleic acid sequencing and bioinformatics analysis to tease out the how the ecosystem functions in the cold, dark lake.

That knowledge will not only inform how systems work on Earth, it might also help planetary scientists plan exploration of extraterrestrial bodies, like Europa, the water-covered moon of Jupiter.

“This is not even close to the conditions on a place like Europa,” says Christner, who is also involved in planning for a future NASA mission to the Jovian moon. “But when you’re looking at a system like Europa and you’re trying to understand what could live there, it’s the closest thing that we have on Earth — something that’s under kilometers of ice, isolated from inputs from the surface, isolated from the possibility of photosynthetic activity.”

“Even though people have been doing biology in Antarctica for over 100 years, really most of the continent — and it’s about the same surface area as Russia — was believed to have very little life,” he says. “In just a few decades, we’ve seen that transform. What is the essence of Antarctica is covered by ice that is an average of two kilometers thick. Up to a decade or so ago, scientists thought it wasn’t a place where life could exist, but this research clearly shows that there are different kinds of life in Antarctica. It’s the biggest wetland on our planet.”

This article was originally featured in the Spring 2019﻿ issue of Explore Magazine.