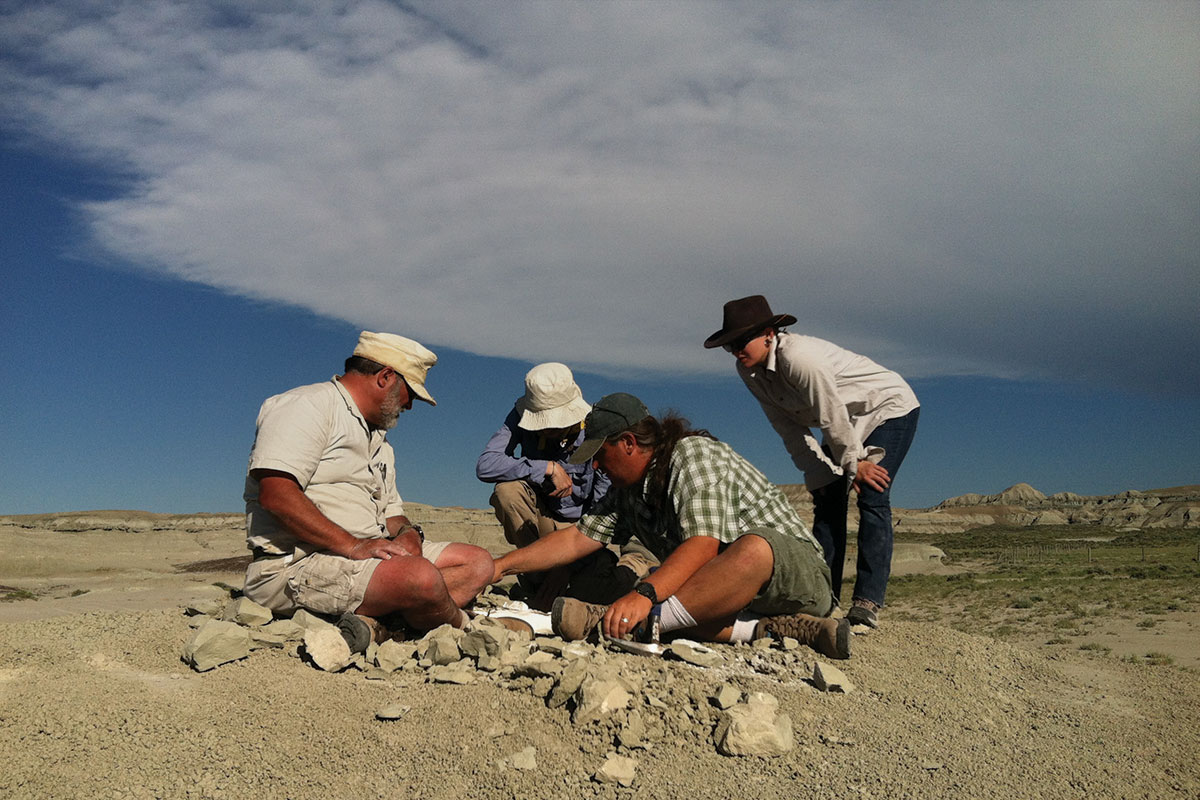 About 56 million years ago, something weird happened to the planet that has not happened before or since.

The temperature spiked by 5 to 8 degrees Celsius, mammal biology went haywire, and primates showed up on the scene. The Paleocene Eocene Thermal Maximum was almost like a hot button for evolution.

“There’s this giant hyper-thermal spike in temperature, and then all these mammals were there, and they never went away. They radiated out into the diversity we see today,” says Jonathan Bloch, curator of vertebrate paleontology in the Florida Museum of Natural History. “It was a really dramatic event.”

Dinosaurs died out 10 million years before the Paleocene Eocene Thermal Maximum (PETM), and there have been glacial and interglacial cycles — alternating cold and warm periods — since. But the rapid global warming of the PETM was unique, marked by an overall increase in biodiversity, during a time with palm trees and alligator ancestors in the Arctic.

During the PETM, Bloch says thousands of petagrams of carbon were released into the seas and air, oceans acidified and global temperature increased. Scientists know this because no matter where you find rock from that time period — lasting about 170,000 years — the samples contain more enriched carbon than rocks in layers before the PETM and after. Bloch says it’s a carbon signature recognizable in rock records on land and in the ocean floor around the world.

The PETM caused a major extinction of tiny sea creatures called foraminifera, but on land, mammals responded differently to the abrupt change in climate.

The PETM might be just an interesting anomaly if current atmospheric carbon levels and global temperatures were not breaking all the short-term records humans have. Modern humans have only been on the planet for about 200,000 years, and people have only kept temperature records since 1850, so humans, and human records, are mere blips on the geologic time scale.

To find conditions somewhat parallel to today’s, you have to go back in geologic time, and scientists have ways of doing that. By drilling ice cores in Antarctica, they can assess past climate conditions layer by layer, gathering data covering about 800,000 years. Sediment cores drilled from the ocean floor, which contain tiny creatures whose shells absorb carbon, can travel deeper into the past. Modern climate change, it turns out, has some similarities to ancient climate change.

On a graph of global temperature since the extinction of the dinosaurs 65 million years ago, Bloch points out the huge spike at 56 million years ago for the PETM and then a peak for today’s temperatures. Following the trajectory of the curve up to predicted temperatures for 2100, another spike appears to be in the making. The rate of change is also important. The PETM was sudden, a response to a massive dump of greenhouse gas into the sea and air, the source of the carbon a mystery still, perhaps volcanoes, perhaps methane. The source of modern greenhouse gas is known, but still sudden in its release into the atmosphere.

“We are now well beyond the highest CO2 concentration and temperature that the Earth has experienced for the last 800,000 years,” Bloch says. In projecting to 2100, there are times when CO2 and temperature have been that high but “it’s way before humans were on the planet — for example, this hyper-thermal spike 56 million years ago.”

Paleontological estimates are conservative because the timescales are huge, but the onset of the PETM is so dramatic, Bloch says, that research pegs it closer to human timescale — 5,000 years or even less.

The PETM changed Earth forever, and Bloch and his colleagues have spent two decades investigating the ways.

Bloch’s field work takes him to two very different locations — the dry Badlands of the Bighorn Basin in Wyoming and the tropical forests of Colombia in South America. Both take him back to the time before, during and after the PETM. The Bighorn Basin is the best-known place to find PETM fossils, and from digging there, Bloch says, the museum has built the largest collection documenting what happens to animals during the PETM.

In 2003, Bloch and a Smithsonian colleague went on what he calls the Death March, a relentless search all around the southern rim of the basin to find evidence of the PETM and collect fossils from that time period.

“He was talking about how we had no fossils of the forests during the PETM, and I was talking about how little we knew about this strange event when it came to mammal evolution because of very limited known rock that preserved vertebrate fossils from that time,” Bloch says.  “We decided we should just look for more of it, just walk into the Badlands until we found it.”

They started at a point where the PETM was documented and traced it around the basin as they went, setting in motion the next decade or more of work. Besides the scorching summer heat, the process is more difficult than it might sound. Finding random fossils is nice, but for building the story of a plant or animal, multiple fossils in reasonable condition are needed.

“I’m more excited about isolated teeth now than I have ever been,” Bloch says.

Adding plants to the picture of hyper-thermal life was important, too, and during the Death March the team discovered the first evidence of plants during the PETM.

“Why was that exciting? The forests during the climate event were totally different from the ones before or after, and what they looked like were the forests that we find in the Gulf Coast at that time. Forests literally moved about 800 kilometers from where they were into the Rockies, and once the climate event was done, out of the Rockies again, back down to the Gulf Coast,” Bloch says. “The forest was just dancing with climate change.”

Mammals, too, were adapting.

“One of the crazy things we’ve documented here is that the mammals get smaller,” Bloch says. The earliest ancestors of horses, he says, were about the size of a dog, and body size turned out to be inversely correlated with temperature: the hotter it got, the smaller the horses.

“The horses, just like the plants, are dancing, too, but they’re dancing with body size,” Bloch says. “It looks like one of the universal responses to climate change in mammals; they get smaller as the temperature warms up.”

Bloch says one of his questions is still unanswered: Does evolution speed up during extreme climate events? While evidence does show that directional evolution in body size occurs in some mammal lineages, it is harder to know how fast it is happening. That will require a lot more fossils.

The PETM, of course, ends, and temperature and carbon go back to something closer to background levels. Somehow, naturally, no one yet knows how, the carbon in the atmosphere is sequestered, pulled out of the atmosphere even faster than the rate at which it was released into the atmosphere. Mammals begin to get larger. The whole event lasts 170,000 years, a timescale almost unimaginable to humans, a pit stop for the Earth.

A different dance was going on in the Colombian rainforest in the period leading up to the PETM.

Bloch says there are questions about the antiquity of the rainforest, and the Cerrejon Coal Mine, the world’s largest open pit coal mine, began to yield answers when miners dug down into the Paleocene. There, paleontologists have found the first evidence, in the form of fossil leaves and pollen, of chocolate, bananas and beans. A barren landscape today, the mine was a tropical jungle in the Paleocene. As the coal was mined, new fossils were uncovered, and Bloch and his colleagues made eight expeditions there from 2004-2011.

“As soon as we got into the mine, we found bones, the first Paleocene vertebrates ever found in the tropics of South America,” Bloch says. Among the early finds: a snake vertebra about four times as big as the vertebra of an anaconda, the largest snake alive. A vertebra that big had to be from a monster snake, and for a snake to be that big, the planet had to be really, really hot.

Mammals adapt to extraordinary heat by getting smaller. Reptiles, however, get big, really big. Reptiles are ectotherms, maintaining body temperature and deriving energy from their environment. As the planet warmed, the reptiles just kept growing.

As the group continued to dig, more vertebrae appeared, and finally, the rarest find, a skull. Snake skulls often don’t survive to become fossils, Bloch says, because the bones are delicate. The team agreed that the fossils belonged to a new species of snake. They named it Titanoboa, the largest snake to ever live. At 42 feet and about 2,500 pounds, Titanoboa apparently had no problem with the warm climate.

The ultimate goal for paleontologists is to figure out past climate and how plants and animals responded. It would be nice, Bloch says, to have a bunch of alternate universes where scientists could plug in variables and measure responses to global climate change in real time. The next best thing is to look at Earth’s past experiments.

“The geologic record of the planet is essentially a user’s manual for how to use the planet,” Bloch says. “As geologists and paleontologists, our job is to go through the pages of that user’s manual and read the instructions and look at the scenarios.”

Bloch says there is evidence that climate models are not all on the money, but they are better than guessing. Finding which responses to climate change are more universal and which are more variable is key. The future, he says, is a new experiment.

“We can refine our models, and how do we do that?” Bloch asks. “With science.

“What I can say is the last time the Earth experienced such a rapid, large-scale climate event into territory like this, yes, some weird stuff happened,” Bloch says. “But one other thing that also happened is related to the origin of us. We can trace our origins down to that event, for what it’s worth.”