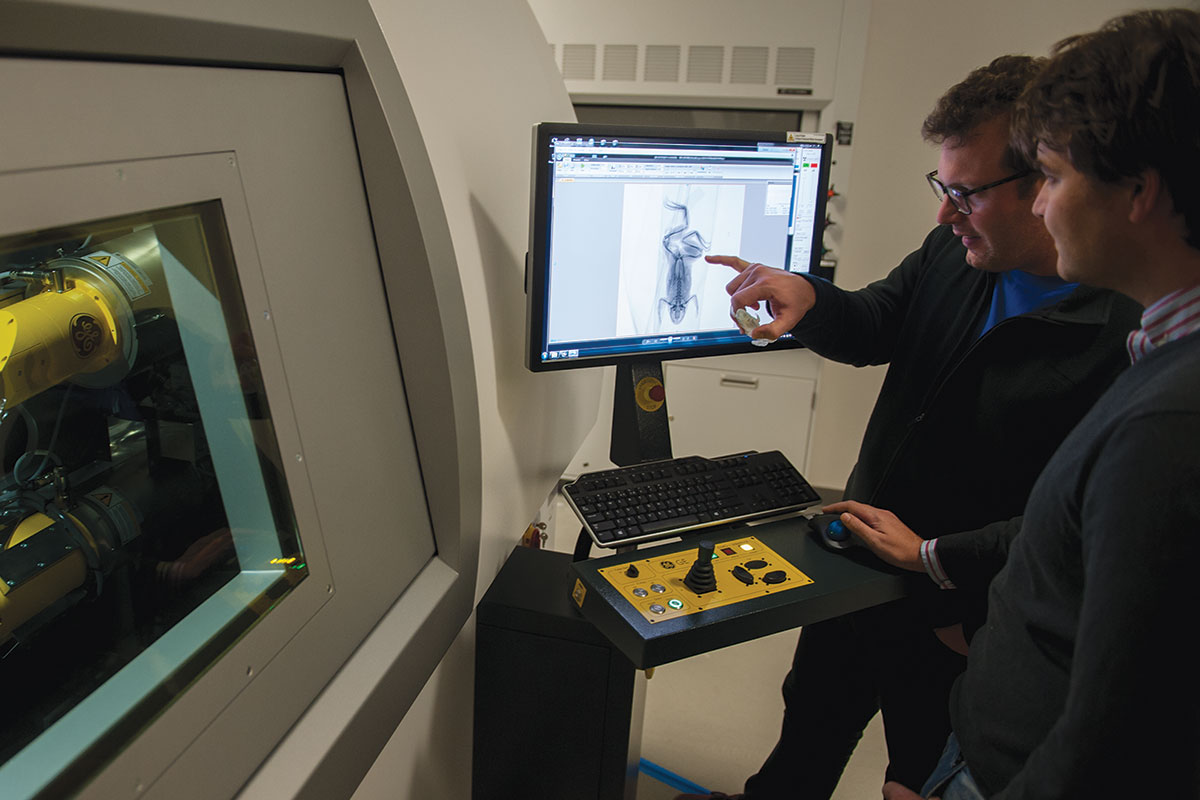 Herpetologist David Blackburn takes a jar off the shelf in the Herpetology Collection at the Florida Museum of Natural History, home to about 300,000 preserved amphibians and reptiles. Inside, suspended in a clear liquid, is a tuatara, one of the rarest creatures in the world.

Blackburn handles the jar carefully — it is the museum’s only intact tuatara — and points to the label: “Not to be opened.”

“It’s the only specimen in the collection with that label,” says Blackburn, associate curator of the herpetology collection, the eighth largest in the United States.

This unique creature, almost extinct, is the subject of fascination in the herpetology world. It is part of an ancient reptilian order that lived with dinosaurs and is the sister lineage of all living lizard and snake diversity in the world. It once roamed widely but now is only found in islands off New Zealand. When Blackburn arrived at the University of Florida in 2015, the tuatara was among the coolest — yet least-used — specimens. There is only one at UF, so dissecting it was out of the question. It had been in the collection since the 1960s but there was no publication history on it. It was glorious, but obscure.

Today, the UF tuatara could well be among the most used specimens of that species in the world, Blackburn says. What changed since August 2015? Blackburn’s arrival at UF coincided with the arrival of a micro CT scanner, and one of the first specimens he popped into the scanner was the tuatara.

As the scanner went to work, the internal anatomy of the creature was revealed, and a 3-D image took shape on a computer screen. The images alone increased the research value of the specimen, and anyone with a 3-D printer can make a model, increasing the value for education.

“The tuatara scan has been used hundreds of times, on four continents in the last couple of months,” Blackburn says. “Pretty cool for something that has basically never been used.”

Postdoctoral researcher Edward Stanley, who moved to UF with Blackburn from the California Academy of Sciences, says the micro CT scanner is taking a time-honored phrase in the scientific lexicon — beyond the scope of this study — and making it less reasonable.

In computed tomography, X-ray images can be produced and converted into 3-D images on a monitor. To get soft tissues to show up, a specimen is soaked in iodine to provide contrast, making it possible for the X-rays to produce an image. The non-destructive method makes it possible to see brain architecture, muscle anatomy, the shape and volume of internal organs, in short, things long hidden.

Blackburn and Stanley scan at a resolution of 10 to 50 microns, likely overkill for today’s research. Tomorrow’s questions?

“If the future needs a higher resolution, we’ve already collected it,” Blackburn says. “We are able to do it, so we do, to future-proof the data.”

“For a lot of species we have a name, we’ve known them for 100 years, but we don’t know the first thing about their biology,” Blackburn says. “Pretty much every soft tissue scan turns up something weird or shows us something about species interaction — like the parasites — that had been invisible.

“We can begin to eke out pieces of biology from the anatomy and use it to target field or lab research.”

Blackburn, a frog scientist, saw firsthand the power of the scanner to break a scientific logjam. In India, new families of frogs have been described in the last 15 years, but India does not export biological specimens, no matter how long they’ve been dead. The creatures were known only from journal articles. So Blackburn located a micro CT scanner in India, and sent Stanley on a two-pronged mission. He trained Indian scientists on the micro CT scanner, and scanned the new-to-science frogs. Back home, Blackburn was like a kid glued to Saturday morning cartoons.

“As Ed was CT scanning the stuff, I was getting a live stream of them to my computer,” Blackburn says. “These were families of frogs for which we’ve never had anatomical data, and they are utterly the weirdest possible frogs there are.”

The exercise opened the door to collaboration quickly, and today, Blackburn is working with Indian scientists on a project to study how these strange frogs hear, which is a cross between the two ways frogs are known to hear, one much like humans and the other through vibrations.

“We could never have begun to ask that question before.”

Blackburn has also been excited by the expanded use of the collection. Often a graduate student or researcher will cross paths with an image online and call to ask if other specimens are available for imaging. A limited number of people can walk through the door of the museum, but online, the world is welcome.

The incredible investment in asking a question — a trip across the world to India, for instance — is no longer an obstacle. Before, risky questions did not get asked. Now a question may be a gamble, but it does not cost money to ask.

Blackburn says until micro CT scanning came on the scene, knowledge about many creatures amounted to the sum of their skeletal structure. Now that soft tissue can be imaged, more questions about comparative anatomy can be explored even when there is only one representative, like the tuatara.

“We’re not going to get another one, so being able to do this virtually, dissect virtually, we can start eking out a whole new generation of data for testing ideas,” Blackburn says.

Micro CT scanning today, he says, is doing for science what the explosion in genetics did a decade or so ago. Genetic data today can quickly be sequenced and shared, and that is beginning to happen with anatomical data collected from scanning. It’s hard to share a frog electronically, Blackburn says, so scans are the next best thing.

Amphibians and reptiles are not the only beneficiaries of the micro CT scanner. Just about anything can be scanned, and Blackburn’s excitement has been contagious. Environmental archaeologist Kitty Emery has scanned artifacts, and paleontologist Jon Bloch has scanned fossils, turning to the non-destructive method to get information hidden to view.

“Take a skull like this,” Bloch says, holding a 57-million-year-old primate fossil. “With micro CT we can virtually dissect it, and we can learn about the expansion of the brain that you see in primate evolution.

“Micro CT scanning has revolutionized how we study the cranial anatomy of extinct animals.”

Blackburn has an endless appetite for scanning frogs, but also notes an urgency to the project. While 150 new amphibian species are being described each year, almost all of them frogs, discovery and extinction often go hand in hand.

“It’s an age of discovery,” Blackburn says, “but it’s also an age of loss.

“We are entering the era of paleontology for living amphibian species, describing species as new to science that are already extinct,” Blackburn says. “Just as our knowledge is increasing, we suddenly realize when we go back to the shelf that these frogs from Colombia from the 1960s are totally different from what we thought. Yet when we go back to the field, they’re not there anymore.”

Blackburn has had that experience more than once, including in Africa, where he does most of his field work. As a graduate student, he located a museum specimen from 1930 that is now one of only two specimens (the other from the 19th century) of what he dubbed the “overlooked squeaker frog,” Arthroleptis kutogundua. Yet colleagues working in that part of Tanzania have never encountered this distinctive frog.

“Could it maybe be found? I hope so. It seems to be missing in action,” Blackburn says. “Over the last 10 years, we’ve realized that frogs we’ve been studying to ask all sorts of biological questions are becoming harder and harder to find. We are losing a lot before we have the opportunity to ask the questions.”

Between habitat loss and a fungal disease, a third of frog species are threatened by extinction. In this race, Blackburn scans. Soon, anyone with an internet connection can call up a digital depository that will represent all of frog diversity, at least for now. The goal, Blackburn says, is to learn about their biology, including things relevant to humans, before they are gone.

Blackburn found a welcome mat at UF, not just at the museum, but in other departments. He says he was attracted to UF because of the diversity of sciences related to biology and the potential to find new collaborators with whom he could share a quick cup of coffee by just walking across campus.

“I love the fact that the museum is across from biology, across the street from wildlife ecology, and there are all these students in and out of the lab. There’s a web of biology happening all across campus,” Blackburn says, “and at the museum we’re in the nexus of all this amazing science that is happening.”

This semester he will revive a course on amphibians and reptiles that has not been taught on campus in a decade. His view that science should be accessible extends to much younger students as well. He has had the experience of explaining one of his projects to 8-year-olds only to have them say, “I know that already.”

“That particular bit of science was featured in kids’ books. It’s not cited very much, but 8-year-olds stop me and tell me about it,” Blackburn says.

The micro CT scanner elicits excitement on all fronts, as it lets more people virtually roam the shelves full of preserved lizards and frogs and snakes. It’s a valuable tool, he says. “All museums want this.”

But it only works in conjunction with the specimens, some protected and preserved for a century.

“People ask, ‘why do you have all this old stuff?’ Well, we use it. It’s irreplaceable, yes, but it’s being used,” Blackburn says. “We don’t have a visitor a day in herpetology, but I bet every day, someone is downloading our data and using it. None of those people walk through our door.

“I think that is liberating, and democratizing,” Blackburn says. “Pretty cool.”