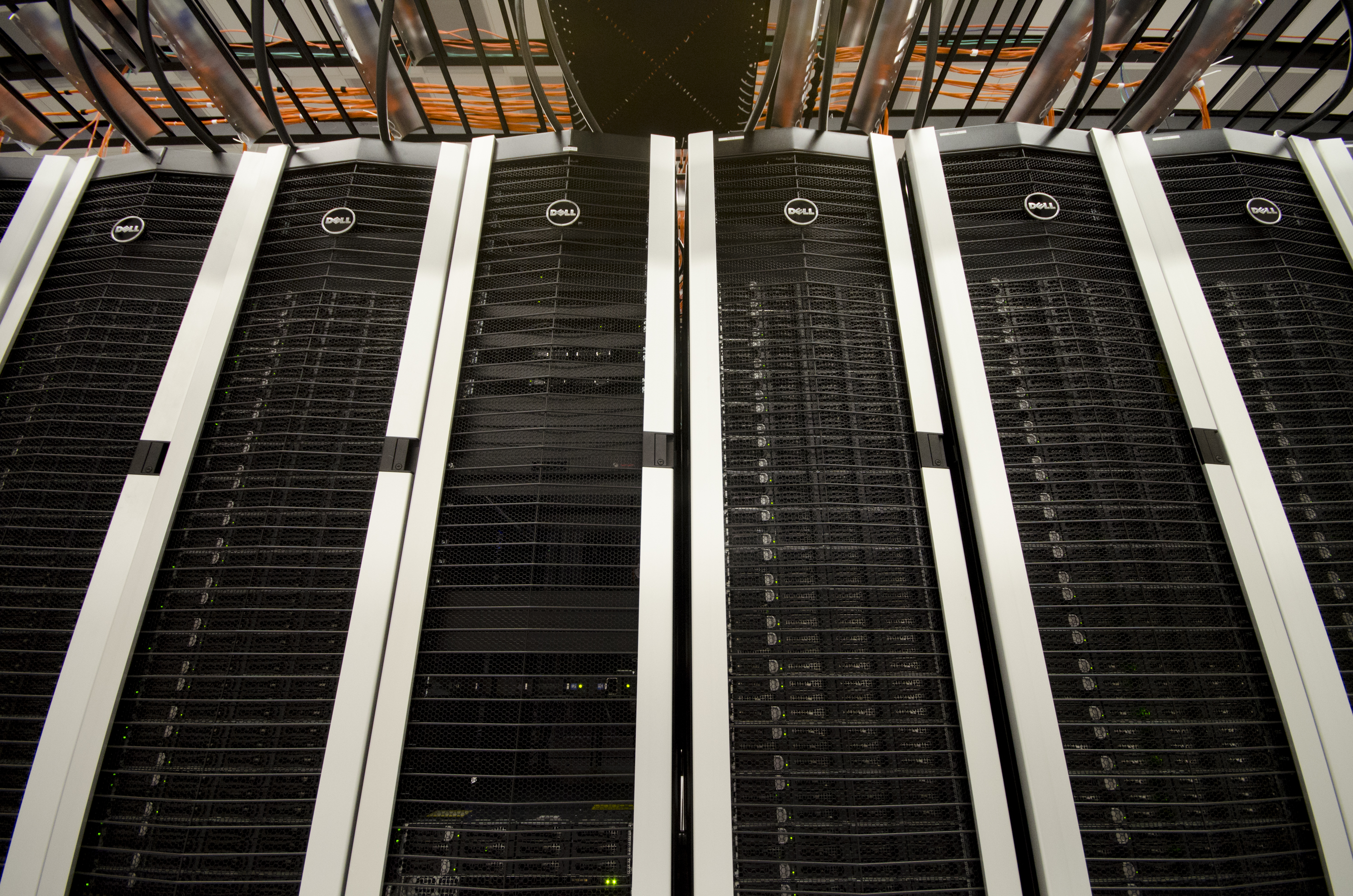 UF launches the state’s most powerful supercomputer
By Cindy Spence

The University of Florida unveiled the state’s most powerful supercomputer on May 7, 2013 — a machine that will help researchers find life-saving drugs, make decades-long weather forecasts and improve armor for troops.

The HiPerGator supercomputer and a recent tenfold increase in the size of the university’s data pipeline make UF one of the nation’s leading public universities in research computing.

“If we expect our researchers to be at the forefront of their fields, we need to make sure they have the most powerful tools available to science, and HiPerGator is one of those tools,” UF President Bernie Machen said. “The computer removes the physical limitations on what scientists and engineers can discover. It frees them to follow their imaginations wherever they lead.”

“HiPerGator can help drugs get from the computer to the clinic more quickly. We want to discover and deliver safe, effective therapies that protect or restore people’s health as soon as we can,” Ostrov said. “UF’s supercomputer will allow me to spend my time on research instead of computing.”

The Dell machine has a peak speed of 150 trillion calculations per second. Put another way, if each calculation were a word in a book, HiPerGator could read the millions of volumes in UF libraries several hundred times per second.

UF worked with Dell, Terascala, Mellanox and AMD to build a machine that makes supercomputing power available to all UF faculty and their collaborators and spreads HiPerGator’s computing power over multiple simultaneous jobs instead of focused on a single task at warp speed.

UF unveiled HiPerGator as part of a ribbon-cutting ceremony for the 25,000-square-foot UF Data Center built to house it. HiPerGator was purchased and assembled for $3.4 million, and the Data Center was built for $15 million.

At the same time, the university announced that it is the first in the nation to fully implement the Internet2 Innovation Platform, an achievement that will transform research at UF and provide a national model for research computing.

The move will allow UF researchers to easily share enormous amounts of data at ultrahigh speeds in collaborations with scientists worldwide.

“Universities across the country are following closely our progress and leadership in this area,” said UF Vice President and Chief Information Officer Elias Eldayrie. “They are looking to our experience to learn from it, and we are glad to share it.”

About 30 other universities are working to fulfill the requirements to use the Internet2 Innovation Platform, which provides the advanced networking opportunities necessary for big data research, such as genome sequencing and climate studies.

“It’s exciting that the University of Florida is the first campus to complete the three components of the Internet2 Innovation Platform. Re-architecting the University of Florida network to support software-defined networking, 100G abundant bandwidth and unique support for data-intensive science positions Florida for a new cycle of growth and scientific research,” said Rob Vietzke, Internet2 vice president of network services.

“As other universities also follow Florida’s lead to provide researchers advanced networks with their collaborators and the increased capacity of this unique 100-gigabit-per-second nationwide network, we can expect new scientific, educational and economic breakthroughs,” Vietzke said. “The whole academy of higher education can look forward to seeing how Florida innovators and researchers will use this Internet2 Innovation Platform to develop new applications and services never previously possible.”

UF is the first to achieve all three: a 100 Gbps connection to Internet2, a Science DMZ, and use of software-defined networking, or SDN.

UF activated its ultra-high-speed 100 Gbps connection in January, a 10-fold expansion of the research standard, 10 Gbps. Only three other institutions are connected to Internet2 at that speed.

The Science DMZ separates university administrative computing — transcripts and payrolls, for instance — from research computing, which requires a free flow of information without cumbersome firewalls and switches. UF has had a Science DMZ since 2004, but recently upgraded it from 20 Gbps to 200 Gbps.

Erik Deumens, director of research computing, said the Science DMZ functions as a dedicated network for research on campus, providing a kind of “HOV (high-occupancy-vehicle) lane for research.”

The third requirement was software-defined networking, which allows a researcher to program a network so a colleague anywhere on that network can view, share and manipulate data. SDN solves the problem of getting a variety of machines used by different scientists to talk to each other and ends the days of scientists filling portable hard drives with data and shipping them to collaborators.

Deumens said one of the requirements of participation in the Innovation Platform is to test the limits of SDN, which UF will do this summer in collaboration with Fermilab, a high-energy particle physics laboratory near Chicago.

On the commodity Internet, Deumens said, information travels in small packets that sometimes take odd detours and a long time to reach a destination, making huge datasets a problem. SDN allows a researcher to tell a switch at a routing station, “I’m going to send a packet, and a billion more will follow, and I want you to treat them all the same way, let them all through, quickly,” Deumens said.

UF is already a key collaborator on several big data projects and one of the top five institutions in contributing computing power to verifying the massive datasets associated with the Higgs-Boson particle discovery. In just one month last year, UF contributed 1,419,000 hours of computing to that project.

“Our researchers now have tools at their disposal that no one else in the country has. They can lead the big data conversation, and this computing infrastructure will give them a competitive advantage in securing funding,” Eldayrie said. “We can recruit the best minds in the world.”