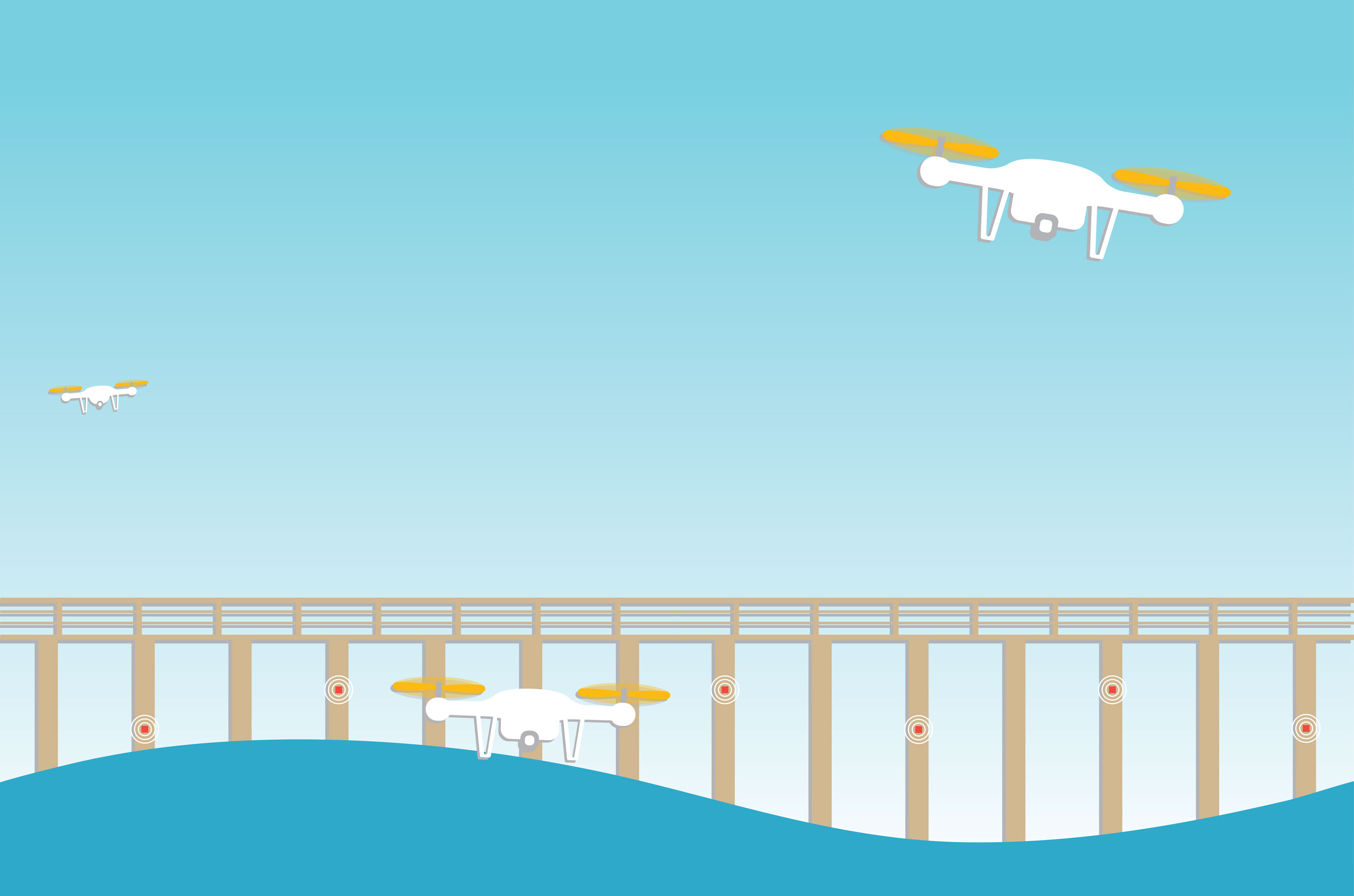 Drones fan out across the waves of Crescent Beach, sipping sea water and ferrying samples back to shore. Sensors monitor the environmental DNA of sea life and the integrity of structures like bridges and piers. High-performance computers crunch all the data and make predictions about the health of Florida’s 8,436 miles of coastline.

It’s the iCoast, and it’s only the beginning.

In a pilot program led by the University of Florida’s Whitney Laboratory for Marine Biosciences and the Herbert Wertheim College of Engineering, scientists and engineers will deploy sensors, robotics and other technology to collect fine-grained data on the health of the coastline from San Sebastian to Pellicer Creek on Florida’s east coast. Their goal is to use the data to react in real time to threats like red tide, which was especially severe in 2018, killing dolphins, manatees, sea turtles and fish by the tons, and damaging tourism so severely that the governor declared a state of emergency.

“We can shoot people to the moon, but we still can’t predict red tide, a problem that is right in our face in Florida,” says Todd Osborne, an assistant professor of biogeochemistry at the Whitney Lab, which is situated between the Atlantic Ocean and the Intracoastal Waterway. “So we thought we would use the best technology available and perhaps develop some of our own technology to sense the environment in a more rapid and novel way so we can model what is going on on the coastline.”

Osborne says a patchwork of monitoring goes on in the coastal zone today by environmental and public health agencies.

“What we’re using now is sort of last century. Literally, someone is going out with a bottle and collecting water and bringing it back to a lab to analyze it,” Osborne says. “You’ve got all these agencies — state, federal, private groups — measuring everything under the sun, and it’s all over the place. So, centralizing the effort is really important.”

Osborne and David Kaplan, an associate professor of environmental engineering and director of the H.T. Odum Center for Wetlands, say researchers plan to build the sensor devices and platforms and have them up and running this summer on Florida’s east coast near the Whitney Laboratory, which will serve as the project’s home base.

Kaplan says the three main components of iCoast are the sensors, the platforms to which the sensors are attached, and the system for integrating, modeling and using the data.

Some sensors, such as those that measure temperature and salinity, already exist, but others, such as a microfluidic sensor for detecting pathogens and algal blooms, are in development by UF engineers. Current water tests require on-site collection and analysis in a lab, a labor-intensive and time-consuming process. Kaplan says the eventual goal for the microfluidic devices is to measure pathogens directly in the water.

The sensing platforms can be bridges, piers or buoys, but also biological structures like mangrove roots or even migrating fish. Some of the network would be autonomous or semi-autonomous, such as aerial and underwater drones, Kaplan says. When the network is operational, it will provide physical, biological and chemical data that will be integrated with a model to predict environmental responses, providing an early warning system for coastal health.

For example, microfluidic sensors that detect E. coli in the water will be coupled with a model that predicts the direction of water flow in real time, giving coastal communities information to protect beachgoers from exposure. In the case of an oil spill, a sensor network could provide enough warning to put up booms to protect coastal marshes.

With better and more timely information, Osborne says, scientists can give policymakers data on which to base decisions.

“If we know what’s coming, we don’t need to wait to respond. We can have proactive solutions to our coastal water quality issues,” Osborne says. “We are looking for an opportunity to be proactive to things like red tide, not reactive.”

The coast from the Whitney Lab up to the San Sebastian River is a prime location to test iCoast, Osborne says. Along that strip of coast are multiple ecosystems from beaches to salt marshes and lands that range from protected to industrial and natural to urban. The variety of environmental settings will provide a textured picture of coastal health and put the technology to the test under a range of conditions.

Issues that affect the coast impact not only the environment but the economy, Osborne says. Protecting the economy means protecting the coast, and protecting the coast requires data. Osborne envisions multiple sensors, some perhaps in 55-gallon drums attached to buoys or piers and others, such as drones or submersibles, remotely directed to locations. Still others, like sondes, are about as long as a pen and are clustered in groups of eight that are about three inches in diameter. They can measure tidal cycles. Another device is solar-powered and barrel-shaped and collects water samples at intervals and stores them until they can be retrieved.

The tsunami of data the sensors will unleash will be funneled through the Whitney Lab’s connection to UF’s high-performance computing platform, HiPerGator, for processing.

About 40 percent of the world’s population lives within 100 kilometers of the coast, so making the iCoast model portable once it has been field-tested is important, Osborne says.

“One of our design criteria is to be able to put this in a car and deliver it anywhere,” Osborne says. “Our vision was a deployable sensory array that could go anywhere in the world.”

Kaplan says the iCoast system could be used to warn of the danger of a cholera outbreak, like the one in Mozambique, or detect contaminated water after a nuclear disaster like Fukushima. In Florida, he says, both human and environmental health are at stake.

“With 1,000 people moving to Florida every day, the need for this project is critical, but it can’t work on its own,” Kaplan says. “It’s like the canary in the coal mine. It’s great until you run out of canaries.

“Our ecosystems are not just about the aesthetics of a beautiful beach. They’re about the water we drink, the crops we produce, and the air we breathe,” Kaplan says. “If we only invest on the tech side, we’ll do a really good job of measuring what we’re degrading.”