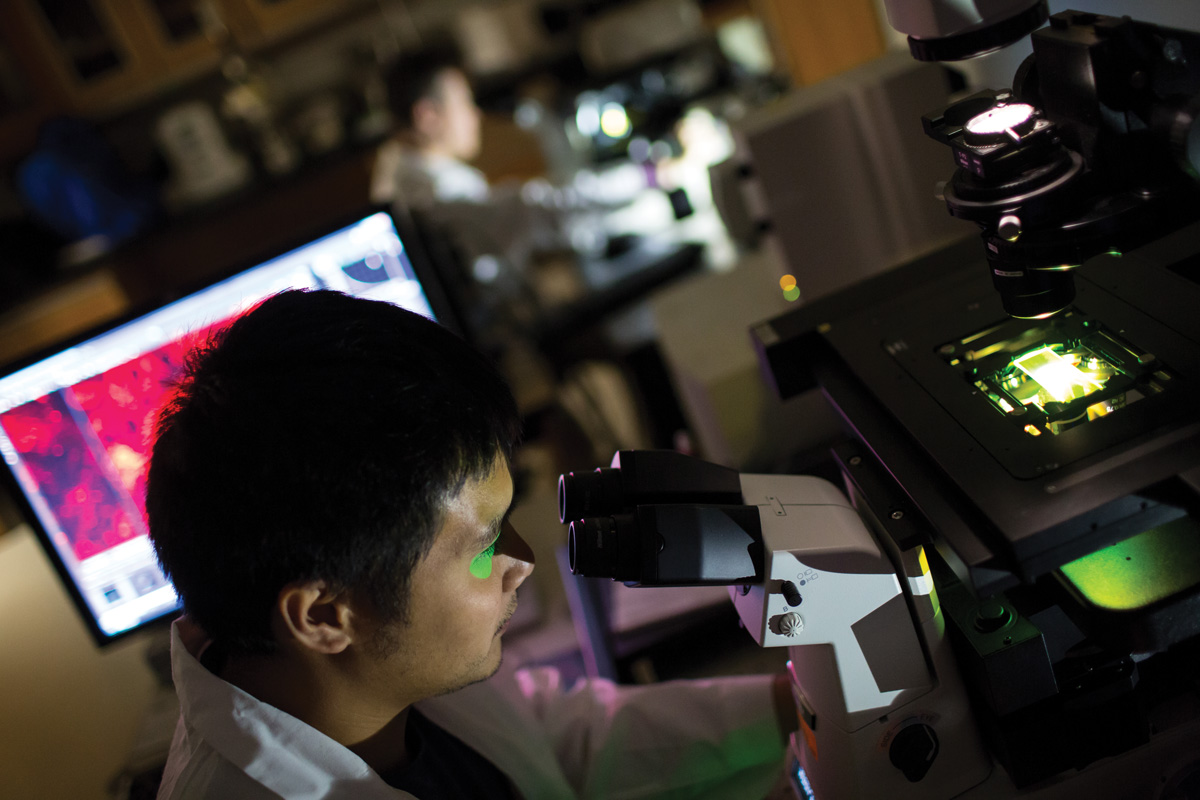 Postdoctoral Associate Cedric Uytingco and fellow researchers in the UF Center for Smell and Taste are working to change the lack of available treatments for anosmia, or impairment of the sense of smell.
Health

Think of the smell of a rain shower. Of freshly baked apple pie. Of a baby.

We may not stop to ponder our sense of smell and how it connects us to experiences and memories. Unless, that is, we have lost it. Or never had it at all.

At the University of Florida Center for Smell and Taste, researchers are working to discover therapeutic treatments for the inability to smell.

In the lab of Jeffrey Martens, researchers have uncovered how to build a sense of smell in mice with congenital anosmia, or lack of sense of smell since birth. They have done this by pioneering an approach to growing cilia that are missing on neurons in the nasal cavity.

Their findings have been met with excitement: The new cilia can detect odors, thereby instilling a sense of smell where there had been none. The team has accomplished this by using gene therapy — artificially engineering a virus to a carry a gene for a mutated or missing one. The virus, injected into the nose, prompts neurons to start making proteins and regrow their cilia.

“We’ve shown we can restore the ability to detect odor,” says Martens, chair of the UF Department of Pharmacology and Therapeutics.

Currently, there is no therapeutic treatment for lack of ability to smell, which afflicts an estimated 6.3 million Americans. Some were born without a sense of smell while others lost it due to causes such as head injury, neurodegenerative disease or inhalation of environmental toxins.

The Martens Lab, which moved to UF three years ago from the University of Michigan, is working to address the lack of available treatments. The lab is striving to develop a gene-therapeutic approach for the first curative therapy for smell loss in humans. Funded by the National Institutes of Health, the lab’s current studies are focused on refining delivery of the virus and understanding which genes can be restored.

The sense of smell significantly contributes to our understanding of our environment. Lack of it can be a safety issue — imagine not being able to smell smoke or spoiled food. Lack of it can also interfere with the desire to eat, as taste perception is greatly driven by the olfactory cue.

What’s more, smell is key in social interactions: between partners, between mom and baby.

“Imagine how many of your social interactions involve food or drink,” says Steven Munger, director of the Center for Smell and Taste, part of the McKnight Brain Institute. “If you lose that, all of a sudden you’re disconnected from others.”

Many of those disconnected by their impaired sense of smell and taste will be gathering in Gainesville on Feb. 25-26 for SmellTaste2017, a first-of-its-kind conference co-hosted by the center and the U.K.-based charity Fifth Sense. The conference will spotlight new research findings, offer workshops and social events to build community, inform about strategies for dealing with smell/taste impairments and help connect patients, clinicians and chemosensory scientists working to advance research.

Duncan Boak, founder of Fifth Sense, lost his sense of smell from a head injury in 2005, when he was 22. His doctor told him nothing could bring it back.

“It was a life-changing experience,” Boak says. “Think about being in a forest, a garden, a museum with old books. Take smell away and the whole experience becomes sterile.”

Over the years, Boak found support was scarce. He launched Fifth Sense with the goal of building a network of patients, researchers and clinicians and raising money for research.

“I realized there was a huge unmet need,” Boak says. “The way things have gone over the past four years, the speed and interest demonstrates that I was right.”

He says Fifth Sense now is approaching 2,500 members, mostly in the UK.

Boak says he drew inspiration from the book “Season to Taste: How I Lost My Sense of Smell and Found My Way,” by Molly Birnbaum, whose dream of becoming a chef suddenly fell apart when she was hit by a car while jogging and lost the ability to smell. She instead became a writer, sharing what she’s learned about the science and psychology of smell. Now executive editor of Cook’s Science at America’s Test Kitchen, Birnbaum will be a featured speaker at the conference.

Monique Selman of Miami plans to attend. The 48-year-old mother of two, who works in real-estate development and construction, was born without a sense of smell.

“We know so little about anosmia,” Selman says. “Is there any chance I could ever get a sense of smell? Is there anything I can do?”

Asked what she would smell first, if given the chance, Selman pauses, a swell of emotion caught in her throat.

“People,” she replies. “My husband and my kids.”