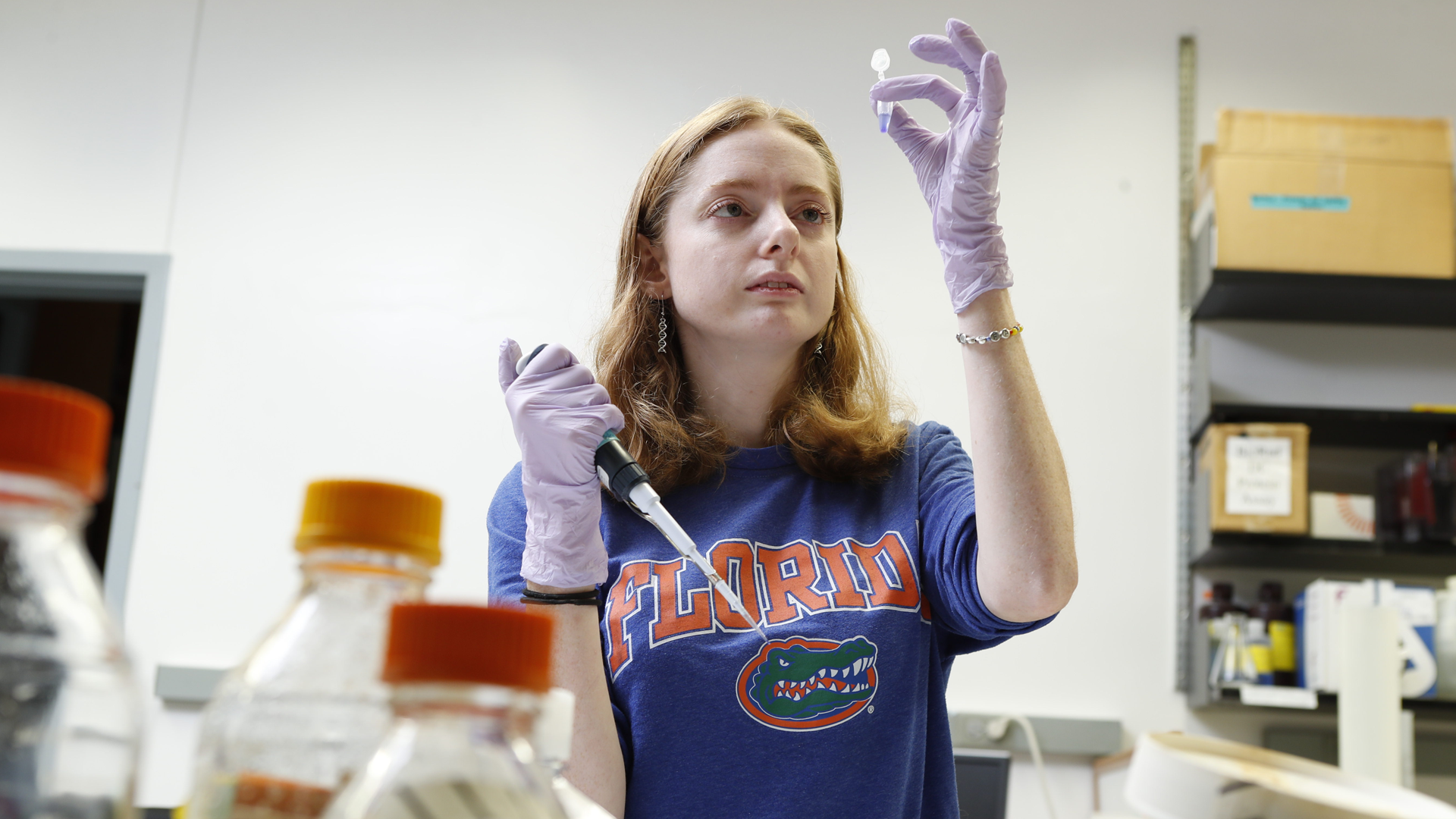 No Time to be Patient

She embarked on a mission to cure her rare disease. Now she’s finding answers for one that’s even rarer.
By Alisson Clark

Shandra Trantham’s research into genetic disease began at age 13, when she snuck a look at her own medical chart.

She’d been having trouble with movement and balance since she was 9. Three years later, her doctors diagnosed her with Friedreich’s ataxia (FA). Knowing it was untreatable, incurable, and likely fatal, her parents didn’t tell her right away. Why burden her with knowing there was no hope? Trantham had been reading about her symptoms, though, and was pretty sure she had figured it out. The glimpse of the chart was confirmation of what she already believed.

What she did not believe was that the disease couldn’t be treated. It was curable. She just hadn’t started working on it yet.

Because FA progressively damages the nervous system, Trantham had no time to waste. After attending a medical magnet high school in her hometown of Jupiter, Florida, she finished her bachelor’s degree in molecular biology from the University of South Florida a year early. Along the way, walking became more difficult. She lost most of the feeling in her legs and required surgery for scoliosis, a common complication of FA, which is caused by a genetic mutation that keeps the body from making the protein frataxin. Without frataxin, cells in the heart, spinal cord and muscles can’t function properly.

As she persisted through her studies, Trantham saw hope in genetics.

“When I was doing molecular biology, I learned that genetics is the root cause of pretty much everything,” she says. “A lot of the promising treatments that are in development for FA are genetic-based therapies, so I really wanted to get more of an understanding of genetics.”

She decided to apply to the genetics and genomics graduate program at the University of Florida. There, she hoped to work alongside Powell Gene Therapy Center Director Dr. Barry Byrne, whom she first met as a patient, in the epicenter of FA science and clinical trials.

“It’s really the combination of understanding the clinical aspect, the molecular aspect and the genetic aspect that’s going to help us develop better treatments,” she says. “I was really excited that UF is approaching FA from all those angles.”

In 2018, Trantham was accepted to UF’s doctoral program and celebrated with orange and blue cupcakes. Then came a curveball: The research had advanced so quickly that by the time she joined Byrne’s lab the following year, the FA research had moved to AavantiBio, the company Byrne founded with fellow UF professor and gene therapy researcher Manuela Corti. While Trantham would still collaborate with the team pushing the cure forward, she wouldn’t be able to center her Ph.D. project on FA.

As a patient, it was good news — Trantham was one step closer to a commercially available treatment. As a researcher, she wasn’t sure where to focus her efforts.

Then two UF grads reached out in need of a miracle.

When David and Stacey Ogman’s 4-year-old son, Jordan, was diagnosed with the neurodegenerative genetic disease TECPR2 in 2019, they heard the same devastating outlook Trantham’s parents had heard: no treatment, no cure. But while FA affects thousands, there are just 27 known patients in the world with TECPR2-associated disease. The Boca Raton couple, both UF alumni, reached out to 100 scientists and researchers, hoping someone would take on the challenge of creating a gene therapy for the fatal disorder.

Byrne and Corti answered the call — and so did Trantham.

“I knew how they felt, because when I was first diagnosed, there weren’t a lot of clinical trials. Now there’s a lot of different approaches in development for FA, but with TECPR2, there’s not a lot of research and there’s no clinical trials,” she says. “I wanted to help them.”

In the lab, Trantham — now in the fourth year of her Ph.D. program — is driven by knowing Jordan’s fate rests in her hands. Because FA impacts her hand coordination, she works with a technician who helps her run experiments, and uses a mobility device called a LifeGlider that supports her body weight so she can move around the lab without her walker. At the bench, she’s developing ways to deliver a healthy copy of the TECPR2 gene by encasing it in a harmless virus called AAV — a technique pioneered at UF in 1983 and first used in models of muscle and heart disease by Byrne.

Once the healthy TECPR2 gene is incorporated into the body, patients will be able to make the TECPR2 protein as if they didn’t have the disease, Trantham explains.

It’s similar to what she’s hoping will happen for her own disease, as AavantiBio moves toward clinical trials. It’s tantalizingly close. The gene therapy in development for FA sits in the freezer in her lab.

Corti understands the frustration of having a cure so close and yet not available. She feels it when she sees patients who could walk when she started researching FA lose their mobility, and wonders if therapies will come in time to bring it back.

“That is what goes on in our mind: Every day that passes, there is some progression of the disease,” Corti says. “But at UF, we have all the components to be successful, from basic to translational science and a great clinical team that has experience with gene therapy. That’s not easy to find.”

With Byrne and Corti’s guidance, Trantham is now testing five potential TECPR2 therapies in mice to see which perform the best. It’s data that could inform research for FA and other genetic diseases by shedding light on ways to target the nervous system and strategies to manage immune response to the therapy.

“When I’m working in the lab, I see the bigger picture: I’m testing the expression of a gene therapy that is going to help people,” she says. “I know what it’s like to be waiting for that treatment.”

She may be one step closer. In 2019, the year after she had to start using a walker, Trantham began a trial of a medication that has kept her symptoms from progressing. She’s hopeful it will gain FDA approval so she can continue taking it until gene therapy is available to reverse the disease. For now, the drug has reduced her fatigue and improved her stability to the point where she can even wear shoes other than her signature high-top Chuck Taylors, previously a must for ankle support.

Once she finishes her doctorate, Trantham envisions working at the intersection of advocacy and science. She’s seen the communication gaps between patients, scientists and the government and feels she’s in a unique position to address them. Her mentors agree.

“Her perspective is invaluable, because she’s been there,” Byrne says. “She really understands the urgency.”