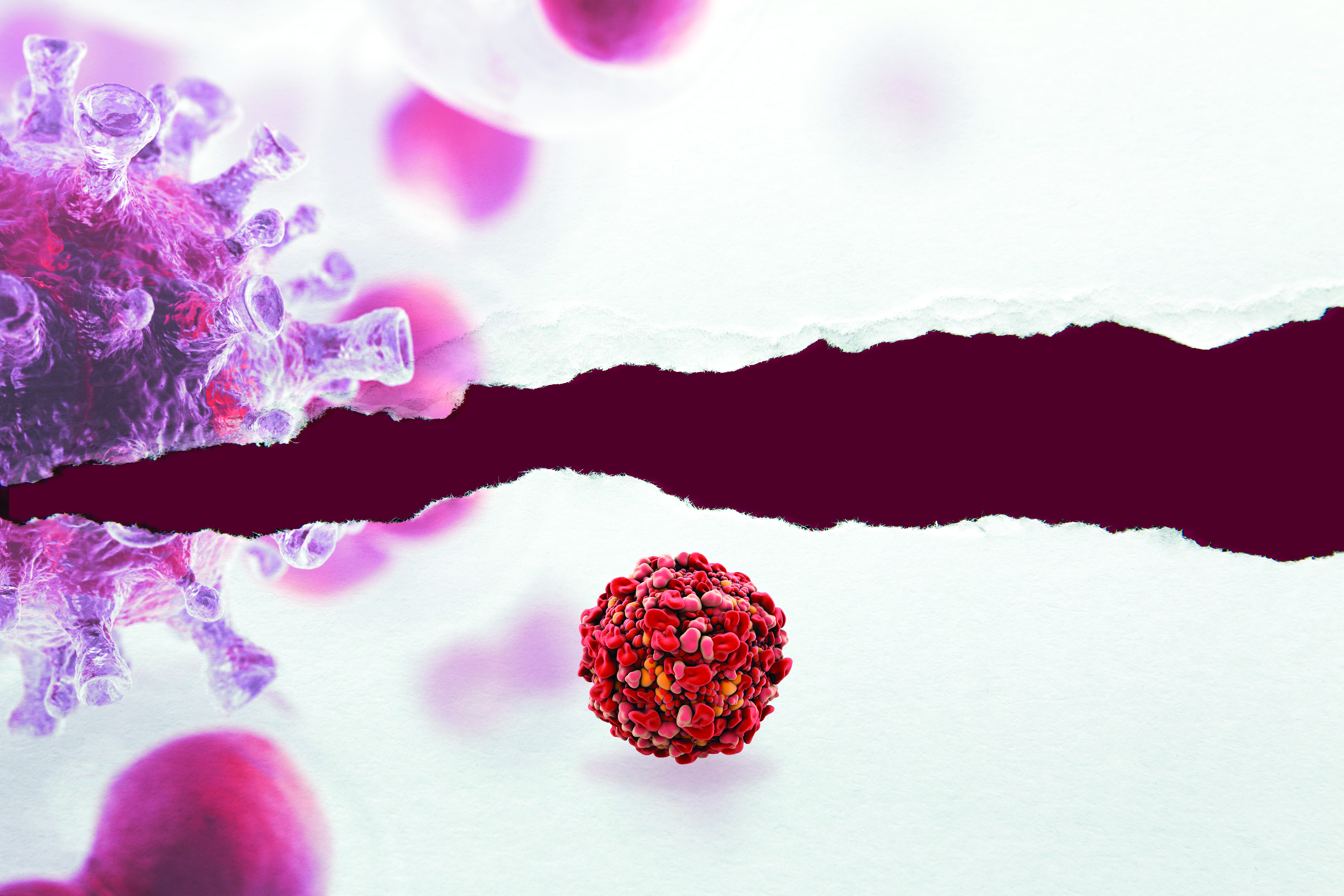 New tools to illuminate the disease
By Cindy Spence

Greg Sawyer got a text as he was walking into a meeting of the University of Florida’s new cancer engineering team, a group of doctors and engineers who collaborate, often side by side, to build tumors so that new cancer therapies can be tested. The text was from a colleague, a doctor, who said he wouldn’t make the meeting. A treatment strategy for a patient had failed and he needed to break the news.

His message: “She really needs this.”

The engineers and doctors understand that urgency. They refer to cancer engineering as a “failure is not an option” project.

The phrase suits a moonshot. Its origin is the Apollo 13 mission. The aerospace engineers at NASA knew they were sending friends into danger and that bringing them home would require a very large team of scientists and engineers to do their jobs exactly right.

In the cancer engineering lab, there is a team, too, building an infrastructure that has never existed before to coax cancer cells into forming 3D tumors that can then be bombarded with therapies. If it works — or when — it could speed up investigations of drug therapies by orders of magnitude. But first, the lab has to be finished, the trays for the cells have to be hand-machined and the painstaking process of growing tumors must be refined. What’s more, there’s not a lot of funding for infrastructure and labs that no one quite understands yet.

“All these words you hear at conferences, that this is an exciting time, advances are being made…” says Sawyer, an engineer and a cancer patient. “This is not fun. It’s not an exciting time. We all just want this to be over.

“Failure is not an option.”

For the moonshot on Cancer Engineering — 3D Tumors for Cancer Research, the team asked for a microscope. At $500,000, it’s not just any microscope, but a high-speed confocal microscope that can yield high-resolution studies of tumors, immune cells and drugs in 3D.

The ability to study tumors in 3D is a key to cancer engineering but required a new tool. That tool emerged from the lab of engineering researcher Tommy Angelini, who had been working on a method to create 3D structures out of cells when he began using a granular microgel, which has properties of both solids and liquids. Sawyer challenged him to print something he thought was impossible — a jellyfish. In traditional 3D printing the wispy tentacles at the base would have crashed under the weight of the head, but the microgel held the jellyfish in place. Angelini’s soft matter printing method was quickly incorporated into the Cancer Engineering Lab.

Cancer cells in 3D are important to research because cancer itself is a 3D system. Studies of cells in petri dishes are 2D, so they fall short of mimicking cancer in the human body. Cells and tumors in mice are 3D, but not all cancers will grow in mice, and growing cancer in mice to test therapies is expensive and time-consuming. By the time a tumor grows in a mouse, and a therapy is tested only to fail, a patient may not have time to wait for the next mouse model.

Growing cells and tumors in microgel allows them to behave much the way they would behave in the human body, expanding naturally. And microgel is permeable, so immune cells and various drugs at various concentrations can be tested, all at the same time. Cancer is different person to person, so ideally, the lab could harvest a patient’s own cancer cells, grow them in the lab and test as many therapies as a doctor wants to test.

That’s where the microscope comes in. When the cancer cells and tumors are bombarded with drugs or immunotherapy, their reaction can be watched through the high-speed confocal microscope. The microscope can image cell and tumor sections roughly the thickness of a human hair, showing in minute detail how the tumor reacts when a therapy — immunotherapeutic T cells for example — are introduced.

Immunotherapy is the specialty of Dr. Duane Mitchell, a specialist in brain tumor therapy.

Mitchell studies glioblastoma, the most common malignant brain tumor in the adult patient population. The majority of patients who are diagnosed with a malignant brain tumor present with stage four disease, or glioblastoma. Standard treatment is aggressive and includes surgery, radiation and chemotherapy. Still, the average survival is about 15 to 18 months after diagnosis.

“Immunotherapy is really an attempt to engage the patient’s own immune system in fighting the advancement of malignant disease,” says Mitchell, the Phyllis Kottler Friedman professor, Department of Neurosurgery, and co-program leader, Cancer Therapeutics & Host Response research program, UF Health Cancer Center. “There are a number of experimental approaches that we and others are pursuing to try to engage the immune system to fight tumors.”

The trick is to get immunotherapy to recognize the cancerous cells as abnormal and attack them but leave the healthy cells around the tumor untouched.

Watching the interactions of activated T cells with cancer cells requires the high-speed, high-resolution imaging of the confocal microscope. With the microscope, the tumor microenvironment is enlarged and the migration of T cells toward cancer cells can be watched, then the invasion of cancer cells by T cells, and then the T cells killing cancer cells. By using time-lapse studies, the researchers hope to identify the critical steps and cellular activity at every step in this process.

In a subset of patients who received immunotherapy combined with standard therapies, such as chemotherapy and radiation, there has been some success.

In a phase one clinical trial, a New York woman treated with an immunotherapy vaccine has had no evidence of recurrence in 16 years, Mitchell says. Others in that cohort, about 30-40 percent of those treated, are five years post-treatment with no recurrence. Phase two of that clinical trial, funded by the National Cancer Institute, is being led by UF in collaboration with Duke University. The trial has a target of treating 120 patients with glioblastoma and has enrolled over 40 patients so far.

“Getting this to work effectively in all patients is a challenge,” Mitchell says.

The process of getting T cells to recognize, invade and attack a tumor has several signals along the pathway, and in instances where immunotherapy does not work, it turns out that cancer cells are blocking the signals and the immunity cycle is not complete. So, watching T cells at work can show where T cells are blocked.

“One of the big efforts in our work is to try to understand why some patients have remarkable, durable responses and others do not,” Mitchell says.

Discovering why some patients are responders and others are not will require 3D tumor assays that can be studied and perhaps manipulated. Using the new microscope, the lab can perform time-lapse studies, which could reveal the mechanisms of immunotherapy.

The brand-new lab emerging on the ground floor of a mechanical engineering building is a hybrid of a medical lab and an engineering lab, doctors and engineers alike in white coats in a clean environment. The new microscope is up and running.

Lab director Padraic Levings, on loan from the Department of Orthopaedics and Rehabilitation, says working with engineers has been interesting. He points to a table made of stone, a stable surface to reduce vibration. He mentioned in an offhand way to one of the engineers his need for such a table, and when he came in the next day, there it was.

That can-do spirit permeates the cancer engineering lab, where the team finds it unfathomable that the mortality rate for many cancers has remained largely unchanged for the past 50 years. Putting cancer through the paces engineers use to solve problems could yield new therapies, once they fine-tune the infrastructure for marrying mechanics and biology.

The engineers want people to understand what’s possible when engineering and medicine collaborate. And they’re hoping to recruit other engineers and doctors to help.

“We don’t want to be alone. We have a different lab. Nobody else has this lab, and that’s not making me happy,” Sawyer says. “I don’t want to be the only cancer engineering lab. I want one at every university.”