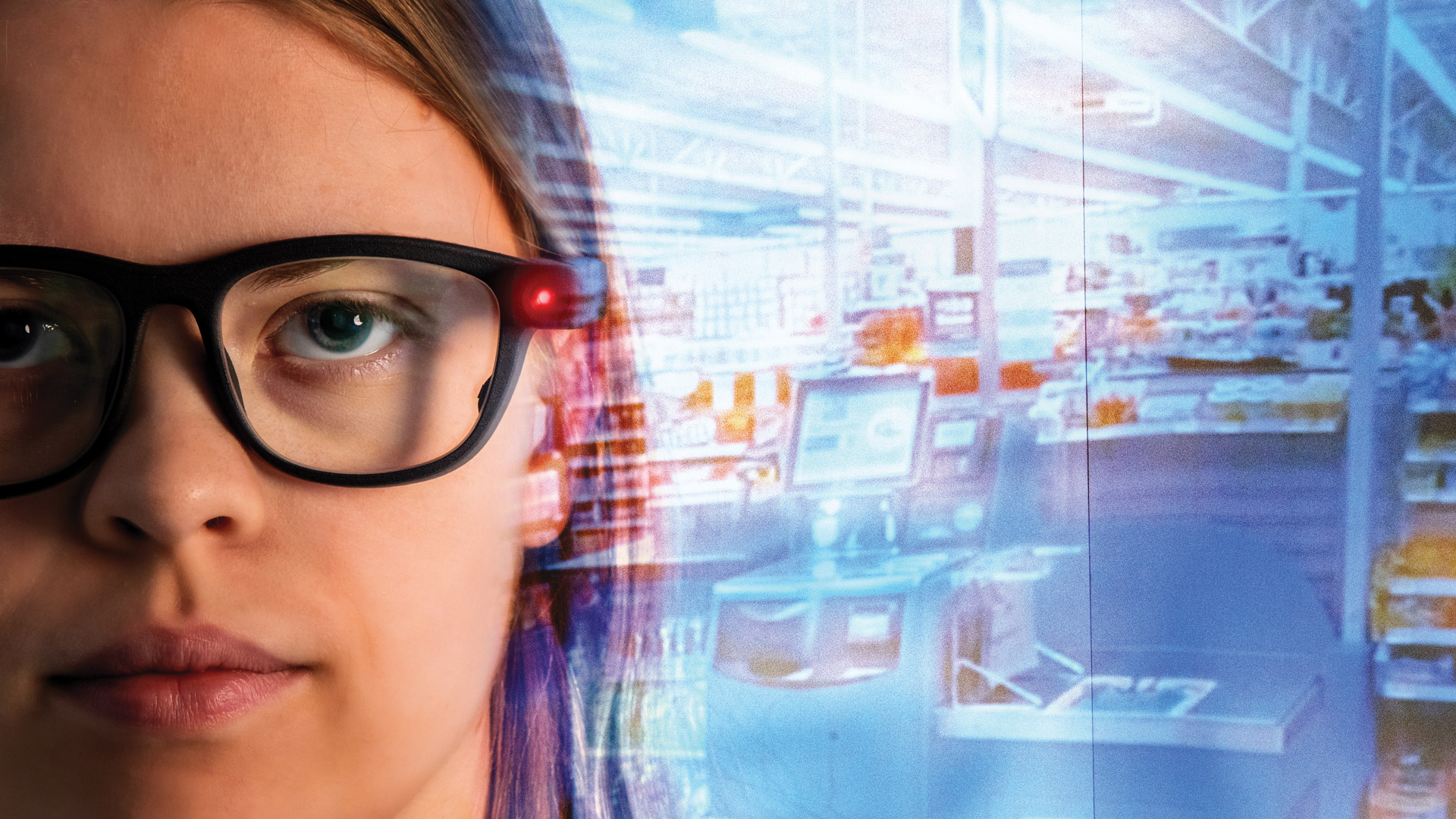 As retail crime evolves, this team stays one step ahead

Head up to the second floor of the University of Florida’s Innovation Hub and you might find yourself in the checkout area of a big box store, the aisles of a Home Depot, or a shopping center parking lot. In a 360-degree immersive simulation lab, floor-to-ceiling projections recreate retail environments that allow research scientist Read Hayes and his collaborators to test new security interventions before they appear at a store near you. While the lab gets enthusiastic reactions from visitors in retail and law enforcement, its most important audience is criminals.

The simulation area, one of five labs in the Hub dedicated to retail security, is part of Hayes’ decades-long journey to understand what drives retail crime. It’s one of many ways UF researchers blend technology with social science to improve retail security and deter theft, fraud and violence.

Retail theft leads to losses of around $60 billion per year, according to the National Retail Federation: costs that are passed on to customers. The tactics keep evolving, with online resale proliferating, curbside pickup crime emerging and smash-and-grab attacks making headlines. For Hayes and his colleagues across campus and in industry, staying one step ahead of criminals means learning to think like them.

A Medical Model for Fighting Crime

Growing up, car rides with his dad gave Hayes a crash course in the scientific method. The elder Hayes, a family doctor, used drive time to listen to tapes about the latest medical breakthroughs. (“Gross stuff, worms and sores,” Hayes recalls.) A reverence for research stuck with him as he earned criminology degrees from UF and the University of Leicester, and working undercover gave him an anecdotal understanding of the criminal mind. But as he climbed the ranks of the loss prevention industry, Hayes wanted data.

“Everyone would look at what the big guys did and benchmark on that, but even the big guys were making decisions based on hunches,” he says.

Input from offenders informed some decisions, but the easiest criminals to interview were “the dumb and unlucky,” i.e. those who got caught. If retailers really wanted to discourage criminals, they needed to hear from the good ones. Hayes turned to snowball sampling, asking the initial round of shoplifters he interviewed to refer him to others who could help inform his research. Through offender interviews, Hayes and his team glean insider knowledge about how shoplifters prefer to steal, from switching price tags to hacking gift cards and shopping at “soccer mom o’clock” — the time of day when stores may be too busy to effectively prevent theft. Over years, he developed a network that could power the randomized controlled trials needed to help retailers make evidence-based decisions.

How to Stop a Shoplifter

Skepticism about the limitations of this kind of science pervaded the industry, however. That changed in 2000, when Target’s vice president of asset protection publicly backed Hayes and funded his research. That work led to the creation of the Loss Prevention Research Council, an industry group Hayes directs consisting of over 160 members, including 70 retailers from Walmart to Louis Vuitton. Launched from a back room of the Gainesville Sears, it moved to a midtown space and then to the Innovation Hub.

Hayes and his team have completed more than 300 studies and organize an annual conference to share research results. In their published papers, they’ve tested the efficacy of alarm tags to prevent theft of cordless drills (effective), weight-loss supplements and skin care products (not effective) and compared the utility of theft-proof shelves against monitors that broadcast thieves’ activity. (The display cut loss by 21%, while the monitor didn’t have much impact.)

In the simulation lab, researchers use gaze-tracking glasses to see where offenders are looking and galvanic skin response sensors to tell what they’re feeling. Thieves can point out what they perceive as a camera’s likely blind spots and which types of deterrents they’re most likely to notice and fear. The LPRC space also includes an ideation lab, a rapid prototyping space and a mock store for hands-on testing. After 30 randomized controlled trials — more, he says, than any other group — Hayes has turned many initial skeptics into believers.

“People in the industry had to understand the role science plays,” he says. “Science is not a joke and it’s not a deity. It’s a process.”

When 80 people launched a coordinated attack on a Nordstrom department store near San Francisco in November, calls to police began before the smash-and-grab did. Witnesses outside the store reported reckless driving as the offenders’ cars convened, blocking off access to the scene. In a parking lot in midtown Gainesville, high-tech towers are paving the way for artificial intelligence to flag those early indicators, which could notify nearby store managers to take steps to protect customers, staff and merchandise.

The towers — three already in place and two more to come — combine thermal sensors, gunshot detectors, 3-D laser scanning and cameras, driving the next generation of crime prevention. If the tower detects a gunshot, for example, an AI model could activate a camera to pan, tilt and zoom around the scene, assessing the situation and alerting law enforcement. They’re part of UF’s SaferPlaces Lab, four contiguous mini-blocks surrounding the Innovation Hub, and a core component of Safecord, an interdisciplinary effort linking city officials and law enforcement with UF researchers.

Leveraging a National Science Foundation planning grant, the research aims to inform smart streetscapes that reduce crime in retail environments and beyond. The vision, says Safecord principal investigator and electrical and computer engineering Professor José Fortes of UF’s Herbert Wertheim College of Engineering, is to develop technology for sensing and processing real-time information that identifies safety issues and how to address them.

For example, how do warm- or cool-toned lights affect perceptions of safety? What brightness makes the area feel well lit? The lab makes it possible for UF and the city to investigate these questions in a real-world environment, he explains.

“These are situations you can’t recreate in a controlled experiment. We’re trying to change perceptions for customers as well as for people who do bad things. When we can do that through the built environment, quality of life is improved,” Fortes says. “The SaferPlaces Lab provides unparalleled capability for this research.”

Along with computer engineering Professor Renato Figueiredo and Hayes, who is also housed in engineering, Fortes’ collaborators include College of Design, Construction and Planning Professors Ryan Sharston and Yan Wang.

As an urban planning professor and civil engineer studying built-environment resilience, Wang looks at the human dimensions of smart cities. She wants to know how data from sensors like those in the SaferPlaces Lab can integrate with information gleaned from social media or reported by members of the community, and what types of monitoring make people feel safe without raising privacy concerns. Taken together, these advances have the potential to improve quality of life, inspire the infrastructure of future cities and guide real-time disaster response.

“Safety issues need to be addressed by so many disciplines,” she says. “It’s a great opportunity for interdisciplinary research.”

Part of the SaferPlaces Lab emulates one of the fastest-growing areas for retail theft: curbside pickup. The pandemic sparked an avalanche of what’s known in the industry as BOPIS — buy online, pick-up in store — which can require lone workers to venture out into a minimally secured parking lot, sometimes late at night, to deliver expensive merchandise. If workers and customers don’t feel safe, retailers risk losing both. Smart towers could protect curbside transactions as well as passersby, alerting them with a chirping noise or making the streetlights brighter if someone is hiding nearby.

Hayes is quick to add that AI-powered surveillance methods like these shouldn’t be seen as evidence gathering devices, but as early-detection tools.

“With these models, you’re identifying the behavior, not the person,” he says. “All AI does is give you a heads up.”

You’re at the self-checkout, trying to scan an onion. Using behavioral cues, the checkout kiosk may soon be able to determine if you’re actually struggling with the technology or trying to confuse the scanner by bagging a pricey item after scanning something cheaper.

Retail security hinges on a balance between thwarting would-be criminals, referred to in the industry as red guests, and serving law-abiding green guests. Interventions need to keep green visitors safe while annoying them as little as possible.

Tried buying cartridges for refillable razors lately? If so, you’ve probably encountered a theft-deterring display that may have been field-tested by Hayes’ group. At the request of major retailers, they’ve hosted “bake-offs” where shoplifters come to the lab to test competing anti-theft technologies. The one rated most challenging when trying to steal the product gets installed in stores. (In addition to razor cartridges, laundry detergent, tooth whiteners, baby formula and heartburn medication are favorite targets.) Shoplifters gravitate toward items like these because they’re easy to carry and hide, available in a wide variety of stores, expensive to purchase and simple to sell, Hayes explains.

Online marketplaces make reselling stolen merchandise easier than ever, so much so that the CEOs of 20 retailers wrote to Congress last year asking them to support a bill that would boost transparency in such purchases.

Deterring crime might require buyers and sellers to jump through extra hoops, which can be frustrating — but likely not as frustrating as finding a shelf emptied by shoplifters. Some innovations, however, can help green guests. Cameras that deter thieves can be taught to detect spills a guest could slip on, or spot unhappy faces that signal a shopper needs help. And closer tracking of inventory through RFID tags not only thwarts stealing, but ensures customers can find an item the store says is in stock by pinpointing its location in the aisles.

“It’s about getting people with bad intentions to do a U-turn,” Hayes says.

What works for a lone shoplifter, however, might not work for a coordinated group. The smash-and-grab attacks that proliferated at the end of 2021 represent a tiny portion of retail crime, but sparked concern for retailers, who know workers and customers don’t want to be where they don’t feel safe. In the National Retail Federation’s 2021 retail security survey, 69% of stores noted an increase in organized crime, and 65% reported an increase in violence.

Was this a pandemic aberration or a growing trend? Can social media chatter give an early indicator that the next attack is imminent? What will offenders try next? For Hayes — a social scientist in an engineering school — the answers are inherently interdisciplinary.

“Retail crime can be very dangerous and violent,” Hayes says, “but even when it’s not, it affects everyone.”