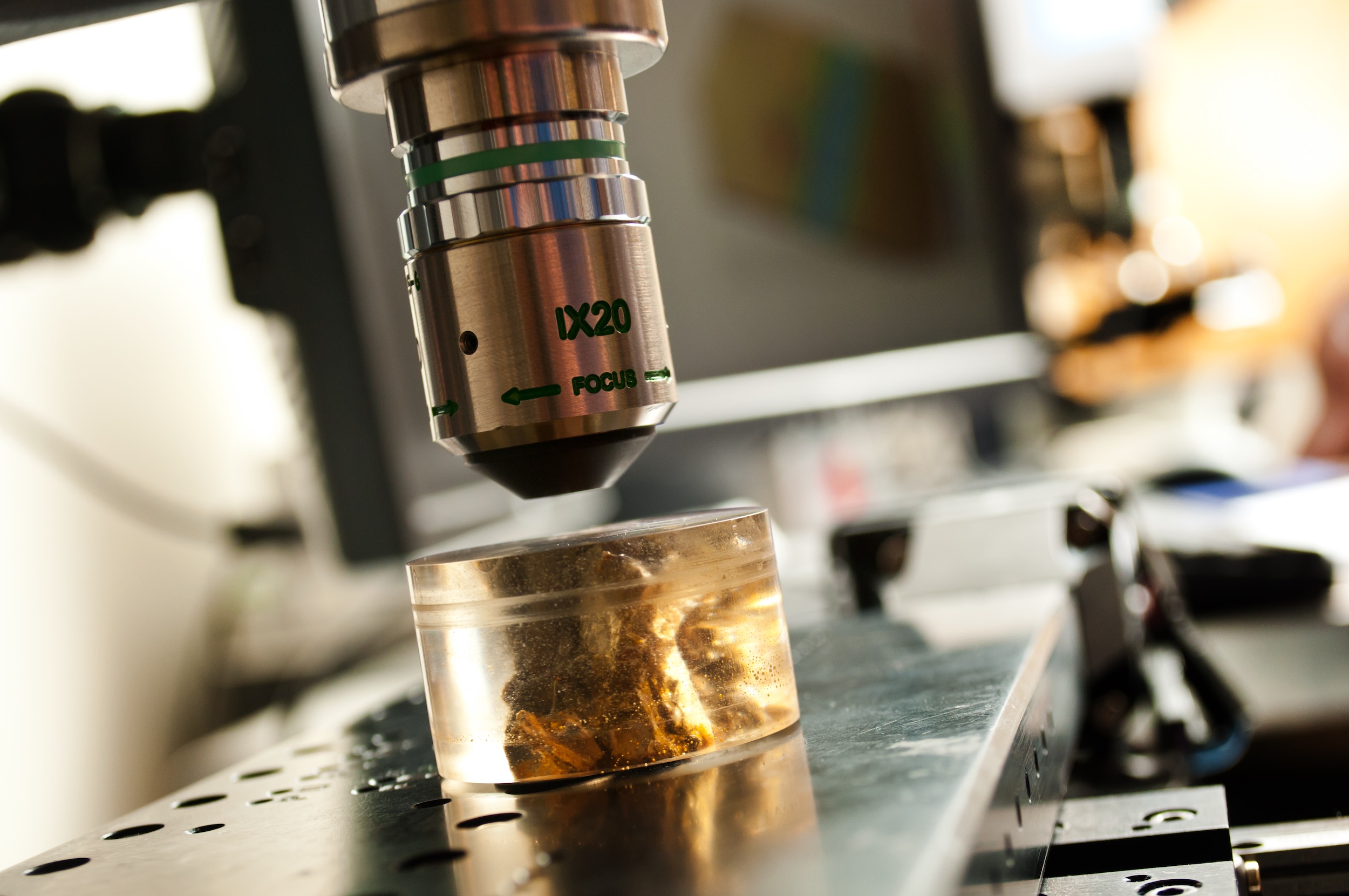 W. Gregory Sawyer often finds himself at intersections. As a tribologist, he crosses paths with road builders and biomedical engineers, chemists and physicists. They all want him to solve a problem for them. They could build a better road or a better hip implant, come up with a better lever or a better gear, but they need to enhance friction or reduce it. They need to figure out how to get one surface to interact perfectly with another.

And surfaces, Sawyer says, paraphrasing a long-ago physicist, are the work of the devil.

“At some level, it’s all about what happens when things touch,” says Sawyer, the University of Florida Ebaugh Professor of Mechanical Engineering. “We define our world through the surfaces.

“And everything is hard at the surface.”

Tribology — the study of friction, wear, lubricants and interacting surfaces — is not mainstream as sciences go. Daily life, however, is full of it. Our brand-new tires hold the road, our worn, balding tires don’t. Gears turn our bicycle chains and transmissions — the world even — but grind to a halt without lubricants. Household tribology problems might simply require a spritz of WD-40, but in the laboratory, the issues can be maddeningly intractable.

As a young researcher, before earning his Ph.D. at Rensselaer Polytechnic Institute in 1999, Sawyer discovered the complexity of tribology while working in NASA’s Jet Propulsion Laboratory on the Mars rover. The lab was a technological wonderland, with any gadget or gizmo a scientist could dream of. He could use any tool, perform any test.

“I remember I walked out of there in 1992 and thought, ‘Anybody who can solve those problems, they can build anything,’” Sawyer says.

Since 1999, Sawyer has built a world-class tribology program at UF, much of it from scratch. A tour of the laboratories winds through the Mechanical and Aerospace Engineering building, where postdoctoral researcher Brandon Krick points out dozens of industrial-looking machines, most built by students. In fact, Sawyer said, his labs are run mostly by 22- and 23-year-olds, some of whom have landed there by accident. Undergraduates get only a few hours of instruction on tribology, Sawyer says, so most don’t discover the field until graduate school.

Krick, with an interest in space technology, built experimental tribometers, compact and rugged and designed to survive the space environment: thermal extremes, destructive radiation and micrometeoroids. The devices were tested on the International Space Station to see how solid lubricants and coatings perform in a low-friction, low-wear environment.

The blinking of an eyelid is an almost ideal tribology problem. A person blinks 10,000 to 20,000 times per day, the cells of the cornea and eyelid sliding by each other, Dunn says.

“If I took a piece of chalk and rubbed it back and forth 10,000 times on a chalkboard it would wear away pretty quickly, but your eye can sustain these cycles thousands of times per day over an entire lifetime,” says Dunn, who has been working with Sawyer for eight years, starting as an undergrad just looking for lab experience. “We wanted to investigate these inherent low-friction, low-wear qualities.”

Tribology was a science without a name, however, until the 1960s, when the term appeared in the Oxford English Dictionary after it was coined by British civil engineering Professor Peter Jost. The term is rooted in the Greek “tribos,” for rubbing.

Jost had been attending an iron and steel conference, viewing slides of decrepit machinery and listening to plant managers bemoan equipment failures when he realized the real failure was lack of knowledge of the science of how surfaces in motion interact. In many countries, experts estimate that friction and wear cause waste that equates to 5 percent of the gross national product.

Its industrial roots give tribology an image problem, Sawyer says. In every post-apocalyptic movie is a dark scene all-too familiar to tribologists: heavy machinery, the landscape all around covered in oil, dripping in grease. “It’s gross,” Sawyer says.

If there is grease in Sawyer’s labs, however, it is in a closet. The environment here is post-industrial, futuristic even.

Among the many ongoing projects is a bearing for a clean energy technology called a current plane, an underwater turbine. The current plane harvests energy from the Gulf Stream, which turns the blades as it flows. The design is deceptively simple, elegant even, but the mechanics are a challenge, and that got Sawyer excited.

“We have to get these blades to spin forever, really slowly, with no maintenance,” Sawyer says. “There are more challenges for bearings undersea.”

Alex Fleming, vice president of engineering for Ecomerit Technologies, which developed the Aquantis current plane, says the design was pretty straightforward for a company that pioneered wind turbines. But blades turning in air differ from blades tethered to the ocean floor, in a deep, pressurized, saltwater environment 800 times as dense as air. Typical lubricants cannot be used; even if the gears were more accessible the lubricants could contaminate the sea. Fleming said it was clear they needed a tribologist.

“Dr. Sawyer has some rarefied skills in bearings and seals, and we needed to draw on those skills in the undersea environment,” Fleming says. “Aquantis is steeped in certain engineering challenges and requires best-in-class engineering.”

The promise of the project, funded by the U.S. Department of Energy, captured Sawyer’s imagination.

“What if we could power Miami, without pollution, with just the current going by offshore?” Sawyer asks. “This is really cool, really smart.”Postdoctoral researcher Brandon Krick has designed tribometers tested on the International Space Station, but also worked with Sawyer to investigate the mechanical properties of 65-million-year-old fossilized hadrosaur teeth.

The undersea environment is much like the environment in space: both require mechanical devices to work with coatings or lubricants that do not require routine maintenance, or the mechanics simply become too expensive to operate. Lubricating two rolling or sliding surfaces, in extreme temperatures, pressures, and in saltwater or in space, is tricky. And what about a biological environment?

“For undersea propellers … we need a material that lasts forever and slides with low friction in salt water,” Sawyer says. “We need a hip joint. A hip joint slides at a relatively low speed in a physiological saline solution. It might not seem like a connection but it’s the same thing.”

The connections between the mechanical and biological world are natural to Sawyer. In his lab, flower petals end up in tribometers, and why not? The surfaces of flower petals are engineered to hold pollinators, to both collect water and repel it. They feel smooth, but under a microscope, their surfaces are rough. What natural properties offer lessons for the mechanical world?

Department Chair David Hahn says tribology is growing in importance, biotribology in particular, and having a recognized tribologist on the faculty has opened up new opportunities. And Sawyer is as gifted at teaching as he is at research, Hahn adds.

Sawyer’s “what if we try this” approach is engaging to his students. Dunn recalls years ago a contact lens company asking if the lab could measure the friction of a contact lens, and Sawyer’s response: “Sure, we can try.” Today, contact lens manufacturers are a major source of research funding.

Some discoveries lead to products. Sawyer, a distinguished teaching scholar and UF Research Foundation Professor, has 16 patents or patents pending and has more than 100 journals articles to his name.

But if you find him in the lab on a Sunday, he is likely satisfying his own curiosity. On a cabinet in his office is a wooden structure that looks anything but high tech. Yet, it is a tribometer, a model of Leonardo da Vinci’s first experiments with friction, which Sawyer built with a student from sketches in da Vinci’s notebooks, repeating da Vinci’s measurements precisely. The device took a year to build because it was “our spare-time project, not funded,” Sawyer says.

“I just wanted to see what he saw in his lab. He explored friction, he tested it,” Sawyer says.

“[Isaac] Newton worked on it, da Vinci worked on it. You just can’t help but take a shot at it.

“If we could understand the atomistic origins of friction, it would change the world, truly,” Sawyer says.

When surfaces rub against each other, the atoms of each surface interact. Exactly how energy is transferred or lost as surfaces slide or roll by each other is not well understood. Friction comes in three, or more, varieties depending on how it is defined. Wear and lubrication are not simple, either, and then there are external factors. Predicting the wear of a knee replacement, for example, varies depending on whether the patient is a runner or a couch potato, whether he weighs 100 pounds or 200.

“When you start looking at the science, you realize it’s awful. It’s got physics, it’s got chemistry, now we’re doing a lot with biology. It’s got all the sciences, all the engineering, all the heat transfer,” Sawyer says. “Everything is hard at the surface.”

The complexity makes tribology a kind of quest, a holy grail of sorts. Tribology keeps the world moving. It is daunting and attractive at the same time, Sawyer says: “A beautiful science to the fearless.”

Of Fossils and Tribometers

Tribology, quite literally, is rocket science. Aerospace scientists, mechanical engineers, materials researchers — all turn to tribology to solve friction and wear problems with the future in mind.

So when a paleontologist comes calling, it makes a tribologist curious.

University of Florida tribology researcher W. Gregory Sawyer got a call from Florida State University paleobiologist Gregory Erickson with a question 65 million years in the making: Could fossilized hadrosaur teeth be tested with modern tribology tools?

Engineers don’t often see the interesting paleontological questions, Sawyer said, but he and postdoctoral researcher Brandon Krick were game. One look at the surface of the dinosaur teeth piqued his interest. The pattern of wear made him think – as Erickson hypothesized – that hadrosaur teeth were more complex than previously thought.

Using tribometers and nanoindenters, the tribologists performed a battery of tests, and discovered six layers of dental material, not two, as previously thought.

“Modern tools told us there were different materials in there,” Sawyer said.

Erickson said the work could not have been accomplished without Sawyer’s lab, “arguably the best tribological lab in the world,” and said he is excited about the possibilities for new avenues of research. There are drawers full of fossils in collections around the world that may have more information to yield with tribological testing.

The collaborative nature of the Florida university system was a key to getting the work done, Sawyer said, as was the funding his research gets as a UF Research Foundation Professor. The benefit of having a dynamic experimental lab is that you can ask questions that seem outrageous, he said.

“Why on earth did you ever put a fossil in a tribometer?” Sawyer says he has been asked. “We wanted to see what would happen.

“It took us five years to do this because it was always a side project and wasn’t [specifically] funded,” Sawyer said. “This is exactly what you hope for when you endow research, that people will take those funds and do things that are scientifically significant.”