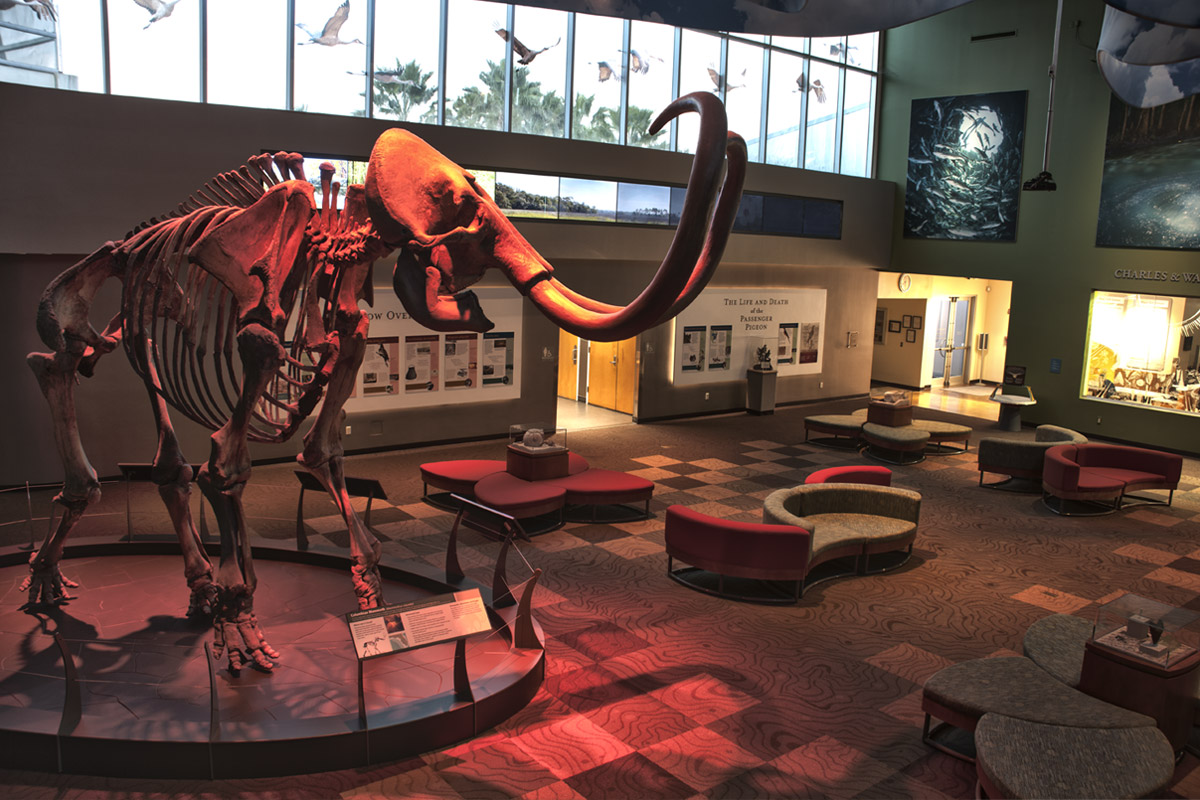 On its 100th anniversary, Florida Museum of Natural History researchers are applying new technologies to old specimens
By Cindy Spence

Florida Museum Director Doug Jones draws endless inspiration from objects in the collection. As a paleontologist, he is particularly drawn to fossils like the Heliaster sea star.

Unlike an ordinary starfish with five arms, the Heliaster had 30 in a sunburst arrangement that gives it the common name, sun star. The fossil is about 2.5 million years old and is the first appearance of this family of sea stars in the fossil record. Even more intriguing, this one was found in Florida where they are extinct; its ancestors only found today in the eastern Pacific. Its discovery was a fluke because fragile sea stars usually decay before they become fossils. In this slab, several were caught together at the moment of death.

“They all died in a mass mortality, stacked on top of one another, during some crisis in the past when conditions were not favorable any longer,” says Jones, director of the museum since 1997. “They’re so different from anything that lives here today. I marvel at their beauty and the story they tell about past connections on Earth.”

Jones knows the sea star is only one story: There are 40 million objects in the museum’s collections, each with a powerful story to tell about life on Earth.

“These objects are a library of life,” says Jones of the collections in the museum, one of the top three university-based natural history museums in the nation. “If we can tell the stories of the animals and plants that inhabit the Earth, we can inspire people to want to learn and enjoy the secrets of life.”

Some of the objects are rare, or very old, or they vouch for a plant’s or animal’s existence in a certain place in a certain time, and the museum has protected them throughout its 100-year history. In recent years, their power has grown as scientists use new technologies to interrogate the objects, getting them to reveal new information. And that information can now be shared with scientists worldwide.

Jones says the 19th century stereotype of a museum scientist as someone who puts a name on something, puts it under glass and walks away, is changing. UF is the lead on the National Science Foundation’s Integrated Digitized Biocollections project — or iDigBio — a collaborative effort by 283 institutions in all 50 states to digitize information from museum collections and put the information online so scientists worldwide can use it. Other technologies allow scientists to see inside specimens without destroying them, or use fragments of genetic material to assemble evolutionary relationships or process data with powerful computing.

“We are at a new frontier of questions we’re going to be able to answer that were really unanswerable just years ago,” Jones says.

At a time when some natural history museums are in a holding pattern or even closing, the Florida Museum is one of the nation’s largest and fastest-growing museums, according to the Official Museum Directory. Jones says UF has absorbed collections from the University of Miami and the Florida Geological Survey, and even the collection of retiring paleontologist Emily Vokes of Tulane University.

Vokes and her husband, Harold, spent four decades collecting fossil mollusks from New Jersey to Argentina and around the Gulf Coast. As her retirement approached she began to worry about the Lane cabinets lining the hallways, up one side and down the other, outside her Tulane office. Lane cabinets — the size of a small freezer — hold scientific specimens. The cabinets are outfitted with shallow drawers, and for small specimens, one drawer can hold thousands of specimens.

“I realized all of this, literally my life’s work, was going in the dump the minute I was out the door,” Vokes says from her home in New Orleans. Her department’s research priorities had shifted, and the university wanted the space more than it wanted the mollusks. But a huge chunk of Vokes’ collection fit nicely with UF’s (the other portion found a home at the Paleontological Research Institution).

“Bless y’all,” Vokes says. “What you have is a resource beyond belief.”

Jones says he arrived at UF when many curators and collection managers were retiring, but it was clear to him that the old guard had made decisions as young scientists that charted a vigorous course for the museum’s collections, even without knowing how technological advances would increase their value.

In the museum’s first annual report, the founding director, Thompson Van Hyning — hired from Iowa and blown away by Florida’s biodiversity — suggested the state museum could be one of the “greatest museums the world has known.” Florida’s rapidly disappearing biodiversity may have been a catalyst for collecting, too.

“It’s a sad story, but the rapid population growth, the destruction of the natural environment, the disappearance of species, likely helped our forefathers recognize we’d better hold on to these specimens; that they were going extinct at an alarming rate, and these may be the only specimens we ever have to remember what lived here,” Jones says.

Museum collections were center stage in the historic 1972 ban on DDT, a chemical that caused human and environmental harm. To determine whether DDT might be a culprit in thinning shells of bird eggs, scientists turned to UF’s well-known egg collection to measure changes in eggshells over time.

“The eggs from 100 years before, the eggs from 50 years before were important,” Jones says. “We knew how thick the shells were supposed to be because we had those eggs, and could demonstrate that the eggs post-DDT were thinner and less viable.”

Like Van Hyning, Jones cannot predict how the science of the future may draw on the collections.

“We don’t know what the technology of the future is going to be, we don’t know what new information can come from these specimens,” Jones says. “Protecting them is kind of a sacred responsibility.”

Jones says the objects connect people to the planet, to life in the past, present and future.

“If you and I have a conversation about biodiversity, we might have a meeting of the minds or a difference of opinion, but it will be a pleasant, informed conversation,” Jones says. “But if I bring in an ivory-billed woodpecker that’s gone extinct, or the skull of a saber cat, that conversation changes.

“This saber cat lived here in Florida, that’s the skull of a once-living animal that inhabited Florida when Florida was very different,” Jones says. “You can imagine that Florida.

“Extinction isn’t just a word, it’s here, in this object.”