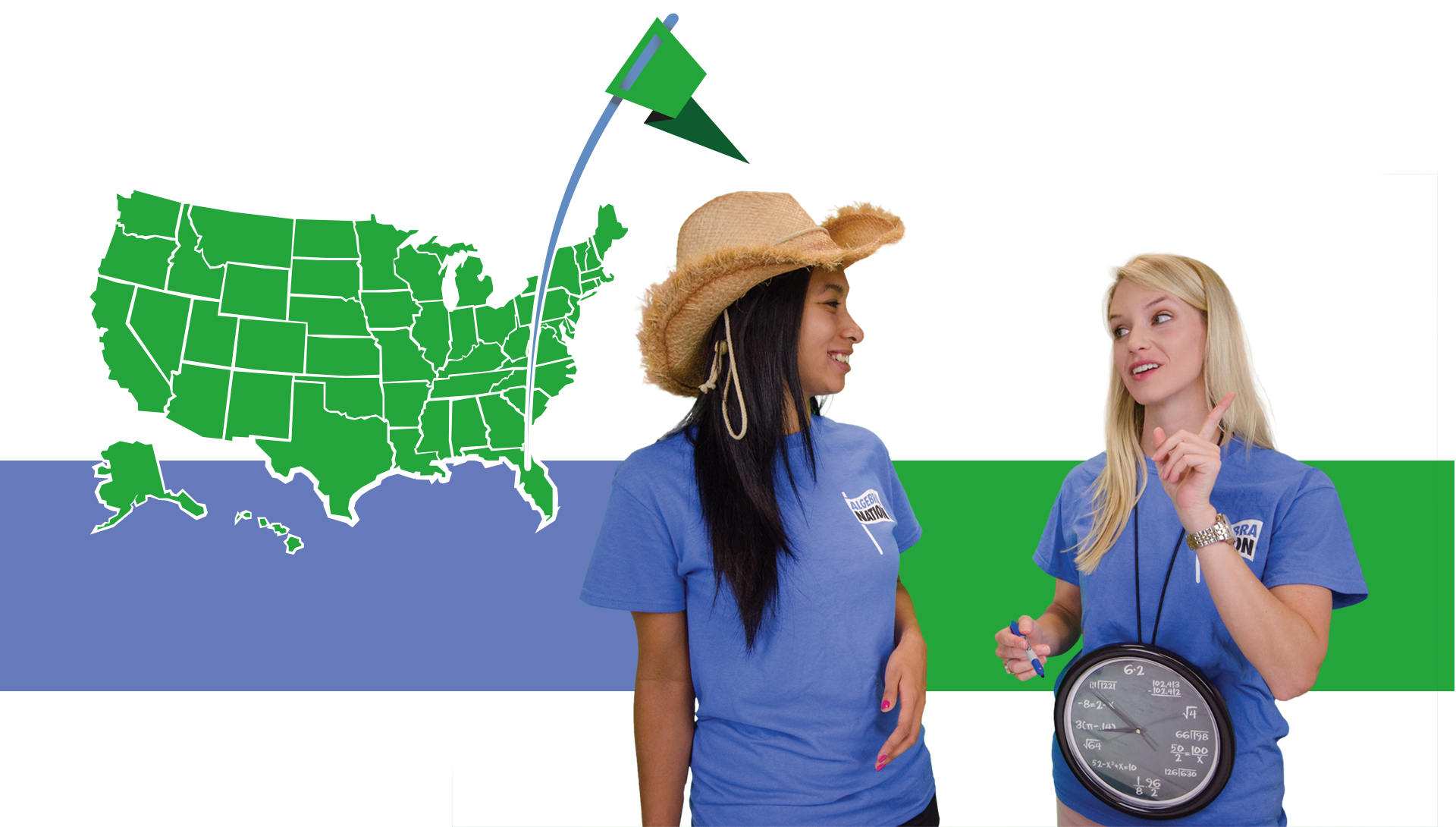 Amy Adams knew a state-mandated algebra exam that debuted in 2012 was going to be a challenge for her ninth-grade students, but when 60 percent of them failed she was blindsided.

“I was very upset,” says Adams, who taught at tiny Central School in Santa Rosa County. “I saw students who put a great deal of effort and energy into being successful and, after all of that, had to look at a piece of paper and see failure. It became my mission to do whatever I could to help students see success.”

As he traveled the state talking to teachers that year, Don Pemberton, director of the University of Florida’s Lastinger Center for Learning, heard the same disconcerting message about the Algebra 1 End-of-Course exam. Far too many students failed and faced the unnerving (and school-clogging) prospect of having to retake it until they passed, or not graduate high school.

The statistics alarmed Pemberton, a national leader in the teacher-quality movement. More than half of Florida’s ninth-graders flunked the 2012 exam. In many high-poverty schools failure rates surpassed 80 percent.

“I thought about the students whose futures hinged on getting through algebra,” Pemberton recalls. “I thought about those who must master this gateway subject to achieve their dreams of becoming physicians, programmers and other professions. I vowed right then to harness UF’s expertise to develop a way to help them.”

Returning to Norman Hall, home of the UF College of Education, he pulled together a team of math and science educators for a brainstorming session. They often do this — conjure up ideas for breaking learning barriers — but they rarely emerge as motivated to immediately manifest their imagination as they did that day.

“In some ways, we were a bit naïve,” Pemberton says. “But that naiveté served us well. We were all in and we went all out.”

Tipping the cap to the Gator Nation, they named this statewide initiative Algebra Nation and aimed for it to be “everywhere” within a dizzying six months. They immediately set out to:

The Race Was On

“Our team saw a need,” Pemberton says, “came up with a potentially viable solution, decided to self-finance it and employed our research-and-development process to build and disseminate Algebra Nation by Jan. 15, 2013.”

The Algebra Nation team dissected the End-of-Course exam and aligned Algebra Nation with the latest state standards. They conducted teacher focus groups around the state, researched online learning, peer tutoring and math instruction; and entered into discussions with tech-platform providers.

At the suggestion of advisers at the Florida Innovation Hub at UF, they met with Study Edge owner Ethan Fieldman, the winner of the inaugural Cade Museum Prize for Innovation, named in honor of Gatorade inventor Robert Cade. Fieldman’s Gainesville-based college tutoring company runs an app for undergrads at UF and other universities that features the core of what the Algebra Nation team sought for middle and high school students.

The team realized they could swiftly customize and enhance this app to fully actualize their vision. So the Lastinger Center and Study Edge joined forces to make Algebra Nation a reality.

“The synergy was there from day one,” Fieldman says. “We prefer and tend to do things on our own. We even print our own booklets. But this partnership made total sense to us.”

The team built the initial version of Algebra Nation on Study Edge’s Facebook-based platform, but they recently created a web-based version for teachers and students who need or wish to bypass Facebook. The web-based app features a responsive design that allows utilization on most computers, smartphones and tablets.

From the start, the Algebra Nation team also partnered with Gov. Rick Scott and the Florida Department of Education, which provided useful information, offered feedback and suggestions and helped get the word out to teachers.

For their part, the teachers also offered extremely valuable feedback. They suggested the Algebra Nation team turn their study guides into a hard-copy Algebra Nation Workbook and record two sets of instructional videos — one at a swift clip for students who understood most of the concepts and the other at a slower pace for students still trying to grasp the ideas.

Also, 30 teachers from around the state stepped into the Study Edge studio across University Avenue from the UF campus to solve math problems on camera.

One of them was Alicia Stephenson, a teacher at UF’s P.K. Yonge Developmental Research School. All of her eighth-graders passed the 2012 Algebra 1 End-of-Course exam, yet she requested to incorporate Algebra Nation into her lessons “as soon as it was ready.”

“Sure, all of my students passed, but not all of them got a 5 [the top score],” Stephenson says. “I felt that Algebra Nation would sharpen their algebra proficiency. I also wanted to see how other teachers explained certain concepts so I could sharpen my lesson plans.”

On January 8, 2013, Stephenson unveiled Algebra Nation in her classroom. That night, she wrote to say how quickly her students took to it — during and after school. She marveled that two students who had never raised their hands in class felt comfortable posting questions and engaging in discussions on the Algebra Wall.

“I was doing a HAPPY DANCE!!” she wrote. “It showed yet another aspect of this valuable tool.”

Stephenson and her students weren’t the only ones using this tool prior to its official launch. Hundreds of teachers and students across the state who had caught wind of the pending release delved in early, organically launching the Algebra Nation movement.

On January 24, 2013, Gov. Scott officially launched Algebra Nation at Dixie Hollins High School in St. Petersburg. After touring classrooms in which teachers and students utilized Algebra Nation, he told a room full of local and state leaders, TV and newspaper reporters, teachers and students: “It’s going to be great for our students. It’s going to help them get through algebra.”

Over the following four months, Algebra Nation exceeded all expectations. More than half of Florida’s middle and high school algebra teachers, representing 1,200 schools in all 67 school districts, used it at that point. In and out of the classrooms, teachers and students watched the instructional videos more than 116,000 times.

Adams, the Santa Rosa County teacher, utilized Algebra Nation as much as possible in her classroom.

“I was convinced that it was an important component of preparing my students for the exam and so I used it in a variety of ways,” Adams says

She showed the instructional videos in her classroom, handed out the workbooks and utilized Algebra Nation to differentiate instruction among her students.

“Some students used it on the school bus,” she says. “For many of them, that meant an extra three hours a day of learning algebra.”

In the weeks leading up to the End-of-Course exam in May, students around the state posted as many as 1,000 daily inquiries, answers and comments on the Study Expert-monitored Algebra Wall. A thousand posts a day, by teenagers, about algebra! Not about pop culture or video games. From across the state, they tutored each other, offering advice and encouragement.

“It made us proud to be Floridians,” Pemberton says.

Students gave the team a great deal of feedback. Among the hundreds of remarks sent via posts, emails and handwritten notes:

– “I hope I get to use this tool throughout my life!”

– “Algebra Nation is so fun and is such a good way to have students practice and learn more.”

– “Math has always been my toughest subject in school … therefore the Algebra Nation team has REALLY been helping me.”

When the results of the 2013 Algebra 1 End-of-Course exam came out, Florida students showed a marked improvement. Ninth-graders boosted their passage rate by more than 8 percentage points, going from a majority failing to a majority passing.

“Although we’ve waited until after our first year to conduct a scholarly study of Algebra Nation,” Pemberton says, “we found the results extremely encouraging.”

Seeing the difference Algebra Nation made for their students, teachers from around the state called their representatives in Tallahassee to ask the Florida Legislature to expand the program in the 2013-14 school year.

At the same time, the Bill and Melinda Gates Foundation invited the Algebra Nation team to apply for a $250,000, two-year grant.

As the team scrambled to write the Gates proposal, they got an unexpected call: The Florida Legislature was including a $2 million allocation for the project in the 2013-14 state budget.

After investing about $400,000 in Algebra Nation the first year, UF and Study Edge “had planned to continue self-financing it the second year,” Pemberton says. “We’re honored that the Florida Legislature has independently recognized that Algebra Nation is making a difference for teachers, students and parents.”

With the $2 million legislative allocation, the Algebra Nation team is substantially enhancing the program’s reach and impact in many ways, including:

The capacity to take Algebra Nation to the next level grew again when the team learned it had also earned the Gates grant. Over the next two years, they plan to design, build, field-test and implement the Algebra Nation Common Core Teacher Development Network.

This online network — a new component of Algebra Nation devoted to teachers — will help Florida smooth the transition to the new Common Core State Standards.

During the summer of 2013, when Pemberton visited teachers and administrators around the state, he heard a different take on the Algebra 1 exam. Educators felt better, more confident about this test – thanks in large part, they said, to Algebra Nation.

“One teacher who utilized Algebra Nation extensively told me her passage rate increased by 40 percent,” Pemberton says. “Now we want to have that kind of impact on every classroom in Florida.”

Adams, the Santa Rosa County teacher, saw a similarly dramatic increase in her students’ scores: Their passage rate leaped from 45 percent to 70 percent.

“The scores for the EOC are released at 5 am. I asked my principal to call me as soon as she received them,” Adams says. “The index card on which I scribbled my students’ scores looks like chicken scratch because my hands were shaking. Seventy percent of my students passed. We made great gains and assuredly, Algebra Nation was a key player in those advancements.”

She’s so convinced that this program makes a significant difference that she has joined the Algebra Nation team to work with teachers around the state in incorporating it into their classrooms.

“I know what Algebra Nation can do,” Adams says. “Now I’m excited to help as many teachers and students as possible to benefit from it. I keep that index card on my desk. When things get difficult, it reminds me why this is a battle worth fighting”