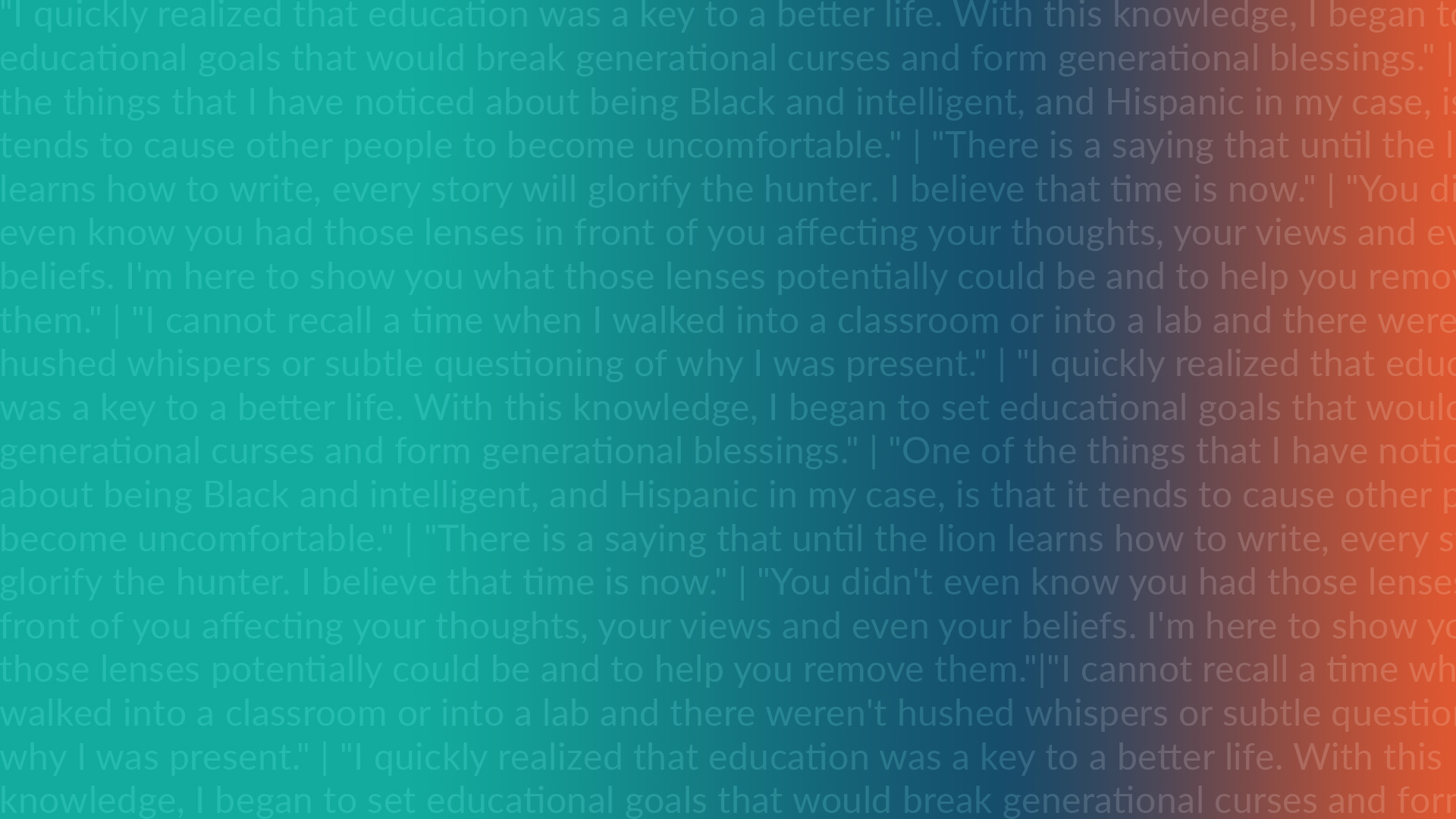 Storytelling as a vehicle for change

In January, the UF Clinical and Translational Science Institute hosted “Black Voices in Research,” an online storytelling event featuring five Black members of the UF biomedical research community. The program was developed by the CTSI’s Diversity and Cultural Competency Council, known as DC3.

“This event is a call to listen more deeply, to be present with one another and to invest in each other and our experiences,” said Duane Mitchell, director of the CTSI. “There is something unique to learn from each storyteller, and it is our hope that this event will be the beginning of a new chapter in our continuing mission to promote an inclusive, diverse, accessible and equitable community here at the University of Florida and within the Clinical and Translational Science Institute.”

Here are excerpts from each of the presenters. To hear more, visit
www.ctsi.ufl.edu/2020/09/28/black-voices-in-research-storytelling-event/

Shantrel Canidate is a clinical assistant professor in the Department of Epidemiology. She is a social and behavioral scientist and epidemiologist with an extensive background in HIV outreach, public health research and intervention training for clinical-based studies.

“I am no stranger to adversity challenges or setbacks. For as long as I can remember, I have been turning life’s lemons into lemonade. I have managed to defy the odds and achieve success, all while living in my truth. I am the descendant of a generation of Black sharecroppers born and raised in rural Georgia.

“As a little girl, I would attend adult education classes with my grandmother and great aunt, who were over 50 but who both believed that it was never too late to achieve an education … I quickly realized that education was a key to a better life. With this knowledge, I began to set educational goals that would break generational curses and form generational blessings.”

Canidate pursued that education with purpose, ultimately earning a master’s of public health and a doctorate in social and behavioral sciences. But the road was not easy, and after becoming a new mother, she and her husband decided to move to Daytona Beach to be closer to family.

“We commuted over 200 miles to and from work each day for almost a year and a half. During that time I experienced many challenges. I watered the road with my tears, doubted my abilities and even contemplated giving up a career in academic research.”

Ultimately, Canidate was hired as a clinical assistant professor in the Department of Epidemiology and returned to Gainesville to pursue her research on HIV in the African American community.

“My research is focused on eliminating HIV disparities among African Americans. I want to empower African Americans to learn about the impact of HIV across all levels and to come together to combat this disease together. More importantly, I want to inspire people. I want someone to look at me and say ‘You know what Shantrel, it was because of you that I did not give up.’”

Erica Guerrido is a research and compliance administrator in the Office of Research Affairs at the UF College of Medicine in Jacksonville. She is also an adjunct professor in the Department of Public Health at the University of North Florida’s Brooks College of Health.

Guerrido recalls many incidences in her life where people treated her like she didn’t belong.

“One of the things that I have noticed about being Black and intelligent, and Hispanic in my case, is that it tends to cause other people to become uncomfortable.”

Growing up in Iceland, where her mother was stationed at a U.S. military base, Guerrido recalls clearly the sting of others underestimating her. As graduation approached for the 20 students in her high school class, she learned that she was in the running for valedictorian.

“I had two classmates who just knew that they had it in the bag … They were going to be number one and number two and nobody else was going to have that opportunity or that chance. When we got the announcement that I was in the running, it’s like their whole world stood still. There’s no way that I … daughter of a single, Black woman could have been in the running.”

Guerrido was named valedictorian, but the experience changed her.

“That experience kind of colored the rest of what would happen in my life, seeing how people react when they think that only they have a right and a privilege to something”

There were other incidences, she says.

“When I got my first official grown-up job after college, someone I love told me that I only got it because I was Black, and that the place that I was working needed to check the diversity box just to say that they had someone Black on the staff.”

More recently, Guerrido recounted an incident where some co-workers treated her like “hired help,” leaving her to carry a large box of materials instead of offering to help.

“I will admit that these experiences have made me question myself … but they don’t define me,” she says.

“The term going around now is Black Girl Magic, and that’s what I have … These examples have made me the strong and resilient woman that I am today.”

Samuel Inkabi is a graduate research assistant in biomedical sciences. He holds a master’s in experimental and medical biosciences from Linkoping University in Sweden and a bachelor’s in biochemistry from Kwame Nkrumah University of Science and Technology, Kumasi, Ghana.

Inkabi says several experiences motivated him to pursue a biomedical sciences degree, including a project observing transmission of diseases in Ghana and an undergraduate project looking for leukemia therapies.

“Understanding the many lives that have been lost and continue to be lost due to leukemia and to be able to make a meaningful contribution to the story of treating, if not curing, leukemia not only inspired but motivated me to make research my profession.”

“Obviously, there are not a lot of Africans involved in research,” he says, but he hopes that succeeding in science, maybe even winning a Nobel Prize, “will serve as an inspiration for the upcoming generation from Africa to also pursue research as a career.”

Inkabi started his research career at the University of Florida studying the disparity in the pathogenesis of laryngeal cancers between whites and Blacks and is now studying a microbe that has been implicated in oral infections.

“There is a saying that until the lion learns how to write, every story will glorify the hunter. I believe that time is now. Having found our voices, we minorities are capable of telling our stories better, and one way of telling our stories is through the diverse research studies we do, because our stories have a great contribution in solving the problems we have as a people and that is why diversity in research is important to me.”

Tiffany Danielle Chisholm Pineda has held multiple positions at the University of Florida over the last 25 years, including as education coordinator for the university’s institutional review boards that review all human subject research and now as regulatory specialist with the Clinical and Translational Sciences Institute, where she helped to establish the Diversity and Cultural Competence Council.

Pineda compares understanding of different cultures to getting your eyes tested for new glasses.

“As the doctor flips the lens and asks A or B, B or C. Lens A is growing up in in the Midwest, not knowing any people of a different or diverse culture. Lens B may be going to a predominantly white institution. Lens C could be the portrayal of Black people on TV … You didn’t even know you had those lenses in front of you affecting your thoughts, your views and even your beliefs. I’m here to show you what those lenses potentially could be and to help you remove them.

“I know that we all have multiple lenses, but I am here to share my story so that you can look and see what needs to be done to evolve, to grow, to clean or even throw away your lenses so that these stories are no longer being told, even in 2021.”

“I cannot recall a time when I walked into a classroom or into a lab and there weren’t hushed whispers or subtle questioning of why I was present. These hushed whispers and questioning … spoke louder than words … I wondered if maybe I could prove to them that I belonged, but I also quickly learned that it was more important to prove it to myself that I belonged in these spaces.”

As she neared the end of her graduate education Moore found herself at a crossroads.

“Life as a stressed out professor was not for me, or so I thought. I sought industry internships, a safe harbor to divorce myself from feeling like an other in academia, but the shoe did not fit for me in industry, and so, like Goldilocks, I went in search of other opportunities – consulting, too big; higher education, too many lumps; leadership development, too small. I fought even considering a career as an academic, but one day it dawned on me that the only way to create a space for Black women who felt similarly othered or similarly uncomfortable walking into classrooms or laboratories was to become a leader in those classrooms.”