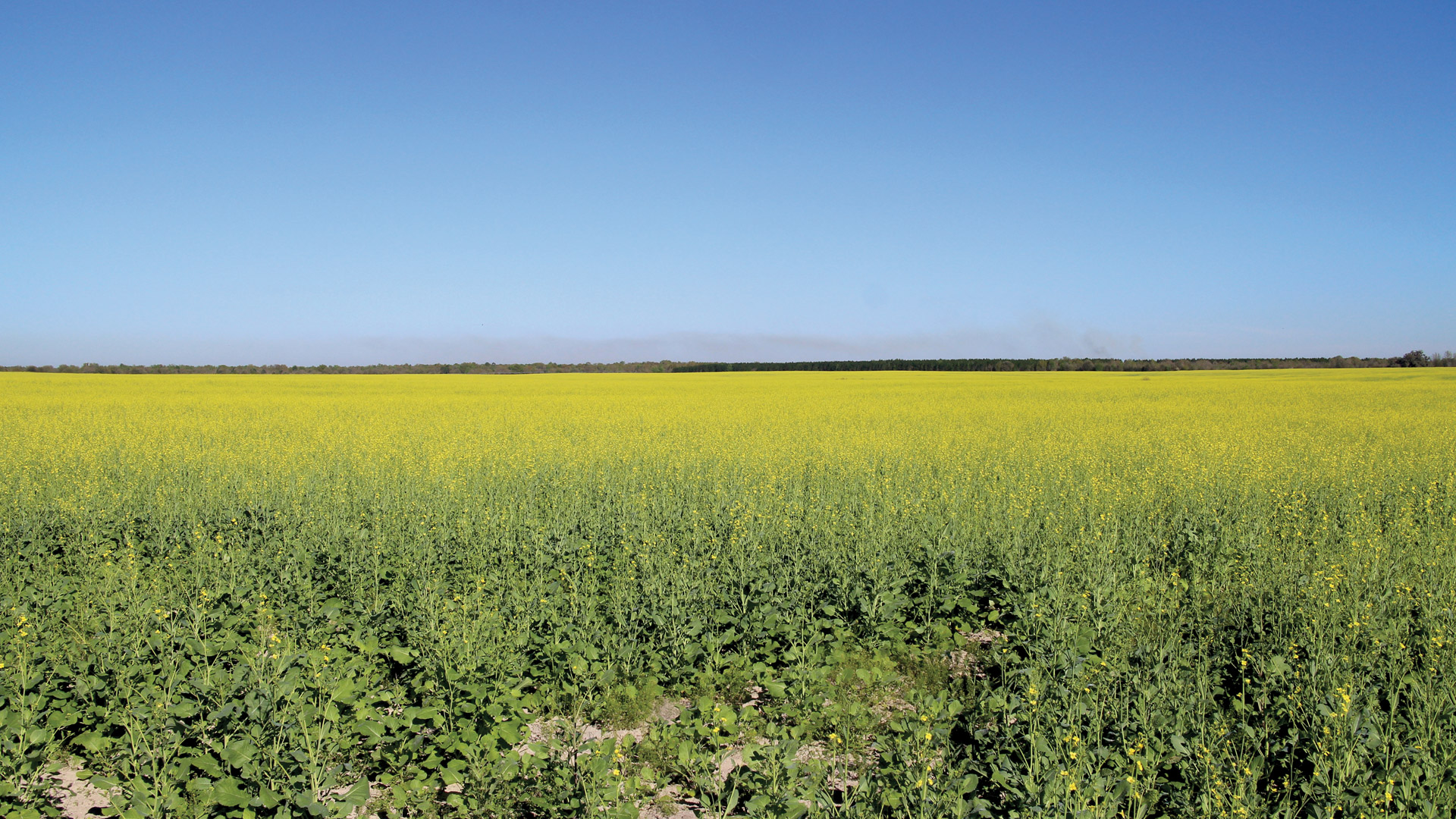 Agronomist David Wright sees a future where jet fuel comes from a field of yellow flowers.

The flowers top the stalks of Brassica carinata, a variety of mustard whose seeds produce oil that can easily be converted into jet and diesel fuels that are nearly identical to their petroleum counterparts.

In 10 years of working with carinata at the University of Florida’s North Florida Research and Education Center in Quincy, Wright and his colleagues say they’ve discovered that jet and diesel fuels are only one benefit of the humble mustard. At each stage in the growth cycle, carinata offers benefits to farmers, says Sheeja George, research project manager.

“Carinata fits for the Southeast in the winter when farmers grow nothing else, and it gives them an opportunity to build carbon in the soil and an opportunity to produce a high-protein meal that can be used to feed chickens and cows,” George says, “all on top of harvesting the seeds for oil for biofuel.”

In recognition of carinata’s potential, the USDA’s National Institute of Food and Agriculture awarded $15 million in 2017 to a public/private partnership led by UF called SPARC, the Southeast Partnership for Advanced Renewables from Carinata.

George says 2022 will be a key year for SPARC, as varieties with higher yields and improved genetic traits are being field tested with the ultimate goal of giving growers a chance to make money from their fields year-round.

An offhand comment in 2010 led to the eventual creation of the $15 million SPARC project. Wright and George and their colleagues were working on a project with camelina, another oilseed, and a biofuels industry representative happened to show up at a field day.

“They were doing all this research,” recalls chemical engineer Ed Coppola, who had driven to Quincy from Panama City, where he works with the Better Fuels Group at Applied Research Associates. “I asked them if they had ever considered carinata?”

Coppola filled them in, and the academic team and the industry team have been working together ever since.

As Wright learned more about carinata, he was intrigued enough to seek seed funding through the dean’s office in the Institute of Food and Agricultural Sciences. The seed funding allowed the team to plant several acres of carinata at the research center in Quincy and get acquainted with the emerging crop.

“This was an absolutely new crop,” George says. “We quickly saw that it had great promise. We had worked with other oil seeds, but in comparison, carinata seemed so much more promising in terms of yield and vigor.”

Carinata was a perfect fit for a public/private partnership.

Coppola and the UF researchers were already sold. Nuseed, a global seed company that owns the carinata germplasm, heads up plant breeding and crop improvement efforts. Nine universities in the southeast also signed up and the collaborative venture pulled in the $15 million grant. As the group expanded to the Carolinas, Georgia, Alabama and Mississippi, they had to find ways to make the crop a fit in different soils and climates. Even in balmy Florida, climate can be a challenge.

“We have moderate winters, but we still have a winter,” George says. “Those occasional times when we freeze, this crop didn’t do well.”

Rick Bennett, a plant breeder with Nuseed who has worked with carinata since 2012, says cold tolerance will be a key to broadening the range for growing carinata throughout the south.

Wright has spent much of four-plus decades of research looking for the right winter cover crop for North Florida. Most farmland, he says, is left to the weeds in the winter, with less than 25 percent planted with a winter cover crop, a missed opportunity for much-needed farm income.

In the summer, Florida farmers focus on tried-and-true crops that pay the bills. Carinata is only grown in the winter, when cropland is fallow, so it does not displace the summer crops. The situation creates a win-win for farmers.

“We have to be sure the crop is profitable to growers in the winter and does not interfere with cotton, soybean, corn and peanuts,” Wright says. “Otherwise, growers will not accept it.”

Carinata has a long growing season — November to May — so the timeline is tight. It must be planted right after summer crops are harvested and harvested quickly before the next summer planting season.

During their work with carinata, the team found it is best to rotate carinata in a field every three years. Corn and cotton leave nitrogen in the soil. Carinata removes it at the rate of roughly 50 pounds of nitrogen per acre and keeps it from leaching into groundwater or running off into streams. Carinata leaves the soil richer, creating a better growing environment when summer crops take their turn.

Bennett says Nuseed is also working on shortening the maturity cycle for carinata.

“Rotation is important. We need a maturity cycle that is appropriate for growing carinata in the winter, so it’s not pushing into soybeans or peanuts or whatever is next in the rotation. So early maturity is an important trait,” Bennett says.

Carinata does better than other oil seeds in heat and drought conditions. When harvested, carinata pods generally don’t shatter — a problem with other oil seeds — so there is little to no loss of its seeds, which are larger than those of other oilseed crops. Carinata plants are larger as well, three to four times larger than camelina, creating more biomass.

Only half of the carinata seed is oil, but the other half is not wasted. The meal created after the oil is extracted from the seeds is roughly 45 percent protein, making it ideal for beef cattle and other livestock.

Early reactions from growers were a mixed bag, George says, but their feedback has been valuable in directing research.

The latest research has revolved around new genetics to make carinata more cold-tolerant and easier to manage.

“There’s a lot of new genetics we can use to replace some of the existing genetics. We want to make it fit for them so that it doesn’t interfere with their regular cropping systems,” George says. “We are still adding to our toolbox.”

Carinata seeds have about 40 to 45% oil, roughly in the same ballpark as peanuts, sesame, sunflower seeds, walnuts, palm seeds and coconut.

The difference between carinata and these other oil-producing all-stars is that carinata is not edible, and that makes it a winner, hands-down, as a biofuel.

Growth in biofuels has created a shortage of land for food crops in some areas of the world, creating a sometimes contentious food vs. fuel debate in biofuel circles. About 33% of the U.S. corn crop, for example, is used to make ethanol. Some critics have said that using corn for fuel drives up food prices and takes corn out of production as food or a source of livestock feed.

Sidestepping that debate will require oil from non-food crops. Like carinata.

George says the renewable energy industry partners in SPARC understand that food crops are not sustainable as biofuel because they are needed for food. Food-grade oils are also more expensive, but since carinata’s oil is high in a fatty acid known as erucic acid, it’s considered inedible.

“The industry does not want a crop that competes with a food crop or that would displace another crop already in the landscape,” George says.

Carinata, she says, is a purpose-grown crop, and that purpose is fuel. The byproduct, the meal left after oil extraction, creates a second income stream for growers.

“There’s a big demand out there for these kinds of feedstocks, and we want to connect that demand to our farmers,” George says.

Depending on who you ask, the world will run out of oil by the end of this century. Even if more oil is discovered or new technologies extend its usage, oil is a finite resource.

Carinata packs all the potential of petroleum crude oil into a seed, making it a viable renewable alternative to petroleum, George says. For military and aviation uses, sustainable aviation fuel has long been a goal, with the military hoping to switch to biofuels by 2025.

Commercial aviation, too, has had success with jet fuel derived from carinata. Qantas and United Airlines have both flown passenger jets with the biofuel, which George describes as a drop-in fuel that requires no retrofitting of jet engines.

The reduction in carbon emissions from carinata is estimated to be 60-80% compared to regular jet fuel, and Bennett says the timing could not be better for carinata research with the Paris Climate Accords and many government mandates to reduce greenhouse gas emissions.

“I just think the timing is fantastic. The need is there, the demand is crazy, and thanks to the University of Florida team and the SPARC program, we’re at a really good point to be able to step in and meet that need.”

George agrees, and says as non-food, industrial oilseed crops go, her money is on carinata.

“Carinata is a complete solution that just works,” George says.

And swaying fields of yellow flowers make for better scenery than oil wells any day.