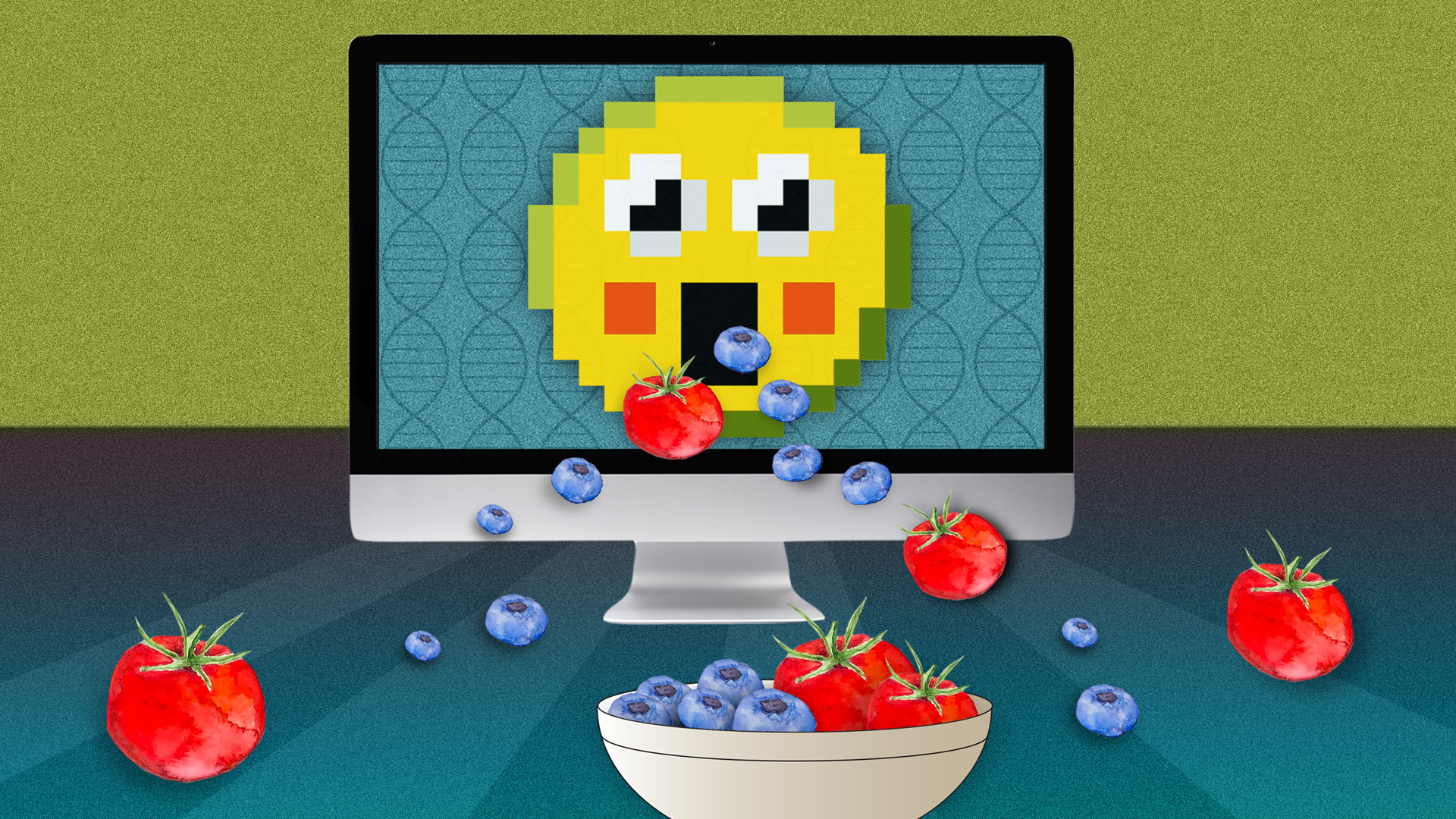 Here’s how AI could bring better fruit to your table

On a farm outside Gainesville, plant geneticist Patricio Muñoz strides through rows of shoulder-high blueberry bushes. He’ll log up to 10 miles a day traversing experimental plots where a single 4-acre field can hold 300 new varieties, berries of unparalleled deliciousness that you can’t find in any farmer’s market or grocery store — yet.

Along the way, he conducts what’s known as a bite test, sampling each variety and noting its flavor. Some have undertones of rose, some of raspberry; some are bright and floral, others as sweet as jelly.

But while advances in plant breeding have shortened the time from lab to table, developing a new cultivar and taking it to market can take a decade or more.

Muñoz and his colleagues at the University of Florida envision a quicker method: exploring the natural variations in plant genetics using artificial intelligence. The applications extend far beyond blueberries, a growing sector of Florida’s $182.6 billion agriculture industry.

Their brainchild, the AI Connoisseur, would not only give Florida farms an edge, but make healthy food more palatable to more people, bringing varieties with heirloom-quality flavor within everyone’s reach.

All they’d have to do is teach a computer to taste.

Here, try this one,” Muñoz says, offering a plump berry of a variety called Optimus, named for the Transformers character Optimus Prime because it can be harvested by machine. It’s firm, sweet, with a hint of acidity.

“Keep that flavor in your memory, then try this one,” Muñoz says, offering a variety yet to be named.

It’s not easy to retain the memory of a blueberry, especially while tasting a different one. Plant breeders not only do this, but also train their palates to reflect the average consumer’s preferences, not their own. They use these skills to winnow down acres of potential candidates to just a handful of varieties, which then go to panels of taste testers who select their favorites.

UF’s Institute of Food and Agricultural Sciences has been running such taste panels for decades, asking volunteers to rate the taste, texture and appeal of new varieties, as well as what they’d pay for them. If a new variety is deemed marketable, it then goes to growers and, eventually, the grocery store.

What can AI bring to the table? With taste panels costing up to $4,000 and requiring up to 100 people, hundreds of potentially delicious cultivars are eliminated before reaching that point — essentially by educated guess, says Marcio Resende, a sweet corn breeder and one of the leaders of the AI Connoisseur research.

“It’s very subjective,” he says. “Not only is it the opinion of a single person, but there’s some bias there, because no matter how good the fruit or vegetable is, by the end of the day you’re tired of eating it. The last one is never going to taste as good as the first.”

If the team could use taste-test data to teach artificial intelligence to predict what a typical customer enjoys, they could avoid that bias. But unlike single traits such as sweetness, acidity and bitterness, flavor is notoriously tricky to pin down.

Unraveling the ingredients of flavor

Biochemist Denise Tieman scoops chunks of juicy ripe tomatoes from a cutting board into a long plastic tube, seals it, then carries it to a machine that will tell her the components that create its taste. Using a procedure developed at UF, she loads the tubes into a vacuum pump that samples the volatile organic compounds (VOCs) the tomatoes emit.

Outside of the plant breeding world, VOCs might be more commonly associated with paint fumes than fresh veggies, but they form the essence of flavor, and what we don’t know about them far outpaces what we do.

When you bite into a fresh blueberry or tomato and taste its sugar and acid on your tongue, that’s just the beginning. As you chew and swallow, VOCs reach olfactory receptors in your nose and the back of your throat, and flavor emerges. (That’s why foods don’t taste right when your nose is stuffy. Smell loss from COVID-19 also comes from a breakdown along the olfactory-perception highway.)

If you’ve ever tasted a tomato without much flavor — and who hasn’t — lost VOCs are the culprit. E-2-hexenal and phenylacetaldehyde don’t sound delicious, but they’re some of the 400 volatiles that make a tomato a tomato, contributing sharp, leafy aromas for the former, a mix of hyacinth, honey and cocoa for the latter.

Over decades of selection for traits that made tomatoes easier to grow, harvest and ship, many varieties lost the heady, quintessentially summertime aroma that made them the world’s most popular produce.

For each food crop, different volatiles take center stage, and it’s not just their presence but their interaction that makes it mouthwatering. Tieman’s mission is to keep the modern tomato’s practical traits while adding the critical components back in. But while sugar and acid are easy to measure, VOCs have presented a challenge.

“Flavor’s been terribly difficult to breed for,” Tieman says. “There’s been no good way to define flavor or know how to breed for it.”

With the AI Connoisseur, however, that could change.

Resende and Muñoz teamed up with research scientist Felipe Ferrão and doctoral student Vincent Colantonio to code the AI Connoisseur and run its machine-learning models on UF’s HiPerGator AI supercomputer — an opportunity Colantonio says was only possible because of UF’s commitment to infusing AI across the curriculum.

“It was through UF’s initiative to bring AI to every classroom that a student like me, in horticultural sciences, could have opportunities and resources to perform AI research,”
he says.

By matching taste tests with each variety’s chemical composition, the researchers hypothesized, they could pinpoint key compounds for different crops, yielding targeted pathways toward flavor. And with an accurate AI prediction model, they could test thousands of potential varieties by asking the AI Connoisseur to extrapolate how consumers would like them — a quicker route to better breeds.

What’s next for the AI Connoisseur

In Muñoz’s office, on the outer reaches of the Gainesville campus in a building surrounded by greenhouses and groves, Muñoz and Resende look over dozens of clamshell containers holding the blueberry varieties headed to taste testing this year. They cover the surface of Muñoz’s desk, but with the AI Connoisseur, the berries he can test could fill a three-car garage.

In a study published in the journal PNAS this year, they showed that their model works: It was able to accurately predict what consumers liked and show the compounds that contributed to flavor in blueberries and tomatoes. The method could be applied to any food crop where the data is available, such as citrus and strawberries, Resende says.

The technology won’t replace taste testing: It doesn’t evaluate factors like texture, appearance, or cultural factors that can influence our preferences. But it can get tomorrow’s healthy foods on our plates sooner. Next, Tieman envisions identifying genetic markers that correlate to those key compounds, allowing scientists to begin selection on tiny plants instead of waiting for them to bear fruit.

Muñoz imagines a produce section where boutique blueberries bear the kind of descriptors you’d find on coffee, beer or chocolate: sweet and jammy types for kids; aromatic, floral ones for more sophisticated palates.

They hope tastier produce entices consumers to come back for more — a boon for the 90% of Americans whose fruit and veg intake falls short of the recommended amount.

“Processed foods are engineered for you to love them,” Muñoz says. “Why can’t we use technology to do the same thing for fruits and vegetables?”