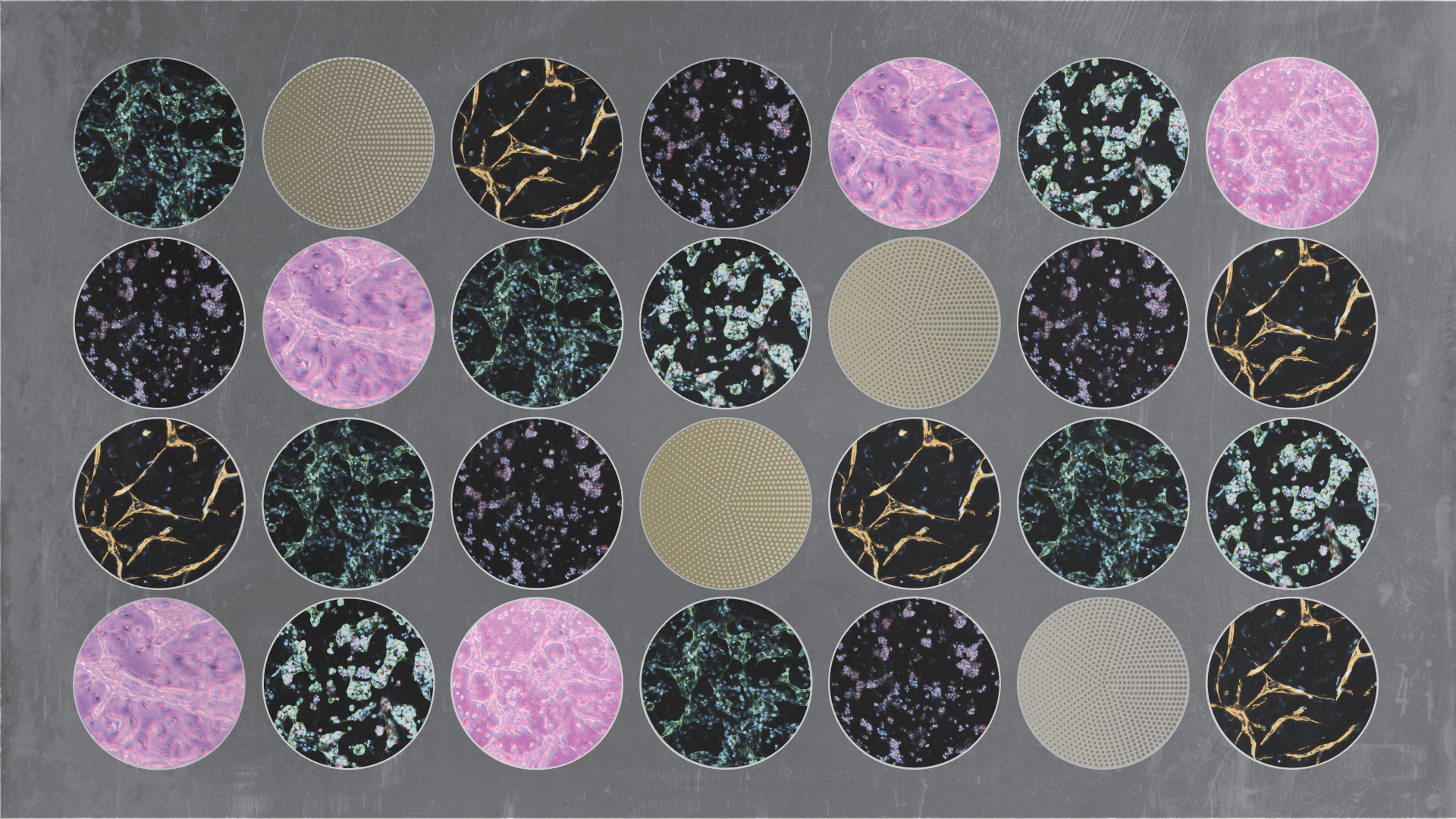 Josephine Allen and Erika Moore are keenly aware of the racial health disparities in the conditions they study. But until recently, their experiments — like those of most biomedical engineers — didn’t incorporate information on ancestry at all.

Allen develops materials used in drug delivery and tissue regeneration for cardiovascular disease, the nation’s leading cause of death, with Black Americans 30 percent more likely to die from heart disease than white Americans. Moore focuses on biomaterials that model how immune cells respond, which could be used to test treatments for lupus. Nine out of 10 people with systemic lupus erythematosus are women, with around 60 percent of those women of color.

In a survey of top biomedical journals, however, just 5 percent of studies reported the demographics of the cells used — and the majority were from European ancestors.

“It feels like a missing piece of the puzzle,” Allen says.

Moore, Allen and University of Florida geneticist Connie Mulligan are leading a call for biomedical scientists to factor in the ancestry of cells used in their work.

“It’s a huge blind spot,” says Moore, a Forbes 30 Under 30 in Healthcare honoree Allen helped recruit to UF in 2018. “We know that cells have diverging responses to biomaterials depending on genetic ancestry. In any disease where we want to apply biomedical sciences, we have to unpack who is being affected by the disease and which cells we’re using.”

Moore points to a 2015 study that found that for the 167 drugs submitted to the U.S. Food and Drug Administration for approval between 2009 and 2015, one-fifth showed different responses in cells with different ancestral origins. But in bioengineering, reporting — or even considering  — the demographics of the tissues used in studies is far from the norm. That oversight can hamper scientists’ ability to reproduce the results, mask a lack of diversity in samples used, and make it more difficult to identify areas that need further study, the researchers say.

Allen, Moore and Mulligan believe that consideration of ancestry could accelerate the pace of discovery for populations and diseases that have been historically underrepresented in research. But to advance their cause, they’d have to get not only researchers, but commercial cell vendors and academic journals to revolutionize long-established practices. With co-author Elizabeth Wayne of Carnegie Mellon University, they took their argument to the journal Nature Reviews, laying out their reasons for challenging the status quo in a commentary that sparked interest from the global biological sciences community.

“It’s a significant shift,” Allen says, “but it’s not impossible.”

Race is a social construct, not a biological one. So why would cells from people of different ancestral lineages behave differently in the lab?

Mulligan, an anthropologist who studies genetic and sociocultural factors in health disparities, explains.

Moore and Allen knew they needed input from outside of engineering to clearly convey their goals. They looked around the country before finding the expertise they needed right on the UF campus. When they read Mulligan’s 2021 paper “Systemic racism can get under our skin and into our genes” — which theorizes how systemic racism could cause changes in genetic expression that drive health disparities  — they knew they had found the ideal collaborator.

“Because of Connie’s expertise as not only an anthropologist, but also as a geneticist, she really fit the goal of everything we wanted to understand,” Moore says.

Mulligan enthusiastically signed on to the project and began sending her co-authors journal articles, including one linking discrimination to blood levels of cytokines, proteins that help regulate immune and inflammation response. In the 2015 study, African-American adolescents who experienced discrimination showed elevated cytokine levels for more than three years after the event.

“When I read some of those studies, I thought, wow, if we get this outlier, maybe that person has received extreme racial discrimination. That’s going to significantly skew our results, but we don’t take it into consideration right now,” Moore says. “It was mind opening to have those conversations.”

What is Genetic Ancestry?

Genetic ancestry is one way of accounting for variation across samples at the cellular level.

If you’ve ever wondered about your own lineage, you might have turned to a home DNA test, which estimates genetic ancestry by looking for hallmark sequences corresponding to different regions. Ancestry goes beyond genetic markers: It’s also shaped by the social and cultural traditions of your family background.

“Your genes might say one thing, and your biological phenotype might tell something, but culturally or psychologically, you might think something very different about your ancestry,” Mulligan explains. “All of these phenomena are true. They just measure different aspects of ancestry, and they have very clear impacts on health.”

That complexity could be one of the reasons some researchers hesitate to consider ancestral identifiers in their studies. Another may be a reluctance to reveal that the cells they’re using aren’t very diverse. But transparency is a meaningful first step, Allen says.

“If you’re using cells in any capacity, just report what you’re using,” she says. “It’s necessary context for your study, whatever your study is about.”

Beyond transparency, the researchers hope their appeal will inspire others to be more intentional in their experimental design.

“The idea isn’t to say that every experiment needs to include everyone. We know that’s not always going to be possible, and it’s not going to apply to all diseases,” Moore says. “But people really need to consider the ancestry of cells when they’re modeling a disease that has a disparity or ancestral component to it. If we’re only studying cells from males or populations with higher genetic ancestry along European lineages, we’re missing out.”

When they published their Nature Reviews paper, Allen, Moore and Mulligan wondered how the field would react.

Not in this case.

“We heard from people on Twitter, on LinkedIn, people we had never had contact with before, saying, ‘I’m so glad you brought this up. How can we adopt some of your techniques and principles?’” Moore says.

Students reached out to ask how to make the topic their field of study. Researchers around the world tweeted the paper, which Lehigh University Professor Lesley Chow called a “must-read article by leaders in our field.”

The three researchers hope the attention will prompt scientists and engineers to consider what cells they’re using and disclose the demographics when they publish. When Moore gave a talk about the paper at the University of Virginia, a researcher pointed out that ancestry would also be relevant in biomedical engineering for diseases linked to Jewish heritage.

“It’s just being really, really intentional about including other groups in your studies however you can — and if not, then at least tell us who you did include so that gap can be identified,” Allen says. “It starts to open the door that maybe we’re missing something, and we should all take a step back and think about how we can make our work more impactful.”

Researchers use either primary cells, which come directly from patients, or cell lines propagated in a lab, which can be cheaper and easier to obtain but don’t perfectly mimic the behavior of primary cells. Cell vendors could help by proactively disclosing the demographics of cells instead of making researchers request them. Journals and funding agencies could require disclosure of cell ancestry, which could, in turn, nudge researchers to consider other groups. The cumulative effect could create more demand for diverse cell lines, spurring vendors to expand their offerings, the researchers say. Efforts like the NIH’s All of Us program — which aims to enroll a million participants, especially from underrepresented groups, to share samples and health data — are addressing some of the gaps.

“There is now a call to represent other populations,” Moore says. “It’s not a mandate, it’s a request for increased understanding and communication amongst researchers. I hope it ignites others to say, ‘What can we do? Who are we considering in our experiments?’ It fills my heart with such joy to have these conversations.”