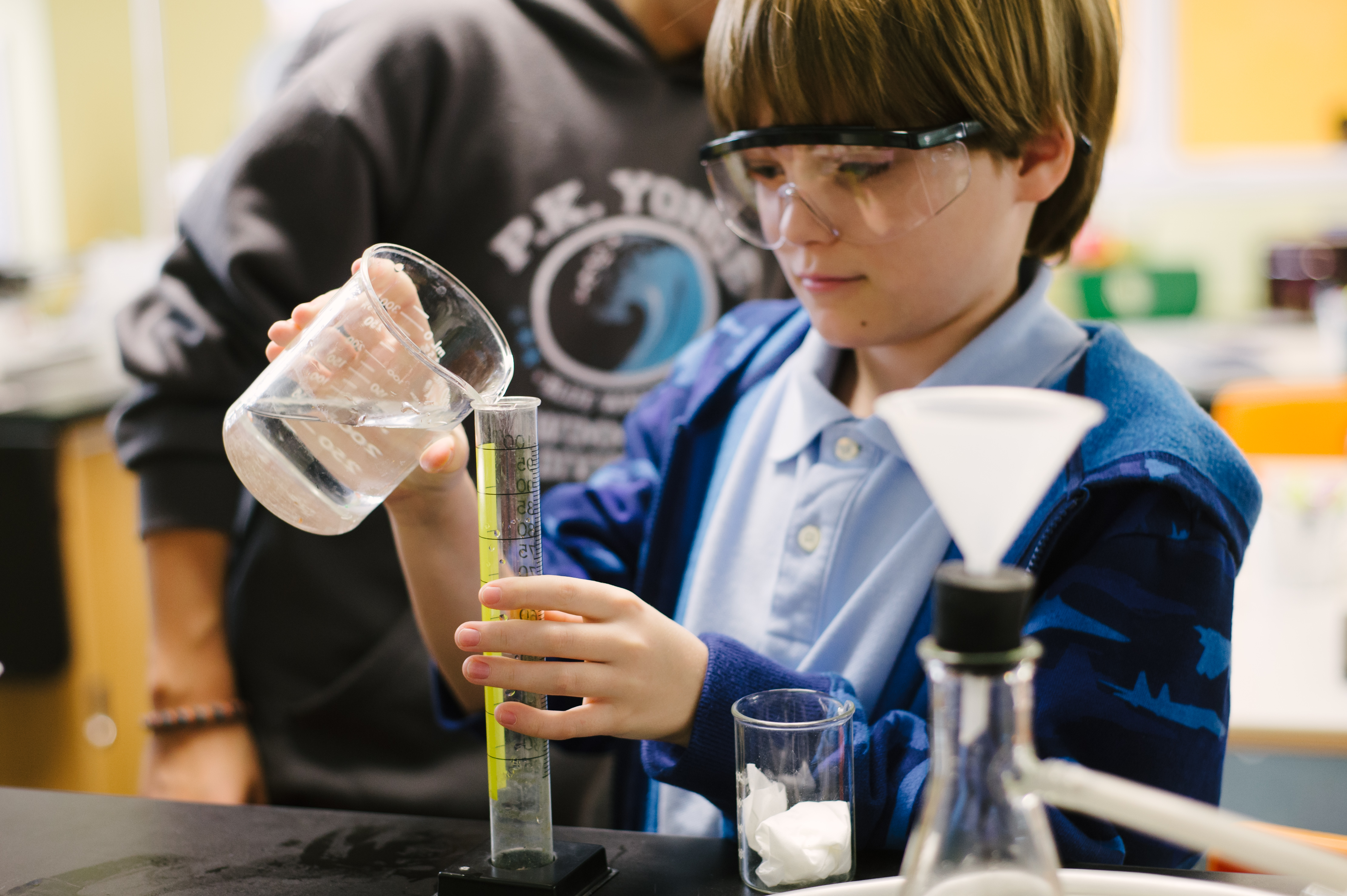 Any parent who has ever watched a child struggle through middle school science knows that the right teacher can make all the difference. For tweens distracted by everything from hormones to iPhones, it’s a short distance from fascinating to boring.

Mayra Cordero is one of those teachers who makes science fascinating. For a lesson on the food web, she assigned each of her students an organism, then connected them all with colored yarn. For a lesson on the properties of gases, she illustrated the concept by inflating and deflating a basketball.

“It is not only about doing science and having fun; it is about what can we learn from the activities we’re doing. This is how students gain deeper knowledge about a specific scientific concept,” says Cordero, whose parents were both educators and who holds a doctorate in pharmacology.

Cordero, a sixth-grade teacher at UF’s P.K. Yonge Developmental Research School, is part of an experiment under way in the College of Education to breathe new life into middle school science.

For years, education leaders have been watching the United States slip further behind other industrialized nations in K-12 science performance. But despite a lot of rhetoric about the importance of the so-called STEM subjects of science, technology, engineering and math to the U.S. economy, funding for new teachers specifically trained in these subjects has been hard to find in these economically austere times.

The result is a generation of American students who rank far behind their peers from other countries in their mastery of science and mathematics. Scores from a 2010 Program for International Student Assessment report showed the U.S. ranked 17th out of 34 industrialized countries in science scores among 15-year-old students.

While there’s been no shortage of ideas for reversing the trend, one thing is clear: the more knowledgeable a teacher is about science, the more he or she is able to engage students. But even in the best school districts there are teachers with little to no training in the sciences trying to keep one step ahead of their students in mastering the subjects.

Lynda Hayes, Rose Pringle, Cordero and their colleagues at UF and in school districts around north Florida are hoping to reverse that trend by creating a cadre of highly trained science instructors who can educate and energize other teachers in their home districts with a new kind of science class.

With the support of a $5 million grant from the National Science Foundation, 40 middle school science teachers in 20 school districts will earn master’s degrees in science education in two years. The program, called U-FUTuRES, includes 30 credit-hours of online and face-to-face instruction by UF professors. It is free for the initial cadre of teachers, with the NSF grant covering their tuition, valued at $21,000 each. Beyond the grant period, Hayes says the College of Education plans to continue offering the master’s degree program to support the state’s efforts to improve science education opportunities for Florida’s K-12 students.

“As Science Teacher Leaders, they will then coach 400 middle school science teachers in their home districts,” says Pringle, an associate professor of science education. “Nearly 60,000 middle school students will be impacted, primarily in high-poverty rural and urban areas.”

Pringle and Hayes, P.K. Yonge’s director, say a key to the program is that it helps teachers in three ways — by strengthening their basic science knowledge, by providing them with proven science-specific practices for engaging students and by offering them a new, more hands-on curriculum.

“Teachers cannot teach what they do not know. They have to know the science,” Pringle says. “So a major component of our institute involves nine credit hours of science content taught by UF professors. These science professors are teaching courses designed to deepen the teachers’ content knowledge, to really prepare them to go deep with the middle school science.”

As the father of twin fourth-graders, Hershfield fully appreciates the difference a good teacher can make. And as a faculty member who sees thousands of freshmen in his introductory physics courses, he also appreciates the importance of reaching students early.

While Hershfield was bolstering the teachers’ science knowledge, Pringle was introducing them to a new curriculum designed to get students more engaged in the classroom.

“Unfortunately, many kids lose interest in science during middle school,” Pringle says. “We want to keep them engaged so that when they get to high school they are motivated to take science classes and then pursue a science degree.”

Hayes says the team was fortunate to discover a new science curriculum developed at the University of Michigan and Northwestern University that was a perfect fit for what they were trying to accomplish.

“They’d spent 10 years and $10 million from NSF developing this curriculum,” Hayes says. “It’s rare to find a curriculum where that much time and money is invested in its development. It’s also rare that they had scientists, science educators and literacy folks working together on the curriculum, so they were really trying to bring the whole package together.”

“We’re moving away from students being able to just repeat facts that they forget tomorrow anyway,” Pringle says. “This curriculum builds on itself so that they’re introduced to certain concepts in one unit and that’s reinforced and deepened in another unit, and that goes from sixth through eighth grade. So you have a bunch of kids who not only have the content knowledge but they also develop the skills, the values and the attitudes that scientists have.”

Cordero is in the second year of testing the IQWST curriculum in her sixth-grade classes at P.K. Yonge.

“I would not go back teaching in my old traditional approach,” she says. “The students are learning to think about science concepts and finding answers to some of their questions on their own through inquiry.”

Addressing concerns that science education has become too focused on definitions and terms, Cordero says IQWST has “more emphasis on the application of scientific terms than on memorizing these terms. By doing science they learn more about the process of how scientists work in real life. Using the vocabulary to explain real-life situations like ‘Why does the apple look red?’ allows the students to demonstrate what they have learned. It is not about learning vocabulary that they will forget in a week.”

Hayes says the program specifically focuses on rural districts, which often don’t have the resources to promote science.

“To catch up with our peers in other nations, we need to increase the size and diversity of our pipelines in science and math after high school graduation,” she says. “We must ensure that disadvantaged students in small, rural and high-poverty schools are afforded equal opportunity to succeed in a cutting-edge science curriculum before they reach high school.”

Sharon Kinard, a science teacher in Putnam County, says she and her colleagues really appreciated the grounding in physics and chemistry they got from Hershfield, UF physics Professor Mark Meisel and chemistry Professor Ronald K. Castellano.

“Anytime a teacher enters a classroom confident in his/her content knowledge and comfortable with the curriculum, it is a benefit to the students,” Kinard says. “I don’t believe any curriculum is perfect, but I see IQWST as the most complete, coherent and engaging I have experienced.”

A few months into the new school year, Kinard says the value of the training and the new curriculum is more evident.

“I am more comfortable with the curriculum and with science in general,” she says. “I interviewed several students in one classroom and they talked about how much more they liked science. One young lady expressed an interest in chemical engineering as a result of her changed perceptions.”

“Sixth-grade students are not thinking about college yet,” Cordero adds, “but I have received comments from some parents who say their children have acquired a particular love and interest in science because of the new ways of learning.”

This article was originally featured in the Fall 2012 issue of Explore Magazine.