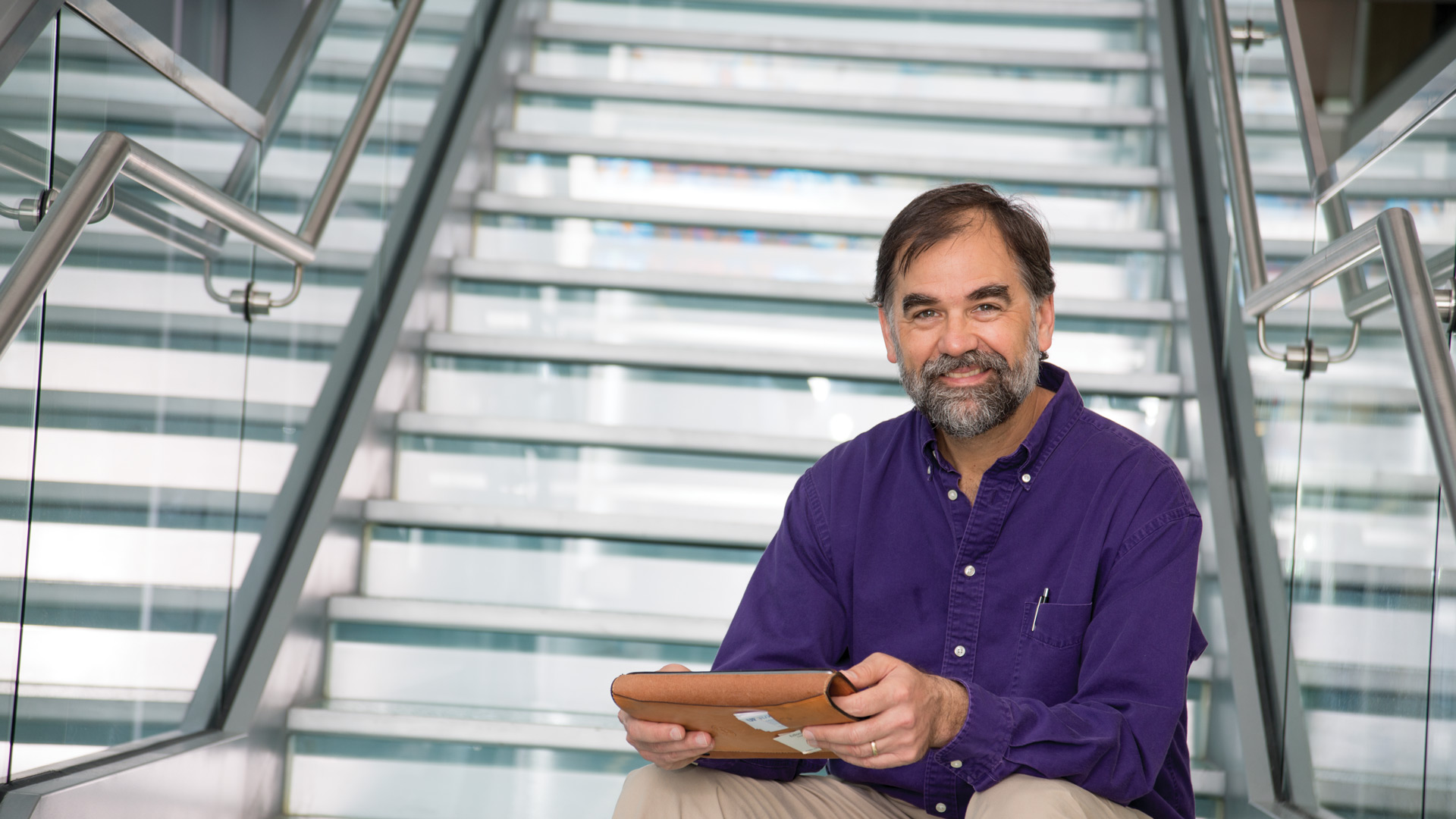 But until recently the trails were so faint that scientists couldn’t see them. Now, through the use of increasingly powerful mass spectrometry and nuclear magnetic resonance, the tell-tale signs of countless processes occurring in our bodies are being revealed.

“By measuring metabolites, we can get a unique window into health and disease. Metabolites keep everything going. They convert food into energy. They allow cells, tissues and organs to communicate. They’re the starting materials for DNA, proteins and cell membranes,” says Arthur S. Edison, a professor of biochemistry and molecular biology in the UF College of Medicine.

There are many twists and turns on the road between our DNA and our observable traits — from hair color to cancer tumor. Metabolites offer clues to what’s occurring along the way.

By identifying which metabolites are present and at what concentration, the emerging science of metabolomics offers a new lens through which scientists can assess and understand the state of nutrition, infection, health or disease in an organism, whether human, animal, plant or microbe.

Humans are estimated to have thousands of metabolites, but scientists are still at the early stage of identifying and being able to consistently measure them.

The University of Florida is home to one of six centers funded by the National Institutes of Health to spur advances in metabolomics. In 2013, UF launched its Southeast Center for Integrated Metabolomics with a five-year, $9 million NIH grant.

The quest for metabolites typically involves either searching for specific compounds, known as targeted metabolomics, or cataloging all compounds in a sample, called global metabolomics. Databases of identified metabolites are emerging and expanding around the world. Scientists use these databases like nature enthusiasts use field guides, with the hope of finding a match or discovering a new metabolite among their data.

“Our biggest strength is that we really pulled together the major technologies in a significant way,” Edison says. “Many groups use one technology or the other. We’re going to find better ways to use technologies together.”

Edison jointly leads the UF center with Richard A. Yost, a professor and head of analytical chemistry in the UF College of Liberal Arts and Sciences.

The new center is part of the UF Clinical and Translational Science Institute, which over the last five years has supported the development of biomedical mass spectrometry at UF. When the NIH funding announcement presented an opportunity to integrate and expand metabolomics resources across UF and with external partners, the CTSI provided resources and infrastructure to help create the new center. The center’s partners include Sanford-Burnham Medical Research Institute at Lake Nona, the National High Magnetic Field Laboratory, Ohio State University, the University of Georgia, Imperial College London, the University of Geneva and industry partners IROA Technologies and Thermo Fisher Scientific.

Metabolites are identified based on their molecular weight. Mass spectrometry is highly sensitive and can detect minute quantities of such compounds. The process starts with a biological sample — typically urine or blood. The sample is run through a mass spectrometer, which separates the sample into its chemical constituents by giving an electric charge to each component. The components then travel different paths through the device so they can be precisely identified and their molecular weight reported.

“Metabolites are numerous and remarkably diverse in terms of their structures. They display different sizes, polarities, and other properties. We have technology platforms that allow us to generate a broad and comprehensive profile of a vast number of unique metabolites,” says Stephen Gardell, senior director of scientific resources and an associate professor at Sanford-Burnham. Gardell leads the center’s mass spectrometry services with Timothy Garrett, a research assistant professor of pathology, immunology and laboratory sciences in the UF College of Medicine.

One of the challenges for traditional mass spectrometry is that it relies solely on molecular weight to identify the metabolites it detects. The heavier a metabolite is, the more molecular compounds there are that could yield a particular weight.

Imagine trying to guess what’s inside a package based only on its weight, but without being able to see its shape or size, or sense what happens when you shake it. That’s where nuclear magnetic resonance comes in. Using NMR is like x-raying the package to see what’s inside — which, in the case of a metabolite, is atoms. To identify atoms and their location in complex molecules, NMR tracks the spinning of atomic nuclei in response to magnetic fields.

“If you have an unknown chemical that doesn’t match any of the databases, you almost always need NMR to get the real atom connectivity. It’s close to impossible to get the identity of a new compound with just mass spectrometry. NMR and mass spectrometry together are an important part of the identification of unknown biomarkers,” Edison says.

Not content to make do with the limitations of current technologies, Edison’s research group is pioneering the development and use of some of the world’s most sensitive NMR probes.

Edison leads the center’s NMR services with Glenn Walter, an associate professor of physiology and functional genomics in the UF College of Medicine. The NMR core’s facilities hum with activity. Shakers the size of tanning beds jostle their incubating inhabitants: worm-like nematodes that serve as model organisms for metabolomics experiments. Edison and his team migrate among computers, freezers and robots. Ladders lead to the top of two stately magnets processing samples in the National High Magnetic Field Laboratory’s Advanced Magnetic Resonance Imaging and Spectroscopy Facility at UF.

The use of different technologies adds to the complexity of metabolomics data. The center’s bioinformatics core helps ensure high-quality, standardized data — regardless of the technology used — along with a robust set of tools researchers can use to analyze their data.

The bioinformatics core is led by Lauren McIntyre, a professor of molecular genetics and microbiology in the UF College of Medicine. The core is developing the workflows, infrastructure and automation that will enable the center to process

thousands of samples from researchers.

“When we’re doing it well, it will be almost invisible to everybody,” McIntyre says.

But data generated by the UF center does not all stay at UF. A central tenet of the NIH consortium is that all metabolomics data generated by the six centers with NIH support will be deposited in a national data repository and coordinating center, which is housed at the University of California, San Diego. The data center is led by Shankar Subramaniam, a professor of bioengineering at UCSD.

Subramaniam outlines five challenges to working with big data that are relevant to biology and his center’s work with the metabolomics consortium — organizing the data; developing standard ways of naming the data; integrating the data; making sense of the data once it’s integrated; and ultimately using the data to determine causality.

Making sense of the data involves looking for patterns. “With patterns in biology — it’s not like looking for a needle in a haystack. It’s like searching for hay in a haystack. The whole area of data mining and statistical learning from data becomes very important,” Subramaniam says.

Metabolomics produces big data, but not on the scale generated by Wal-Mart or Wall Street. Integration with other “omics” such as genomics, proteomics and transcriptomics will be necessary before scientists can relate metabolites to changes in genes, proteins and the regulation of cell behavior, and that will cause the data sets to grow dramatically.

“One of the advantages we have at UF — it’s a very interdisciplinary and diverse place,” Yost says. “We have computer scientists and engineers who think about big data, scientists who create instruments that make big data, and physicians who use that data to answer biomedical questions.”

Erik Deumens is one of those computer scientists. Deumens directs UF Research Computing, which serves the UF metabolomics center’s data processing and storage needs. Resources such as UF’s HiPerGator supercomputer and the Internet2 high-speed network connection make it possible for UF researchers to collaborate and compete in the big-data arena.

“The Southeast Center for Integrated Metabolomics is bringing together different aspects of people’s metabolism and all kinds of information about health and biochemistry processes. You gather all the data, put it one place and have a chance to look at it from a new point of view. We’re the enabler of that next step,” Deumens says.

Innovation in data generation is a hallmark of the center at UF.

“Metabolomics is the ultimate healthcare platform, but it won’t be useful to anyone until you get the time it takes to do it and the time to understand what it’s telling you down to something reasonable. That’s what the NIH centers are going to do,” says Chris Beecher, founder and chief scientific officer of IROA Technologies, one of the UF center’s partners.

Beecher is developing a technique that is transforming how metabolomics data are generated. Called isotopic ratio outlier analysis, or IROA, it tags all molecules that come from a living system prior to running samples through a mass spectrometer. Those tags allow scientists to identify all of the signals from the living system and ignore all of the other “noise,” or signals from non-living systems that result from the mass spectrometry process — a major hurdle in metabolomics.

Innovation is similarly thriving in the UF center’s advanced mass spectrometry core led by Yost. Even amid a spring break void of students, traces of his research group’s creative spirit abound. On Yost’s table, a bobblehead of Nobel Prize-winning physicist Wolfgang Paul knowingly nods next to a specimen of Paul’s handiwork: a quadrupole mass analyzer, four rods neatly bound together.

As it turns out, Yost spent a great deal of time tinkering with the quadrupole as a graduate student at Michigan State University. Together with his advisor Chris Enke, he conceived of the computerized tandem quadrupole mass spectrometer. Scientific reviewers for the National Science Foundation did not believe it would work, but the Office of Naval Research was willing to chance that it might. And that chance paid off. Today it is the most common mass spectrometer in the world, with sales of nearly $1 billion each year.

Yost’s lab is devoted to pushing past the folklore to cultivate instrumentation breakthroughs. His team is now focused on advancing imaging mass spectrometry for tissues. Instead of applying mass spectrometry to the usual urine or blood samples, this technique applies mass spectrometry methods across a section of tissue. The idea is that the spatial relationships between metabolites could convey a lot of information with respect to what’s happening in an organ, for example. Processing a blood sample can reveal how much glucose or lactate is present in the blood, but it doesn’t indicate what those levels are in the liver or heart or brain.

Over time, as these new technologies and methodologies are developed, tested and refined, they will become part of the UF center’s service offerings for investigators. The center also offers training and pilot funding to help scientists access and use its services.

A strong demand for metabolomics already is emerging. In its first six months, the center received close to 100 inquiries from investigators at nearly 30 institutions. Investigators are coming to the center with a range of questions for which they hope metabolomics might yield clues. Projects in discussion are diverse and stimulating. They include looking at the effects of stress during pregnancy on a mother and her fetus; metabolomics approaches to drug discovery in microbes; studies of the physiology of human pathogens; and studies of metabolic disease in humans and animals.

“We’re at this ‘wild west’ stage of trying to figure it out. I’m confident this consortium will point the field in a better direction in five years. Everything won’t be solved, but it will be much clearer what you can do and the importance of it,” Edison says.